The Secret to a Starfinder Vesk Mystic? Eat a Bowl of Oatmeal.

When I make a new Starfinder character, I eat oatmeal. 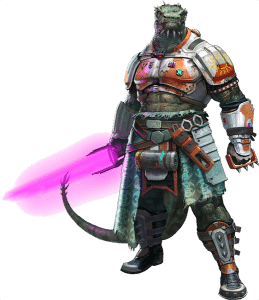 The Mystic is one of the core classes in the new Starfinder Core Rulebook. In essence, a mystic is the Starfinder equivalent of a cleric, but there are some subtle, spacey differences. I wasn’t certain how the math of Starfinder would work out, so to be safe, I figured it would be helpful for our party to have a healer. When you are learning a new game system, it’s never a bad idea to have a character toss up some prayers.

I decided to go with the Vesk as the race, simply because the Vesk seemed like one of the worst choices for a mystic, considering that a Vesk is a huge, burly lizard race. With the Mystic being a Wisdom based character, the Strength bonuses of the Vesk wouldn’t help one iota. Play against type, as my grandma used to always say.

My grandma never said that. Now, I needed a little bit of a hook, a backstory for my Vesk Mystic, the character I decided to name Bokemper. This is where the oatmeal came in. I’ve been trying to regularly eat oatmeal for lunch, mainly because I’m getting old. I was reminded of this when I tried to touch the basketball rim a couple weeks ago. This used to be something I could do with ease. Now? Not so much.

But I didn’t just want to make an old character. I wanted Bokemper to be older, yes, but I wanted to years to have stolen something from him. So my concept was that Bokemper was a Vesk who fought in the war that was outlined in the Starfinder Core Rulebook.

Years ago, Bokemper had a sharp military mind and was a great soldier. Let’s call him a level 8 soldier. But his outfit was decimated in a skirmish on some backwater planet and Bokemper was taken as a prisoner of war. While locked away, Bokemper’s physicality was taken from him through torture and abuse. He’s now soldier level zero. 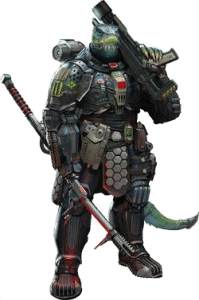 While his mind might still think tactically, Bokemper can no longer physically perform the combat maneuvers (he’s a big Vesk, yet non-optimized in terms of game mechanics). He can’t touch the rim anymore. Yet he has gained something as a POW.

Playing Bokemper as a mystic means that he needs a high Wisdom score. I imagined that as difficult as his experience was physically, it was even more grueling mentally. So Bokemper found Sarenae (I’m not yet familiar with the pantheon of gods in Starfinder, so I just went with one I knew from Pathfinder).

Bokemper turned to religion for hope, and that was what got him through. Now physically broken, but exceedingly wise, Bokemper has a new mission in life: he wants to make broken things whole. That makes him a perfect healer.

As you may have guessed, I had a thought of John McCain when I was imagining the concept. And I was eating oatmeal when I drew him up, so I cast him as Wilfred Brimley, figuring that a big lizard creature might have a voice like the lovable Quaker Oats spokesman. 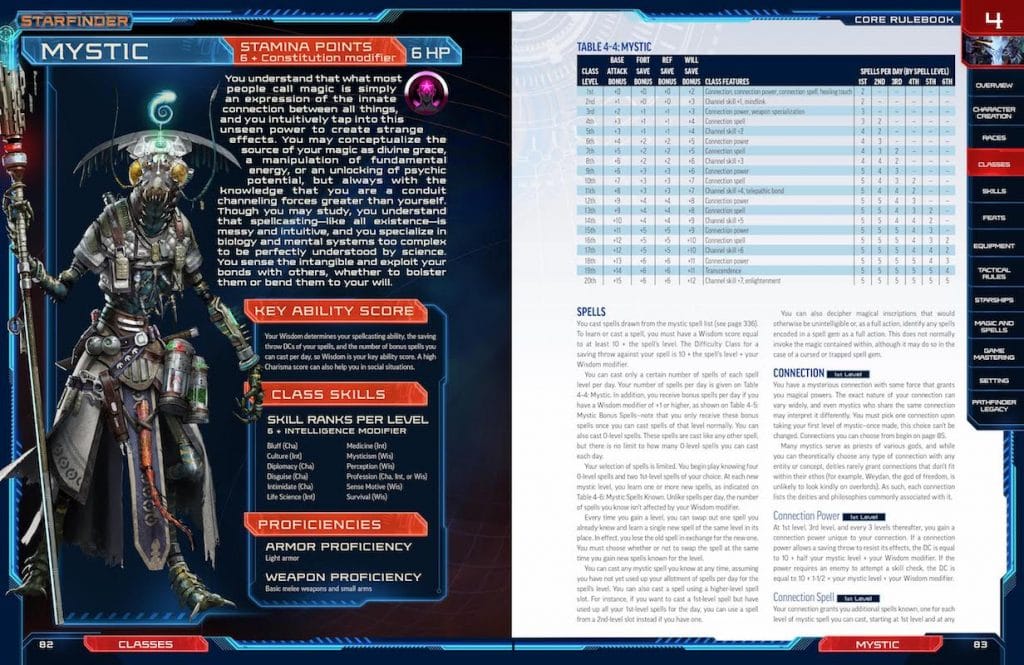 Let’s wrap this up with some bullet points that will help you better understand and play a Starfinder Vesk Mystic:

The Starfinder Core Rulebook does a wonderful job with its core classes and races. The addition of themes is icing on the cake. Players feel like they can create interesting character with a variety of options.

I have Wilfred Brimley walking around and casting healing spells as he telekinetically hurls objects at bad guys. That’s been fun for me. I bet there is a Starfinder character that will be fun for you.