Zed-Words: A D&D 5e Encounter Idea to Spice Up Your Game

I did a little homebrewing for this one! I took your vanilla zombie from the Monster Manual (CR 1/4) and added the Loathsome Limbs table from the Strahd Zombies (pg. 241 Curse of Strahd). Here is what that table says: 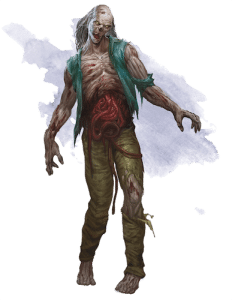 Whenever the zombie takes a least 5 bludgeoning or slashing damage at one time, roll a d20 to determine what else happens to it:

If the zombie is reduced to 0HP, all parts of it die. Until then, a severed part acts on the zombie’s initiative and has its own action and movement. A severed part has an AC of 8 and any damage it takes it subtracted from the zombie’s total HP. 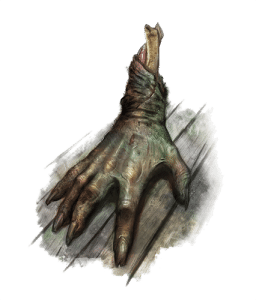 So if you play this encounter right, limbs and heads will be everywhere–each moving and attacking on its own until the zombie is killed outright. And if your party has never encountered a Strahd Zombie, they’ll get all nervous when they deal 5+ bludgeoning or slashing and you ask them to roll that d20. But imagine their surprise when it lops off a limb and changes the battlefield in a fun way!

Guess what? You can even submit your own encounter idea! Just click here.

Up: The Reckoning (Or How a Beloved Pixar Film Almost Tore Apart Nerds On Earth)