Review of Dungeon Hustle: A Small Box Co-op to Add to Your Collection 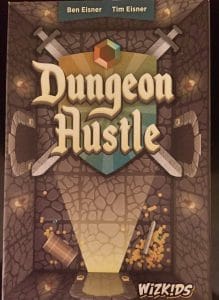 Things have been a little hectic in my little corner of terra firma. In the last few months, we sold our house, my son graduated from high school, we bought a new place (which is currently under construction), and we’ve moved into my parents’ basement until our new house is ready.
Needless to say, there has been plenty to celebrate. Also, needless to say, there have been plenty of times when I just wanted to take a sword (or a scroll of fireball) and just go to town. So, I was pretty psyched when Clave told me about a board game that sounded like just what the doctor ordered.

I’m not typically a competitive player. I like to game for fun, and to share with family, friends, or even like minded strangers. Because of that, and because I like games that I can use therapeutically (to help people work through challenges in a safe and supportive context), I’m a big fan of cooperative games: everything from good ‘ole D&D (and now Starfinder) and Forbidden Island, to Pandemic and Flash Point: Fire Rescue.

The great thing about cooperative games is you all win (or lose – less great) together. You learn strategy by talking through your turn and getting input from the other players. This can be a big help when you’re learning a new game. You’ve got the total hive mind going to help remember rules and point out options. The big challenge with cooperative games is, if you let one of those sneaky type A personalities (OK, they’re typically not very sneaky–more large and in charge) near the table, they can end up dominating the game and basically controlling every turn.

With those reasons in mind, I happily invited my family to play Dungeon Hustle from Wizkids with me. The first time I played through Dungeon Hustle, my wife (the Mage), my dad (the Cleric), and my son (the Fighter) joined me (the Rogue); my mom was there too, looking on and actively learning the game).

Dungeon Hustle is basically a dungeon crawler where 2-4 players take on the role of your basic fantasy RPG archetypes (the aforementioned Mage, Cleric, Fighter, and Rogue) to do your best murder hobo impressions: slaying beasties and hoarding treasure… treasure which will, of course, be used at a later date to help improve the lives of the neighboring townspeople, obviously.

The dungeon is randomly generated using a set of 96 dungeon tile cards, laid out into a 7×7 grid (similar to Forbidden Island). The “hustle” part of the game is that while you are collecting items, completing quests, and helping those monsters on their journey to the afterlife, those very same monsters are trying to escape the dungeon. If too many monsters escape, the game is over.

Let’s start with the setup. There are 4 corner pieces that have special features that are used to anchor the dungeon. Three of these pieces hold quest cards (one of which will also act as the monster spawn point) and the fourth is the Treasure Trove where you will place item cards (more on these in a bit).

Then, the rest of the grid is filled out by placing dungeon tiles from a shuffled deck. The remaining cards are placed in a draw deck in the center of the dungeon (this draw deck also serves as the monsters escape point).

There are four monster pawns in the game. Three are placed in the dungeon to start. Monsters will start at the outside edges of the dungeon and work their way towards the center. Then the players will take turns doing a dungeon hustle (and now I have disco music playing in my head).

Do the Hustle. Each dungeon tile has a picture of an item on it: a sword, shield, scroll, potion, or key. The item on each tile can be one of six colors: red, orange, yellow, blue, purple, or white.

On your turn, you start at the outside edge of the dungeon (on your first turn, or start from your current tile on subsequent turns) and try to move as many spaces as they can (horizontally, vertically, or diagonally) on the same color. Your turn ends when you move onto a different color, one of the corner spaces, or a monster.

Then you add all of those cards to your hand. The items are useful in different ways. Swords and shields are mainly for fighting monsters, while keys are for buying items. Scrolls, potions, swords, and shields can also be used to activate your items, or to complete quests. You simply discard a tile to use it.

Then comes the monster’s turn. First, you’ll notice there is now a huge hole in the dungeon from all the cards you just picked up. So you draw from the deck at the center of the dungeon to replace the missing tiles. If a tile pops up with a claw mark on it, you have encountered a wandering monster. You can discard a shield card from your hand to defend against the wandering monster. (If you don’t have a shield card, then you must randomly select a card from your hand to discard (I hope you don’t lose a sword or a key).

Then, if you ended your turn on a space with a monster, you must fight that monster. The monster will then draw a number of cards based on how many times you’ve been through the draw deck). You add the number of swords drawn to the monster level, and that’s how many swords you must discard to beat him. You can use items you have purchased to defeat the monster, you may also use an ability of one of your allies to boost your attack or defense, although you must ask for help before the monster draws.

This is where the different archetypes come in. The cleric can give you a shield to block one point of monster attack, the other classes can grant you a +1 to your attack. And finally, you have your own class powers that may help. If you are the Rogue, you could use your pickpocket ability to draw another card. If you are the fighter, you may use your improvised weapon ability to count any card in your hand as a sword. If you defeat the monster he leaves the board and waits to spawn in later, and you get some gold (“I love goooooold!”).

If you lose, you must randomly discard a tile from your hand and move to an adjacent space, clearing the way for the monster to head towards the exit. Then like the fire phase in Flash Point, you find out how bad things get now, only instead of rolling to see where fire breaks out, you draw a dungeon tile to see what item and color will spawn a monster and/or allow monsters to move.

Ending the Game. Like the water level in Forbidden Island, you set a difficulty level that advances as the game progresses. Instead of moving the token when the water rises, you move the end of game token when a monster escapes. You lose when five monsters escape on easy (or four on moderate, or three on hard). However, if you can keep the monsters contained until you have played through the draw deck 3 times, you win!

Ending the Game – Epilogue. Now, while this is a cooperative game, there is a way to determine a single winner at the end of the game. Buying items will not only give you different boosts while fighting your way through the dungeon (for example a +1 to attack, or the ability to alter a tile in the dungeon grid), but they also will give you victory points. Completing quests work in a similar manner: they may grant you (and sometimes everyone) a particular boon, but you also receive gold and victory points. Spending gold to level up your player also gives you victory points.

Review of Dungeon Hustle: My Experience

The first time through, with some flipping through the book and ad lib calls, we won pretty easily. But I knew there was something fishy. We missed a few key points. For example, we were just spawning and moving monsters based on the item drawn, not also on the color drawn. That definitely gives the monsters a little dungeon hustle of their own.

We also missed that you have to use a card from your hand to charge an item or a power before each time you use it. We were just spending those suckers like… things that you spend really quickly without thinking (insert witty simile here).

There are still some things I have questions about. Some of the class powers we just had to guess at (so we didn’t use them). There is a card that comes with the game that describes what each icon is, but there’s nothing in the book about how those mechanics actually play out. They’re not so cryptic that you can’t make a reasonable guess, but I like to have things spelled out clearly.

I ended up playing through another time, just with my son. We did win. A couple of monsters did escape, but we racked up quests, and levels, and gold, and it was glorious. It also ran much more smoothly and quickly. The box says the game is playable in about 45 minutes. That was right on the money for our second play through. I have a feeling we probably still missed charging up a power or two in our game, but not being a type A personality, we were just fine with that.

We had fun spending time together as two murder hobos… I mean father and son.

The box is pretty compact, it would be easy to throw in a backpack and take on a trip. There’s lots of moving pieces (96 dungeon tiles, that doesn’t count the item and quest cards or little gold coins (“I love gooooooold!”), so a few plastic baggies or containers to cut back on lost pieces might be useful.

The artwork is simple yet engaging on the tiles, items, and quest cards. The icons, graphics, and fonts are all easy to read (says the guy with progressive lenses).

But the character cards and monster pawns are the real standouts. The artwork on those is great: bright, dynamic, and full of contrast (kudos to graphic designer: Brigette Indelicato).

There are a number of mechanics you have to stay on top of, but not so much that one or two games wouldn’t shake out. The different archetypes add their own flavor to the game, as do the items you can purchase, and the boons from quests. Toss all that in with the randomly generated dungeon and this game offers good replay value. And of course it’s a game that I could easily use therapeutically with someone who needs support with engagement, communication, emotional regulation, and social problem solving (anxiety, ADD/ADHD, autism, depression).

Final thoughts, if you like cooperative games and enjoy a fantasy setting, Dungeon Hustle would be a solid addition to your library.

[Disclosure: Wizkids provided Nerds on Earth with a copy of Dungeon Hustle for review.]