One of the challenges of being a Dungeon or Game Master is that you are constantly having to play tons and tons of characters. Sometimes, we just need some ideas about some characters that our adventuring party could run into. Here are 7 ideas that you can take and add into your game.

The angry punk rock girl. Sometimes your characters don’t need a villain; they need a foil, someone who can play against them and occasionally do something they need. In my current homebrew game, the adventuring party doesn’t have a rogue and there are times when they need someone to get them into something.

So I created a punk rock teenage girl rogue, who makes inappropriate jokes and shows up occasionally to bail them out and remind them of their failings. For an added twist, you can do what I did. In one of our early adventures, we had a character die and the party kept referencing that character. So the girl became the child of said hero but it wasn’t revealed until much deeper in the process. (And at some point, if a character dies, someone could pick up this character and play her moving forward.) 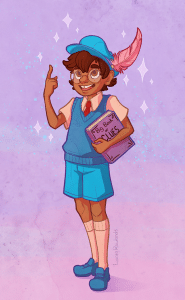 The know it all kid. In the Glass Cannon Podcast, they have Tom Exposition to show up and give them the information they needed in their early adventures. In The Adventure Zone, the heroes turn to the boy detective Angus McDonald.

In my game, we have a know-it-all kid who shows up and knows things, almost like a D&D version of Layla Miller. And it is always fun to play a kid who is wiser than he should be.

Bonus, give him a little brother or sister that he has to watch and take care of and you have an easy side quest hook when the sibling goes missing.

The failing widow or widower. First, people die all the time in campaigns. But in this case, make the death be of natural causes and have the adventurers meet the widow or widower whose dead spouses provided a much needed service to the town. But the living one isn’t able to meet the demand or do it well.

Imagine if your crafter of healing potions died and her husband suddenly couldn’t be the source the town needs for these items. This character is a sad one in some ways but it also can create a resource management issue that is good to introduce into adventures.

A craftsman who is terrible at their craft. So many times in roleplaying games we have interactions with merchants and craftsman, where we have haggled down a price, made a custom order, pick it up and everything works. But, what if the craftsman negotiates in good faith, works hard and delivers a dud. This NPC is an excellent test case for your party’s murder hobo tendencies. They will want to right away go to either violence or assume something nefarious about this NPC.

But the truth is….they are just bad at it. It helps if you make this NPC the only person in the town who can attempt something and have the characters roll to see if it works this time or not. And regardless, the craftsman should always defend it as the best work!

A bard rock star. Every town or village needs to have entertainment come through. So, take a favorite musician that you or your party loves and turn that person into a bard that shows up. And give him a quirk.

Regardless, it gives you a chance to play it up big and create a recurring NPC that can also be used to drive the plot forward, either as someone who hires them to join them for protection or, if the characters become bonded, as someone who sends for help when they need it.

The caravan leader. In the world of roleplaying campaigns, people are always going to be moving stuff. So create an NPC who takes whatever job there is to move item A to place B and repeat.

Eventually, you can have this merchant become more successful, potentially hire the adventurers for protection and even become the source for rare and magical items occasionally if your heroes are building up wealth. It helps if the heroes are based out of a smaller village or town but even in the big city, knowing a guy or girl who can move things can be important.

The brooding character with a secret. This NPC is just a fun roleplay. Have the party meet up with a character who is constantly talking about a dark, mysterious past. Really sell it over the course of several games sessions. You can to intrigue the party but not overdo it right away.

Eventually, you want to get to the place where there is a big reveal. Imagine a drow elf wizard who has the dark past of…having been a rodeo clown. Insert whatever wacky idea you have for the background but figure out a hook so that the party gets the reveal in a really bizarre side quest.

What are some other NPC ideas you have that can be added into a homebrew campaign to get the world some more flavor?

Glass Cannon Podcast: Episode 120 – A Matter of Life and Breath

Review of Dungeon Hustle: A Small Box Co-op to Add to Your Collection