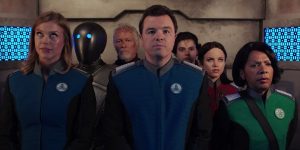 For some reason, the television show The Orville got past my nerd radar. Usually, a show like this will pop up in the pilot season and pique my interest. But Fox either kept this one relatively quiet or I just wasn’t paying attention.

And, to be honest, the elevator pitch didn’t sell me on this show. “Family Guy’s Seth Macfarlane has created a homage/parody of the original Star Trek series.” To me and my sensibilities, that reads like “Someone who doesn’t understand what is funny about Galaxy Quest wants to make Galaxy Quest.”

But I was willing to take a chance on it and after the first episode, I posted something along the lines of “No show is sure of what it is in the pilot” and I was willing to give it another chance. And I am grateful that I have. Because The Orville is producing some of the best episodes of Star Trek since the original Star Trek.

The Orville has three things going for it that make it really stand out. First, it is just removed far enough from the Star Trek universe that it stands out. The aliens are all original but they have that hint and reminder of the original series. The ships looks like the ships of Star Trek with some tweaks and changes. The colorful palette of the series is the vibrant colors of the original. It is almost like someone is making a really good fan version of the show, which is what appears to be happening. The only piece that they haven’t created yet is teleporting. 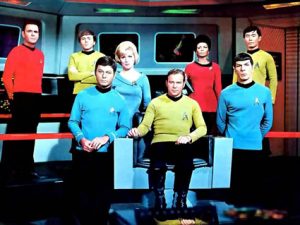 The second thing is that the show is episodic. In talking with my Dad about the original series, he made a great point; in some ways the OG Star Trek series couldn’t take the time to tell a long form story. Whereas nowadays if I miss a week or two of a show, I can quickly binge it on Hulu, in the past and at the time of the original series, if you missed a week, you were out of luck. Star Trek was even pre-VCRs in every home.

But the benefit of that is that it helped writers tell tight contained stories inside one episode. After a less than stellar start of a pilot, The Orville seems to be leaning into that, telling really well done episodes that are self contained and, bringing up the third thing that is making the show great: it is taking on social issues.

Now, if you are like me, you may not want to believe this but MacFarlane and his writers are dealing with real, serious social issues in a frank way that is really reminiscent of the first Star Trek series. Where the original show dealt with the issues like racism, today’s show has leaned into issues like gender identity in smart compelling ways. That isn’t to say there isn’t the occasional ooze that brings itself to demonstrate a large phallic device, but on the whole, it almost feels like the network said “Okay, but, c’mon give us some of that patented Family Guy humor, at least 4 jokes.” 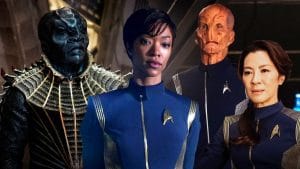 Yet, at the same time, CBS launched the new Star Trek Discovery series over the air and then moved the show to their own platform, CBS All Access. (Nerds are right to be extra frustrated that it feels like we are being asked to pay for a whole network’s platform for one show when, on the whole, the platform ain’t great.)

Where The Orville looks like the original series, Discovery looks like JJ Abrams inspired television adaptation, complete with its lens flares and dark shading and up-close combat. And while it would do better as a successor of the recent Battlestar Galactica series than Star Trek, Discovery seems to be hellbent on connecting itself with the original Star Trek series, by setting it just 10 years before the original series and (SPOILER) retconning the main character to be Spock’s adopted human sister. And all of this while telling a long cinematic story that none of the original writers would recognize as television.

Star Trek Discovery isn’t bad per se. For the kind of story the show is, it is an excellent version of it. But it also isn’t the best version of Star Trek on television right now. That unexpectedly goes to The Orville, which every fan of the original series should check out.

The Orville gets 9 out of 10 Nerds and Star Trek Discovery gets 7.5 out of 10 Nerds (and a stern look and deep sigh for not making the show readily available to the masses legally.)

A Video Introduction to Marvel Legacy #1