I am the Dungeon Master for a group that meets every Monday evening for around 2.5 to 3 hours. The group was a mixed bag in terms of game experience when we started and as their characters have leveled up, they are getting the hang of things, so I am thinking about some of the complexities of the game. For our group, one of the things that has been true is that combat encounters have become a slog.

Combat by definition is going to slow down at your table. In our group, where there are 5 players, our combat sessions can really slow down the energy at our table and make the evening disengaging. If you are waiting for 4 others players, plus NPCs to act before you act again, it can be something where it is easy to lose interest.

With that in mind, I have been thinking on some ways and ideas on how to speed up combat sessions. Here are some of the suggestions and rules I have or I am thinking about implementing.

How to Speed Up Combat in D&D or Pathfinder 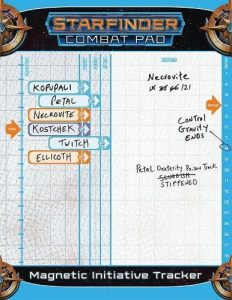 Initiative order is visible to the players. When it comes time for a player to act, I want them to:

I have used a variety of different ways to do this. One trick is that I use folded index cards across the top of my DM’s screen and we put the characters and NPCs in order as we roll initiative and start combat. Then as players are acting, I remind the next player that they need to get ready.

Similarly, we have toyed with having one of the players run the initiative order, so it is one less thing for the DM to focus on. There are various ones available but I really like the one that Paizo offers as both a Starfinder and Pathfinder option. It is magnetic, dry erase and works great for a player to help keep track of everything.

Players roll all their dice at once. It seems obvious but encouraging the players to role all the dice involved in an attack all at once can really streamline the combat session. Basically, you are cutting out at least 1 roll and maybe more.

For instance, we have a Ranger who often uses her Hunter’s Mark spell plus Colossus Slayer plus her arrow attack all at once. So, rather than having her roll each dice, she can roll her d8 for arrow, d8 for Colossus Slayer and d6 for Hunter’s Mark along with her d20 attack roll. If she hits, then we have the damage total. And if she misses, no big deal. 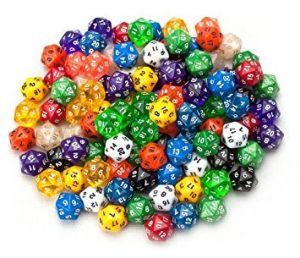 As Dungeon Master, I am now pre-rolling as much as I can. Recognizing that as my characters got to higher levels, it meant that I was throwing larger numbers of creatures at them to make it a challenge. And with more NPCs, it meant I was doing more rolling and that was slowing us down.

So I have done some rolls ahead of time now:

There are some things I am considering doing as well that I haven’t implemented yet. One idea is to have a 30 second clock and the PC has to make a decision about their move before the end of the clock. Some people will say that removes the tactics from the game but I can make an argument that it makes the game more like combat. You don’t have 5 minutes to consider your next move in a fight. You have to decide and then do it!

As I said before, in our game, the PCs are seeing hordes of creatures now, so someone suggested using them as one large HP pool and stat block versus rolling for zombie #11’s attack. That seems more fun and you can certainly role play it out as the horde is weakened and give players an idea of how they are doing. (“Two more zombies fall out of your strikes.”)

Finally, I am considering have a session or two where we use some of the alternative initiative rules that Wizards of the Coast released as an Unearthed Arcana in July of this year. It is definitely a different approach but one of the things I like about it is that it forces PCs to declare actions all at once at the top of an order and build from there.

And the different dice rolls based on action you are going to take intrigues me to see how it would play out in the game. If we playtest it, I will share with you all the thoughts our table has on it.

What about you and your table? What are some tricks and ways that you all have used to help make combat both fun and fast?