By Michael Adkins On Jan 1, 2018 Last updated May 16, 2018
Share TwitterReddItPinterestFacebookEmailPrint

In early 2016, IDW Games launched a Kickstarter campaign featuring a scenario driven miniatures game: Teenage Mutant Ninja Turtles: Shadows of the Past. During its 22 day lifespan, backers more than tripled the fundraising goal. The Kevin Wilson designed game was upgraded according to its posted stretch goals, and that’s what I set out to play with family and friends.

Spoiler Alert: It is amazing.

TMNT Shadows of the Past: Unboxing 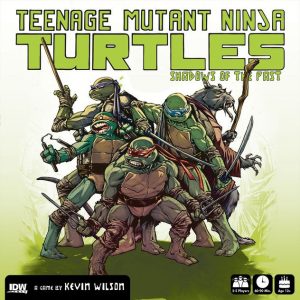 This game comes with over 40 minis of the turtles, villain leaders like Shredder and Old Hob, and a host of villain henchmen including the iconic Foot Ninja. They’re unpainted and not primed, but I actually saw that as a positive thing. Not everyone will see it that way, but I look forward to painting them all up!

In addition to the minis, you’re given the rulebook and two “comics” that serve as the scenarios.  Each comic features two books broken down into four battles; each explaining how to set up the board and the villain decks as well as outlining win conditions for the villains and heroes.

Then there are a metric ton of cardboard punch outs; pizzas for health, terrain, tokens of various sorts. But they’re kind enough to include all the bags you need to pack them up neatly when you’re done.

The game operates mainly by dice, and each hero gets a color-coded set (blue for Leo, red for Raph, etc) along with eight combat dice.

And lastly you’ll get a bunch of cards:

Everything is of a high quality. Even the rulebook is top notch! Nothing feels cheap.

TMNT Shadows of the Past: Gameplay

Shadows of the Past can be played by as few as two people and as many as five. With two players, one would play the villain and the other would control all four heroes. Obviously with the addition of more players, you can spread control of the heroes around. 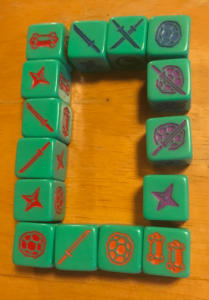 After each battle’s setup (villain deck, minis, terrain, etc), the heroes will roll their dice. The resulting symbols will permit them to move, make melee or ranged attacks, boost their defense, and utilize their Special Move cards.

They’ll take a couple of minutes deciding the order of their dice; not because they have to play them in a specific order, but because their turtle brethren (with the exception of Raphael) can use the dice they place on the outside edges of their line.

Once their dice are set, they decide which turtle goes first and they burn their dice to move and attack. They can also cash in Focus tokens to re-roll any disappointing combat dice. Focus is a limited resource for both the heroes and the villains and should be managed wisely! 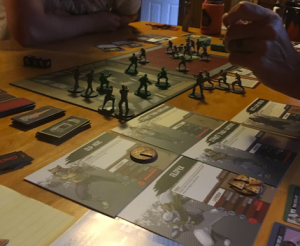 After each turtle’s turn, the person playing the villain gets to play two cards from his or her hand to move and attack with some number of the baddies in play. The villain cards will show which character(s) can move and attack (and how far/often) using symbols identical to those on the action dice of the heroes.

When an attack is made by either side, the combat dice are rolled. Hits are tallied versus the defense roll of the attacked, and HP (pizza slices) is lost. Heroes and villain leaders reduced to zero are KO’ed and can be revived using combat dice. Henchmen are removed from play, but can return to the battle at the end of each round during the villain’s spawn action.

Gameplay continues until either the heroes’ or the villain’s win condition is met.

TMNT Shadows of the Past: Theme

The Ninja Turtle theme is really, really strong in this game, and not just from an aesthetic viewpoint. The aesthetics are incredible, to be sure! Greasy pizza boxes as the area you stack your pizza slices for HP, color-coded hero action dice, franchise-familiar minis and art. It’s all there and it’s all good.

But beyond that, there are some further nice, thematic touches:

One thing I felt was missing was co-op moves. Don’t get me wrong: This game is amazing as is! But figuring out a way for a hero to leverage their dice to pull some sort of sweet move in concert with another would have been awesome! I just remember pulling those kinds of moves off in a lot of TMNT video games and would have liked to see a similar mechanic in the board game. I honestly have no clue how they could be done, but it was a thought I had nonetheless.

TMNT Shadows of the Past: Expansions 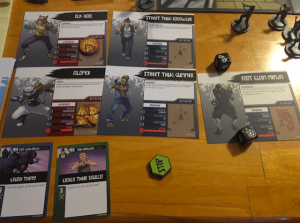 The game already has thee expansions:

Each comes with a new hero card, dice, mini, and Special Move cards along with a brand new book featuring four battles. Each costs less than $20 and provides an additional 4-6 hours of play? No brainers.

The game requires no more and no less than four heroes to play, so using any of the new characters means you sideline a turtle–but that’s not necessarily a bad thing. Splinter has a ton of focus and can use two Special Move cards per turn (as opposed to the limit of one for everyone else), Casey regains health when he rolls movement, and April also has high Focus and can, in certain situations, use two of her Special Move cards per turn, as well.

TMNT Shadows of the Past: Final Thoughts

I love this game! It is all I want to play right now.

I dig that gameplay is different whether you’re the villain (cards) or the heroes (dice). I absolutely love that win conditions aren’t just “knock everyone out!” That adds variety and strategy to each battle. And I think the replayability of each battle is rather high thanks to the randomness inherent in dice rolls and card draws, different combinations of heroes, and retooled strategies. In fact, my family wanted to replay Book 1, Battle 1 immediately after it was done and before moving to Battle 2 for these reasons.

I give Teenage Mutant Ninja Turtles: Shadows of the Past a tubular 10/10 Nerds. I love it. Everyone I’ve played it with loves it. Excellent showing from IDW Games and Kevin Wilson. No doubt!

[Discloser: IDW provided Nerds on Earth a copy of Teenage Mutant Ninja Turtles: Shadows of the Past and the Splinter Expansion for review.]