If you want to prepare a skeleton to have for your very own, follow these 8 simple steps:

Step 2: Carve away the flesh, taking care to leave the joints and ligaments intact.

Step 3: Poke a hole in a box and put the bones inside.

Step 4: Cover it with quicklime (available online!) and sprinkle it with water.

Step 6: Now place the box in a stream for a week so the running water will wash away the loose, decaying flesh.

Step 7: Scrap off any remnants of flesh and let the skeleton dry in the sun. The ligaments should have kept the bones together.

Step 8: Animate the skeleton with necromancy.

In a recent lecture at Columbia University, Oregon State University historian Anita Guerrini shared that the above instructions were written in the year 1543 (OK, I added Step 8). Guerrini recounted that Renaissance-era university students took notes on the above techniques, undoubtedly riveted by this particular anatomy class.

But Guerrini and fellow historians are still stumped as to where the university students were supposed to have found a corpse, since those instructions were not included among the professors’ archived lectures. Listen, we all know it was grave robbery.

With that gruesome story to spark our imagination, let’s roll some initiative!

Below is a Starfinder encounter inspired by the above story. Although this encounter is keyed specifically for Starfinder and it lifts and expands the story of a little-used NPC in book 3 of the Dead Suns adventure Path, you can insert it into practically any campaign for a little bit of flavor. The basic concept even works in D&D or Pathfinder.

Starfinder Encounter Idea: How to Prepare a Skeleton

The abandoned flat he uses as his laboratory is in the Splice, an unappealing industrial district in the necropolis of Orphys on the planet Eox. When the PCs discover the laboratory, read the following:

Rolling skill checks uncovers nothing as the numbering of the tubes is a red herring, because Shan Goulding attacks immediately upon discovering someone is interrupting his plans and 3 Ghouls spring immediately from the green-lit tubes.

SPECIAL ABILITIES
Overload (Ex) Using a full action, Shan Goulding can cause a powered weapon to explode, using the weapon as a grenade of the weapon’s level.

Target Tracking (Ex) As a move action, Shan Goulding can designate and track a single foe, gaining a +2 to attack rolls against that target.

Distracting Hack (Ex) Shan Goulding can hack a computer to distract a foe, such as with a sudden noise or image. 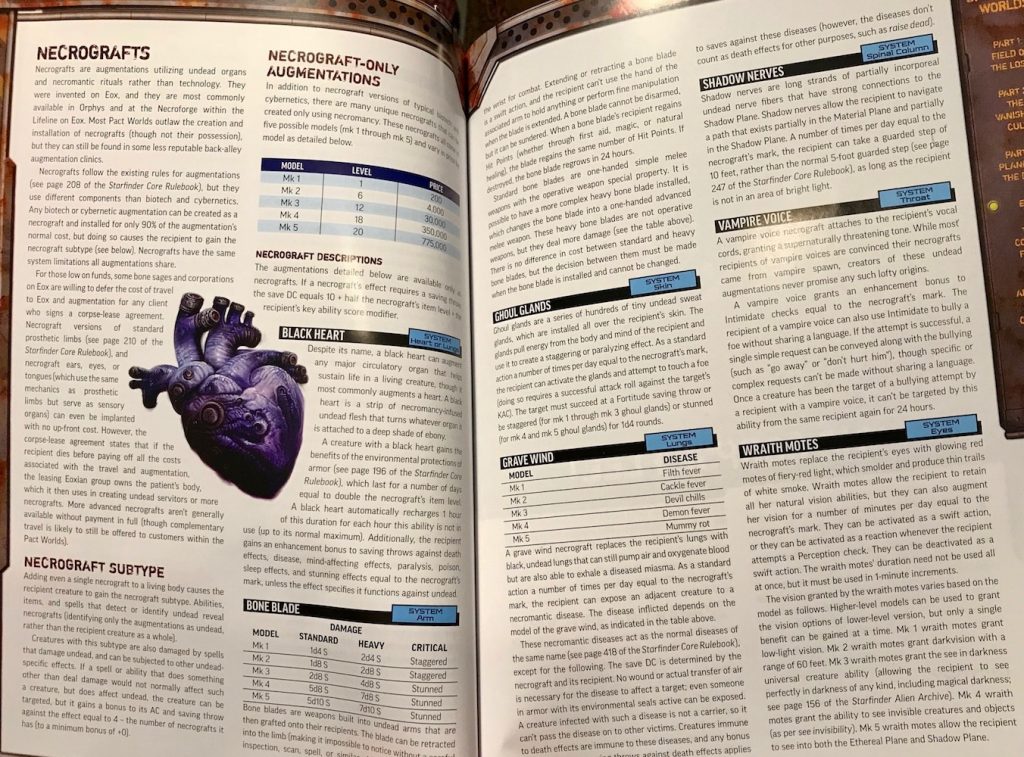 The encounter also features three Ghouls, stat blocks of which are in the Alien Archives of part 3 of the Dead Suns Adventure Path by Amanda Hamon Kunz and should soon be found in the Starfinder SRD (System Reference Document). The only difference is that each Ghoul should feature one Necrograft, augmentations that utilizes undead organs. Shan Goulding was experimenting on the Ghouls before he attempting to install the necrografts on himself. 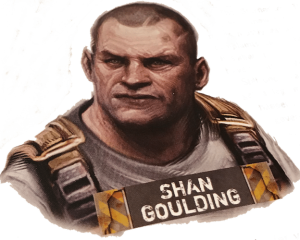 The NPC, Shan Goulding, is taken from page 23 of the 3rd installment of the Dead Suns Adventure Path. Being that Starfinder is so new, there is understandably a lack of published content. But while Shan Goulding doesn’t appear as a combatant in the AP, his brief appearance created an opportunity to expand his story into a side encounter.

The inclusion of the ghouls and their necrografts raises the CR level of the encounter slightly as per the balancing rules in the Game Mastering section of the Core Rulebook. But I believe that players are typically crafty and should be able to handle the challenge.

The encounter awards 2,000 XP, in addition to the above gear that PCs can loot.

It is absolutely worth reading picking up the Starfinder AP and the Alien Archive, if just to let your imagination soar with the new monsters and settings. And consider designing unique encounters around some real life history. Sometimes the truth is stranger than fiction.