Annihilation: An Ambitious Sci-Fi Movie that Fails to Stick the Landing

This weekend saw the release of Alex Garland’s latest film Annihilation, which is based on the first book in a trilogy called The Southern Reach, written by Jeff VandeerMeer. Given the nature of Garland’s previous film Ex Machina, which is a deep philosophical dive into the nature of humanity and technology, it isn’t a surprise to see that Annihilation is again a deep reach into the psyche of the characters within, as they deal with an alien presence that is sweeping across the southern North American landscape. The ambition of the film is clear and, at times, reached but it falls apart in the final act when the film seems to veer in a wildly different direction.

What Annihilation Does Well 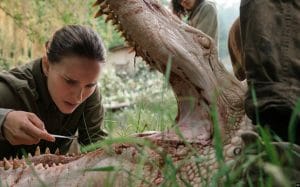 The basic premise behind the film is that after some alien presence lands in southern American coast, a shimmery wave of light begins to expand out. And after a year of explorations, the powers that be recruit Lena, a biologist and former soldier (played by Natalie Portman), to go into the zone, as the only known survivor is her husband, who led a Black Ops team into the zone, returned a year later and then immediately began to go into major organ failure. And in the interest of trying something new, Lena is part of a team of all women, who each have a specific role to play on the team. To say much more would give away the plot of the film. But, first, there are some things that work extremely well in the film. 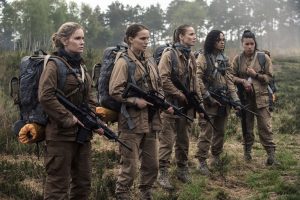 First off, the cast is incredibly well done. In addition to Portman, Jennifer Jason Leigh, Gina Rodriquez, Tuva Novotony, and Tessa Thompson are all stellar members of the cast and the expedition party.

In particular, Rodriguez and Thompson deserve praise for playing dramatically against the roles they are most known for. Rodriguez is a tough as nails former paramedic – a very different role than the titular Jane the Virgin from her television series. Thompson does a dramatic shift from her scene stealing Valkyrie in Thor: Ragnarok and plays a quiet, bookish character. Each of the characters brings something new to the table and each is given a chance to shine. In a world where science fiction movies in particular tend to be male dominated spectacles, this film shows that you can absolutely tell a good story with a great cast with minimal male participation.

Second, the cinematography in this film should win awards. It likely won’t because it has the curse of being released in February, a time where most studios release the films that they seem to be unsure of. But the film does two things that seem to be in stark contrast.

First, it is deeply infused with color; from the barrier itself to the flora and fauna that exists within it, you can tell the director worked hard to make sure that color was welcome, prevalent; as the film moves on, it is a genuine eery effect that moves the audience from loving color to seeing it as a deep, troublesome foreboding symbol.

Second, it uses light well. As much as this movie is fueled by color, it isn’t fueled by light. Darkness, shadows and more all exist to paint the picture of this new found world being made by the Shimmer. Even bright sunlight seems distorted and not quite pure. I was fascinated how Garland and his team meshed those two things.

Trouble With the Final Act

But as much as I loved the first 90 minutes of this film, the last act of it is startling and hard to understand given the rest of the film. As someone who has not had any exposure to the books involved, I have heard that there are stark changes and adjustments in the film. And while that isn’t unusual as a work is being adapted, the unbelievable jarring feeling this movie has makes me curious to see if it was being something different and coming back to try and finish similar with the book or if the film veers wildly off-course in this last act, in contrast to the ending of the book. Regardless, the ending to the film suggests that they are leaving open the possibility of returning to the rest of the books to finish the series.

With a budget of $55 million, Annihilation is one of those works that as a fan of genre, I am really pulling for. The medium sized science fiction film deserves to have a life beyond Netflix acquiring titles that studios suddenly get cold feet about. (I’m looking at you Cloverfield: Paradox.)

That said, the ending of this film isn’t going to help it. As someone who is open to and willing to let a movie stretch me, this one almost broke me and, based on the reviews of critics and audiences, it may have broke a lot of people. If you are willing to be tested by a film’s structure and story, then the visuals alone make this film one worth seeing in the large screen of a theater and I give it 6.75 Nerds out of 10.

Little Wars: A Game for Boys of Twelve Years of Age to One Hundred and Fifty and for That More Intelligent Sort of Girl Who Likes Boys’ Games and Books