This past Friday, the team at Dungeons and Dragons showed off the cover for their next book, Mordenkainen’s Tome of Foes. And while the book still hasn’t showed up on Amazon quite yet, there is some information out there that helps us understand what the book is going to be all about.

Mordenkainen is a wizard that was originally a player 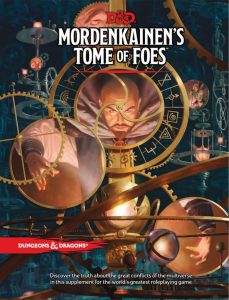 character by Dungeons and Dragons creator Gary Gygax. The legend says that he wanted to experience the game as a player and, having convinced someone else to DM occasionally, Gary created Mordenkainen as a wizard in 1973.

TSR and Wizards of the Coast have done some things with the character over time but, to me, here is the most important aspect of the character: he is from the Greyhawk world. Since the fifth edition of DnD has been out, everything has been set in the Forgotten Realms world, so this book signals the first time there may be an adventure into the idea of multiple worlds crossing over in this one game.

As he is currently thought of, Mordenkainen serves as someone who is at work trying to always balance the forces that are at work in the universe. It is his belief that no one group should have the power above any other. This idea is especially interesting given that there has been talk that half of the monsters in the book are going to be at a much higher challenge rating (10 or higher!) than the previously released books.

Welcome to the Multiverse

The information that we have on the book seems to hint that they are going in hard on the idea of a multiverse. Obviously when the book is going to be allegedly penned by a wizard from another realm, this seems like a no brainer. But you can see even more when you look at what information is available on the Penguin/Random House page about the product:

“Discover the truth about the great conflicts of the D&D multiverse in this supplement for the world’s greatest roleplaying game.

This tome is built on the writings of the renowned wizard from the world of Greyhawk, gathered over a lifetime of research and scholarship. In his travels to other realms and other planes of existence, he has made many friends, and has risked his life an equal number of times, to amass the knowledge contained herein. In addition to Mordenkainen’s musings on the endless wars of the multiverse, the book contains game statistics for dozens of monsters: new demons and devils, several varieties of elves and duergar, and a vast array of other creatures from throughout the planes of existence.” 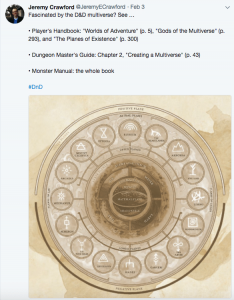 The decision to expand into a multiverse is going to be met with praise from a great deal of old school DnD players. My suspicion is that this isn’t going to be a fully playable campaign set in another world; instead this move is a wise as Solomon move that will split the baby of the multiverse adeptly into 2 parts:

The danger of going full on in different universes is that the move could create confusion among new fans and, if the current system has a strength, it is how new player friendly it is. So I suspect this book will give some ideas and options on the multiverse, mainly pulling creatures out to show up in the current realm but that it won’t be a full on move away from the current world that they have done excellent work building up. When pressed on it over the weekend, Jeremy Crawford offered a tweet that points to some places to look for more ideas about the multiverse in already released products!

We have seen these new races, though not likely in finalized form, in the recent Unearthed Arcanas.

Will Mordenkainen’s Tome Find A Home In Your Library?

Since the initial announcement, the folks at Wizards have put out more information as well. For a fairly good overview of the product, you can check out this interview of Mike Mearls by Todd Kenreck for DnDBeyond.

So what do you think of what we know (and are surmising!) about Mordenkainen’s Tome of Foes?  Is it a sight unseen purchase for you?  Let us know by starting or joining a conversation about the upcoming book in our Character Sheets group on Facebook!