By Clave Jones On Mar 5, 2018 Last updated Mar 5, 2018
Scene from the planet Castroval. From "Temple of the Twelve," an adventure for the Starfinder RPG.
Share TwitterReddItPinterestFacebookEmailPrint

Located in the Australian Outback, the majority of Coober Pedy’s 1,600 residents live underground, supported by subterranean homes, restaurants, and even a church that lies beneath the surface of the Earth.

Above the surface are temperatures that can reach 117 degrees. Solar panels provide power, ventilation shafts provide air, and an underground spring provides the drinking water. (Visit Wired for some stunning photos of Coober Pedy.)

Most folks earn their living through mining opals, but tourism is big too. Mad Max Beyond the Thunderdome was filmed there but there is no word on whether Tina Turner settled into one of the “dugouts,” the nickname for Coober Pedy’s below-ground residences. Speaking of names, the aboriginal name Coober Pedy literally means “boys in the hole.” 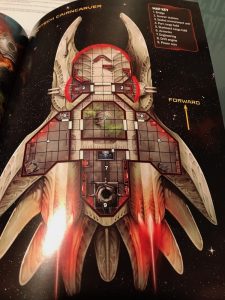 Unbeknownst to PCs, the horizontal hatch they discover just above the ground’s surface is actually a starship–The Coober Pedy–that had submerged ages ago into a boggy region of Ukulam on the planet Castroval.

Not an Eoxian starship, yet built off the Thaumtech Cairncarver starcraft framework, The Coober Pedy had previously been long abandoned. Yet for the past several weeks has been inhabited by an oddly belligerent Hesper, his human lover, and their small assembly ooze that they curiously treat as a pet.

The horizontal hatch is partly corroded and has scrambled componentry from the inside, due to the work of the work of the Assembly Ooze. A DC 15 computers or engineering check is required to “hot wire” the hatch open. Once inside, read the following:

The electronics of this small 20×20 chamber are nearly stripped bare. The lighting system is no longer functional. In fact, it’s no longer there, the necessary components having been seemingly melted or striped away. The electronics of the entry hatch are melted away from the inside as well, explaining the difficulty you had in opening the hatch.

The hair on your arms stands on end and you see tiny flecks of light flit around the room like drowsy fireflies. Electronic debris sparks in the Northeast corner of the room. There is a door in all four directions, but the southern door looks hopelessly fused shut, the necessary electronics wholly removed.

Players who roll checks will discover faint radiation, although it’s not severe enough that player’s environment filters won’t handle it. A Thunderstrike Pulse Gauntlet and Thunderstrike Sonic Pistol–both with the broken condition–are among the pile of debris on the floor.

The haphazard look of the entry should obscure the fact that the players have dropped down into a submerged starship. If the players go to the east or the west, they discover the mechanical saboteur–an Assembly Ooze!

The stat block for the Assembly Ooze–a creature known for deconstructing electronics into their component parts, then reassembling them into random, oft broken objects–can be found at the Starfinder SRD (System Resource Document) or on page 16 of the Alien Archive.

Due to its sloppy programming and exposure to radiation, the Assembly Ooze is erratic and should present a quick, easy fight for the PCs. This encounter is a mechanic’s dream as the following items lay scattered across the cargo hold:

Whether the Assembly Ooze is encountered in the aft or starboard hold does not matter. The opposite hold is empty, except for the following items scattered across the hold’s floor, all with the broken condition:

The doors to the armories and both gunnery stations as fused shut, having had their electronics mined by the Assembly Ooze. Repairing those doors is outside the scope of this quick encounter.

PCs should now have made the connection that they are in a starship, sunken into the bogs of Castroval. From the center environmental entry, the PCs can now go north, which takes them to the bridge of the Coober Pedy. Read the following:

This is clearly the bridge of a small starship. The hair on your arms is immediately charged with static electricity. In the center of the room is a handsome humanoid creature standing approximately 4 feet tall. He is gesturing dramatically toward a tall and stunning dark-skinned woman who is clearly trying to withdraw from the situation. Upon seeing you, he spits, “Who are you? Have you come to take what is mine?!?!” and attacks immediately.

The human woman is Legs Thunderdome, the increasingly unenthusiastic and grudging attendant to the hesper Izear “Ike” Luster. The stat block for Izear can be found at the Starfinder SRD (System Resource Document) or on page 62 of the Alien Archive. Hespers are fey creatures that are technologically curios but they are rarely malicious. This isn’t the case for Izear, as he is hopelessly addicted to the drug dreamshiver.

(NOTE: When us nerds playtested this encounter, it came off as a little easy for the PCs. Feel free to beef up Izear and make a note that’s he is immune to fire, which will mitigate laser damage.)

DMs should play Izear as aggressive and erratic. Hespers are shameless flirts who often keep mortal lovers as attendants. They reproduce by initiating a grotesque exowomb on their attendant, which grows for 2 weeks until it bursts and spills out a small but fully mature hesper. Hespers prefer willing attendants and Izear is fully agitated because Legs Thunderdome has grown increasingly detached.

A simply check allows PCs to spot that Legs can be reasoned with. DMs should allow any good faith effort to align Legs against Ike, although she prefers to be a non-combatant and simply moves as far away as the action as she is able in the small space. Should the PCs attack her directly, her stat block is below.

In order to make the combat more interesting, Ike should use his Reactor Sprite ability when he drops below half hit points. His opening surprise attack should be his energy ray, with most subsequent attacks being his mutating touch ability (again, available via the SRD). 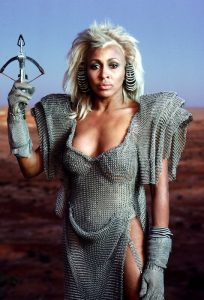 The encounter awards 1,000 XP, in addition to the above gear that PCs can loot (and potentially convert to UPBs). This is meant to be a quick one-shot, but should Legs Thunderdome want to join your crew, why not? And if PCs want to spend a week on repairs in order to lift the Coober Pedy out of the bog like Boba on Dagabah, why not?

It is absolutely worth picking up the Starfinder Dead Suns AP and the Alien Archive, if just to let your imagination soar with the new monsters and settings. And consider designing unique encounters around some real life history. Sometimes the truth is stranger than fiction.

Nerds on Earth released another encounter set on Castroval. In fact, we have a whole series of these mash-up encounters called “Fantastic Fights.” Click here to browse through them all.