Prepare to embark on a journey where survival is necessary, but isn’t wholly the name of the game.  You’ll have to balance coming out alive with completing your mission:  Capturing as many specimens (Threats) as possible.  Supplies are limited and you’re no superhero; you’re just a scientist.  Do you have what it takes to survive Outpost Amazon?

Outpost Amazon is a card game in which players will have to strategically manage Items in their Supply and health (HP) as the navigate the jungle on the way to rescue.  But en route to salvation they’ll suffer trials, tribulations, and Threats – all of which threaten to kill the Characters and jeopardize the mission.

The game comes in a tin as opposed to a cardboard box, and inside you’ll find: 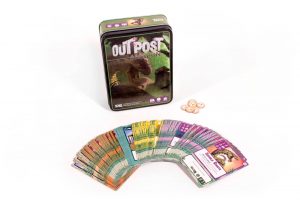 Along with the rulebook, of course.

Everything is pretty and simple.  IDW found a great balance with both, as Outpost Amazon isn’t a CCG (collectible card game), which would call for a higher quality in both departments.  Its meant to be played and enjoyed apart from protective sleeves and PSA gradings.

The setup is super simple, and so too is the gameplay itself.  On each of your turns, you’ll:

Your goal is twofold:

1.  Survive!  This isn’t as easy as it sounds.  Most of the Characters only have 4 HP (and a couple have less than that!) and you lose if even one party member goes down before the Expedition Deck is exhausted.  With revealed Threats guaranteeing hits to HP and Good and Bad Events threatening the same if you’re found without Food or Water, you’ll find that a solid chunk of the game is spent with one or more of your Characters at near death.  That adds a lot of great tension and difficulty to the game.  There are 4 possible First Aid Kits in the deck which will bring one Character back to full health when played from the Supply, so manage them wisely!  I say “possible” because the way the game is set up might reduce that number all the way to 0 if you’re super unlucky! 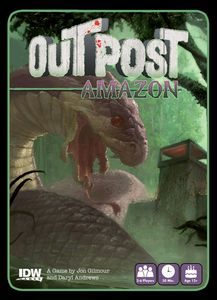 To top this off, Water and Food are in fairly short supply in your Outpost Deck when you begin the game.  7 of the 11 Water cards are attached to Threats and 9 of 13 Food cards are also attached to Threats.  I mean, sure:  You can kill those Threats which will move them into the Discard pile to later be shuffled into your Outpost Deck; enabling you to draw that precious Food and Water…but that will interfere with the second goal!

2.  Gotta Catch ‘Em All.  You score points in Outpost Amazon by tallying the total HP of the Threats you managed to Net and Cage during your expedition.  To do so, you have to reduce the Threat to its Net Value (displayed on the card; usually half of its HP), discard a Net item card from your Supply, and squeeze that creature into a Cage (also in your Supply) that can hold it.  Each Cage has a capacity of x HP, where x is some number between 10 and 21.  So two 5s could fit into the 10, but you couldn’t then squeeze a 2 in that Cage.  Its gotta go elsewhere.

A perfect game is a score of 90 (the total HP of all 18 Threat cards in the game), but to do that you’ve gotta do without their Water and Food!  Plus, a few of them have some nasty effects while in play.

Oh, and you can’t have more than 5 Threats in play at the end of any Character’s turn or you’re overwhelmed and lose.  So sometimes you’ve gotta straight up kill a beastie for fear of drawing Threat #5 on the next visit to the Expedition Deck.

For a game of just north of 50 cards, Outpost Amazon delivers a surprising amount of challenge.  It plays quickly, requires a pleasant but not overwhelming amount of strategizing, and has an adjustable and challenging difficulty level.

We dug the Caging element to the gameplay.  You could murder all of the Threats and survive easily enough, but that doesn’t mean you win thanks to the scoring system.  That’ll keep us circling back to it every now and again as a breather between longer, more involved games or as a quickie when all we’ve got is half an hour to burn before moving on to the next thing.

You can snag yourself a copy of Outpost Amazon from IDW Games here!

[Disclaimer:  Nerds on Earth was provided a copy of Outpost Amazon by IDW Games for review purposes.]

Splat Attack From IDW Games Looks Like Every 90s Kid’s…