Indiana Jones famously hated snakes. But no one hates snakes more than my dad. Luckily, my dad has never ran across a Naga, or he’d absolutely flip his lid. Naga is sanskrit for snake, so let’s dig into Naga lore a bit more deeply, exploring the origins of the Naga, a staple of many of our favorite RPGs.

Naga in Legend and Religion

Since we’ve already mentioned sanskrit, a sacred language to Hinduism, let’s put a pin in ancient India, as we’ll come back to that. But the lore of the Naga takes us both further back in history, and also much wider across the world.

History tells us that as long as there have been people like my dad who are afraid of snakes, there have also been people who deified them. Indeed, in ancient times there were many cultures who had a serpent as their totem, many of which are known to have worn hoods on their heads to represent cobras. This was prevalent in Babylonian, Kemetic (Egyptian), Sumerian, and Assyrian cultures in ancient times, evidenced in part by ancient hymns describing serpents in the genealogical table of Assyrian kings.

Personified serpent gods were widespread geographically as well. Naga lore was very common in the Buddhist countries of Asia. Buddhist Naga typically had the form of a great cobra, but at times would often take on a vaguely dragon concept.

In many of these tales, Naga were known to dwell deep in lakes or in underground streams, always guarding treasure. 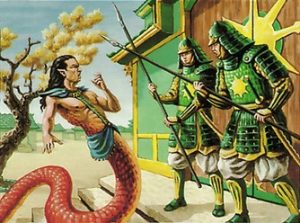 Naga legends also figure in Thai folklore and are routinely depicted in architectural elements. In Cambodian legends, Naga are a reptilian race of beings who once ruled a large kingdom in the Pacific Ocean region until they were chased away and sought refuge in India. Seven-headed Nagas are depicted as statues on Cambodian temples such as Angkor Wat, represented with numerological symbolism in the number of their heads.

Most prominently, however, was when the Sumerian and Assyrians migrated east and the tradition of Naga worship slithered up the Indus River with them. That brings us to India where the Naga are seen as ancient rulers and where the modern appearance of Naga as large snake-like creatures with humanoid heads was codified. In fact, Krishna–in addition to his being an incarnation of Vishnu–was also the great grandson of a Naga chief and always thought to be under the protection of the cobra.

The Naga’s Introduction to and Evolution in Tabletop RPGs

Yeah, yeah, we get it: Naga lore has deep roots in Middle Eastern and Southeast Asian legend, but how does this help me bring them to my RPG campaign? 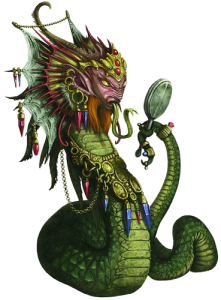 Well, like most RPG lore, early presentation can be traced to the 70s and D&D. These first roleplaying representations were remarkable faithful to their historical roots. Like Buddhist Naga, early D&D water naga dwelled on the water’s edge, D&D guardian naga stood vigil over treasure just as they would in Southeast Asia folklore, and spirit naga had a spelcasting ability that harkened to the religious and spirit roots of naga. Of course, all flavors stuck to their historical roots of being hell bent on biting other creatures.

By D&D 3.5 a worm naga had made an appearance in Dungeon Magazine issue #130 and this served as a perfect transition for Paizo to give naga a more “wormy” reputation, derogatorily calling naga “wormfolk,” and mostly clustering them in Nagajor, the Tian Xia region of Golarion, the setting of the Pathfinder RPG.

Just like in ancient history, naga are pretty much everywhere. They make an appearance in the D&D 5th edition Monster Manual. Water naga are prominent in World of Warcraft, the Called Shot Podcast makes them pirates, Chris A. Jackson highlights them in his Pathfinder Tales novels, and Kobold Press has added to the lore of the nagaji, whom it is said were created by true naga to act as a servitor race.

And if you want to bring a naga to the table, the nagaji are a playable race found in Pathfinder’s Advanced Race Guide. There is just no chance you’ll find my dad playing one. 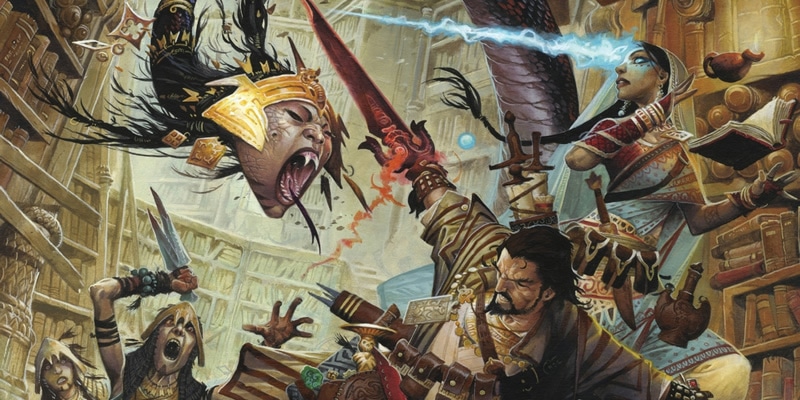 [Note: This naga lore post first appeared at Tribality.com as a guest post. Tribality has a ton of tabletop RPG articles for you to puruse.]