Dark.net from Wizkids is an interesting cyberpunk-themed game revolving around the purchase and sale of information from four Fences (the people who actually stole the information from the ominously named Big Four).  You’re a nobody, but as you grow your network and make contacts your Reputation might just fix that.

Reputation is the aim; it is Dark.net’s Victory Points equivalent.  Can you make a large enough name for yourself to put your competition to shame?

People who love to punch out cardboard components: Rejoice!  Dark.net comes absolutely loaded with them, from the tiny credit markers all the way to the larger Player Aides, you’re looking at well north of 100 cardboard bits.  The good news, though, is that they are remarkably sturdy!

You’ll also have 128 wooden components (100 Information cubes, 16 Informants, and 12 Network Boosters) along with a small deck of cards and 7 dice. 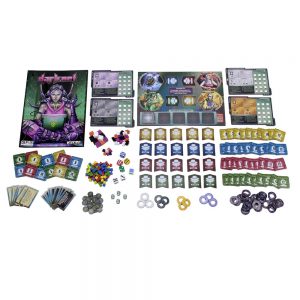 More good news here:  You’re given plenty of baggies to store all those bits and pieces in.  Always a plus.

Most of the art plays up the “cyber” part of cyberpunk.  The vast majority of the cardboard elements are adorned with circuity-looking lines or data streams – and appropriately so.  The Network Extensions function as circuits in the game, while the other bits represent other technological doohickeys like Viruses and Traces.

The Player Aides are easy to read and make scoring Reputation at the end a breeze.  They also allow for a nifty way to track Credits in a bank using cubes stationed in the appropriate ones and tens positions.

Our only complaints as far as the components go were minor.  The biggest place for improvement here was the size of the City Board on which the game is played.  It got cramped quickly as cubes, cards, Trace tokens, Contacts, Network Extensions, and dice all vied for space.  As components were picked up or put down, there was a fair amount of jostling among them that could have been lessened with a larger board, for sure.

Gameplay is broken down into three phases:

Transmission Phase.  You roll 2d6 and add those numbers together to determine if you’re going to intercept some information (earn yourself some cubes) or suffer a Corporate Attack (which threatens to destroy pieces of your Network).  A sum of 7 signals the latter which also functions as a mechanic that moves the game towards its end by adding a Trace to every Fence (more on that below).  If the sum (any but 7) matches the number on one of your Network Extensions, you earn yourself some information cubes.  Adding Network Boosters and Informants increases the number of cubes you can earn during this phase.

Action Phase.  This is when the wheelin’ and dealin’ is done.  Buy or sell info, expand or enhance your network, make Contacts (these guys are crucial as they are worth good Reputation and can be used to repair Network Extensions damaged during Corporate Attacks and neutralize viruses), or sabotage a competitor’s Network by instilling a Virus.  You can only choose two and they must be different (unless you opt to collect one credit, which you can do twice), so be smart!

Trace Phase.  Players will earn Retaliation Dice as they buy or sell information, Contacts, or Network Extensions.  These dice are rolled in this final phase and if the pips total less than the number of Traces on that color’s Fence, that Fence loses information cubes (making it more profitable to sell to them, but increasingly difficult to buy from them as they may have none to buy!) and gets a Response Card that alters the way you can interact with that Fence.  Once those 16 Response Cards are exhausted, its time to count up your Reputation as the game is over!

Once you get a round or two under your belt, gameplay will actually move fairly quickly.  The mechanics are not terribly complex – a truth somewhat blurred by the sheer number of components required for play.

The ability to tamper with the growing Networks of the other players is a fun element; particularly because paying to install a Virus on their Network not only robs them of information cubes, but also grants you some each time the number of the infected Network Extension pops up during the Transmission Phase!

The means of earning Reputation are varied enough that winning strategies are numerous.  It didn’t feel like there was one right way to win.  I spent absolutely zero time fiddling with Network Boosters, Informants, or Viruses.  Instead I rounded up several Contacts and had a large Network.  I was 1 Reputation off from winning; beaten by a friend who dabbled in the very things I didn’t.  I liked that a lot. 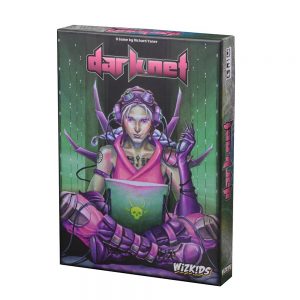 The game is also designed in such a way that you don’t feel compelled to hoard information cubes.  They are worth zero Reputation in the end, so go right ahead and spend them to acquire the things that do!

The economics of the game are dynamic in a really interesting way, too.  Information cubes vary in their purchase price and sale price based on the supply showing on the Fence.  What you might be able to snag for 1 Credit a piece, the next guy may have to pay 4 Credits for.  However, you might also set your opponent’s up to make a killing selling cubes to that fence for 4 Credits a piece!

Overall, we enjoyed Dark.net.  While it might not make an appearance at every game night we host, it won’t collect dust either.  The neat cyberpunk theme coupled with a respectable strategic variety gives the game a fairly high replay value, so grab a friend or three and get into the information acquisition and sales business to find out if your Reputation is greater than your opposition’s!  You can snag a copy from Amazon here.

[Disclaimer:  Nerds on Earth was provided a copy of Dark.net by Wizkids for review purposes.]

Take Care of the Wigglers: A Starfinder Adventure Idea Inspired by Earthworms and The Expendables

The Evolution of Fury of Dracula: From 1st Edition to 4th…