Take Care of the Wigglers: A Starfinder Adventure Idea Inspired by Earthworms and The Expendables

If you ask Wieger Wamelink, any successful Mars mission will need a heck of a lot of worms. So while Elon Musk has plans for colonizing Mars by 2024, he’ll need to leave room in the glove compartment of his Tesla for some of the little wigglers.

Wamelink is an ecologist that studies why particular plant species will grow easily in one place, and not at all in another. The last few years has him researching an answer to a single question: Could some plant species grow on dirt from Mars? And although he could ask Matt Damon, Wamelink is dedicated to the real science of it.

Wamelink filled a greenhouse with three sets of pots: some with lunar dirt, some with Martian dirt, andsome with coarse, nutrient-poor Earth dirt. Working with ten crops—radishes, chives, and arugula—he enriched the soils with dead plant parts, mimicking what might happen in a successful Martian garden scenario. In the Mars soil, “all the plants did well except the spinach.” 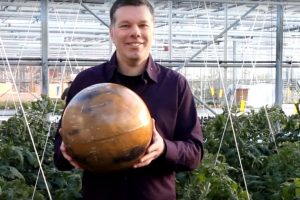 While the results have been promising, soil alone can only do so much. A sustainable Martian farming ecosystem would also need to involve fungi, bacteria, and pollinators such as bees and butterflies. (Incidentally, Wamelink is betting on bumblebees: “you can keep them in hibernation,” he says, so they’d easily survive the rocket trip.)

But the most important ecosystem member? Earthworms. So Wamelink is replicating harsh Martian dirt in a terrarium on his desk. He has dropped in several types of earthworms to test if Earth’s little wigglers are able to hack it.

You can follow the experiment’s progress on the lab’s Facebook page. Wamelink has a sneak peek for the curious though: “They are still alive,” he says. “They really seem to like it. They seem to be very happy.”

Below is a short Starfinder adventure inspired by the above story. (It assumes you have access to the Starfinder Core Rulebook and the Alien Archive.)

A witchwyrd merchant, Lowink, has hired the PCs to serve as general research assistants aboard his Tetrad Caravel (Alien Archive pg 123) that is bound for Kasath, the ruined planet of the kasatha. Lowink is bankrolling Wieger Wamelink, a brilliant scientist that has had a scientific breakthrough that promises to reinvigorate the dead ecosystems of Kasath, turning it back into a planet that teems with life.

But while the PCs are aboard to perform odd jobs on the ship, Lowink sees them as not much more than roadies, so he has also contracted with a well-known and well-honed group of mercenaries. These particular mercenaries were chosen both for their unquestioned competence but also because they have a long history with Lowink, having performed many missions on Kasath at his behest.

Below is a list of the mercenaries, all of which were slavishly inspired by The Expendables (Note: click their names for a downloadable PDF character sheet of them created by Herolab Online):

At the opening of the adventure the PCs will have an opportunity to interact with the mercenaries as well as Wamelink. The interactions should be enjoyable and the mission should seem above board and hopeful, as the NPCs are genuinely eager to make a difference on Kasath.

The notable exception is Stone Payne, who gives off a slightly different vibe from the rest of the crew. Yet this is simply chalked up to the inherent shiftiness of Stone’s role as an operative. Indeed, anything less than a DC 25 Sense Motive check leaves the PCs to brush off any warning flags they see with Stone.

This adventure is not meant to be comprehensive. 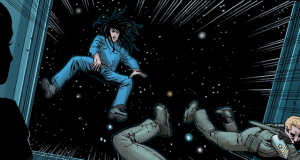 Instead, it is meant to merely offer several hooks for further adventure. After the PCs have had a few minutes to interact with the NPCs, their duties take them to the science lab. Have each of them roll a Perception check. Read the following as a cinematic, having the PC who rolled the highest be serendipitously looking through the open bulkhead, able to fully see the events take place.

As the rest of the crew are joyously congratulating Wamelink on his work, Stone and Tool have discretely placed a datajack into the ship’s main computer. Stone then pulls what looks like a datachip from the computer and casts a glance toward Tool.

Both the operative and the goblin inconspicuously hook a tether to a study anchor on the bulkhead. As he secures the anchor with the left hand, Stone pulls his sidearm with his right hand. In a quick, smooth motion, Stone fires twice into the back of the unsuspecting Wamelink’s head. Almost as soon as the second shot is fired, Tool opens the outer bulkhead, opening the ship’s cargo hold to the cold of space.

Only Bale Caesar’s face was turned to you, but you see his eyes widen in disbelief just a split second before he and his colleagues are ripped into space.

Have each of the PCs roll a reflex save. The PC who rolled the highest was able to reflexively close the blast door of the science lab as soon as she felt the air begin to be sucked from the ship. Now have the PCs roll a perception check. The highest rolling PC is able to make out the voice of Stone speaking to Tool.

“No witnesses. Then pilot the ship to the rendezvous point. I’ll deliver the data.”

Just a few seconds later the PCs hear the sound associated with the single-pilot craft thrusting away from the larger Tetrad Caravel. Then the door to the science lab slides open, revealing Tool with his junk laser drawn. Roll initiative.

Use the stat block on page 54 of the Alien Archive for Tool, a Space Goblin Honchohead. Make it a challenging encounter, but it is assumed the PCs prevail. Again, the purpose of this small adventure is to dangle potential story threads in front of a group of new players. Below our some potential hooks generated from the adventure:

This adventure takes a dash of real life science and uses some easily re-skimmed NPCs that can be played with a comedic effect. I’m in.

The full encounter awards 800 XP, in addition to generating the above story hooks.

It is absolutely worth reading picking up the Starfinder AP and the Alien Archive, if just to let your imagination soar with the new monsters and settings. And consider designing unique encounters around some real life science. Sometimes the truth is stranger than fiction.

Pathfinder Book Round Up: Core and Supplemental Reviews