The Tome of Beasts and the Importance of Third Party Publishing

The American economy is a wondrous thing. We’re a nation of immigrants, entrepreneurs, and creators, all with a can-do spirit around the idea that if we dream something up, there is a way to somehow make that dream a reality.

If someone makes a widget in red, you can bet that someone will pursue the American Dream and we’ll soon see a version of that same widget in blue. Nerds everywhere have benefited from this creative economic spirit. 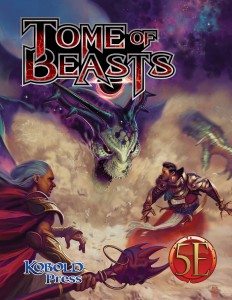 If you’ve been in a game store lately, you’ve undoubtedly seen trinkets and products that you never could have imagined before, but are thrilled to discover they exist. And the larger gaming companies are recognizing that this creativity among nerd hobbies is good for business. A robust catalogue of products raises the water level for all, as us nerds have more entry points to stay engaged in the hobbies we love.

Perhaps the key example of this is the Open Gaming License (OGL) issued by Wizards of the Coast (WotC) for Dungeons and Dragons (D&D). The OGL essentially says that smaller publishers can make companion products for D&D, provided they do so in good faith in regards to D&D’s intellectual property.

Many nerds know the story of Pathfinder, the tabletop RPG inspired by the 3.5 edition of D&D. Using the OGL, Paizo (the company behind Pathfinder) has become an unbelievable success story, publishing one great book after another.

But did you know that there are similarly great RPG publishers that are using the OGL to publish great products for the current 5th edition of D&D? Us nerds have an embarrassment of riches nowadays.

Tome of Beasts by Kobold Press

The clever entrepreneurial kobolds at Kobold Press recognized that D&D was currently only making monster widgets in red, so they saw an opportunity to make monster widgets in blue. The result was the Tome of Beasts, a challenge-rating 20 behemoth of a book that brings over 400 new monsters to D&D 5e.

The Tome of Beasts is a 3rd-party product for D&D 5e, but the production values don’t suffer one bit. It’s a beautiful book. But don’t let the cover fool you; it’s full of evil.

The evil is the 400 monsters included therein. There are demons and fey. There are new NPCs to battle and little level one critters to kick around. With over 400 new monsters, you can rest assured that it runs the gambit, both in type of monster and in the challenge of the monsters.

Let’s meet 1% of the creatures included in the Tome of Beasts.

Moss Lurker. My favorite gaming is in the lower to mid-levels and I have a liking for “earthy” monsters that seem to blend right into their environments. So I loved the Moss lurker.

Described as a cruel crossbreed between a troll and a gnome, the Moss Lurker looks like something that crawled right out of an Aesop Fable and forgot to comb his hair.

It’s a challenge 1 monster, but one that would be fun to throw at a brand new adventuring party. 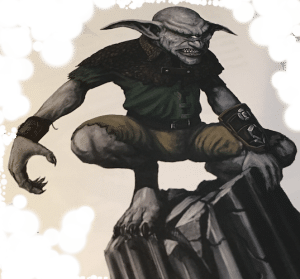 Likho. A creature that look like the spawn of a goblin and a cyclops, the Likho would be a little tougher challenge for adventurers.

Described as ferocious and evil, the Likho taunts and insults its opponents, so you wonder if it spends time on Internet message boards.

Also, the Likho eats organs, which is nice. 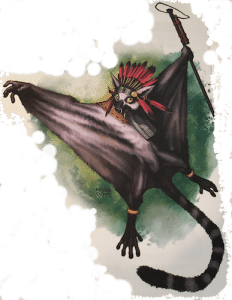 Lemurfolk (Kaguani). OK, this is a favorite of my daughter, but I have to admit that I’m a little fond of it myself, even it isn’t nearly as beastly as the other 400+ monsters in the book.

A Kaguani glides through the forest canopy at night, wielding a blowgun. 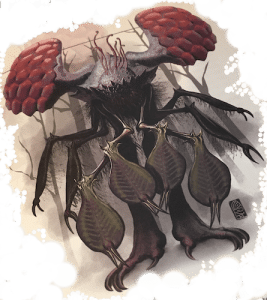 Mi-Go. A favorite of Wolfgang Baur–the chief Kobold at Kobold Press–the Mi-Go certainly looks the part of a beast.

Described as “vaguely insectlike” the Mi-Go is certainly alien looking. At a challenge rating of 5, most PCs wouldn’t want a close encounter with one.

My hastily cropped photos don’t nearly do the Tome of Beasts justice. The artwork and creature designs are excellent throughout.

RPG sales have grown 40% in 2016 as more and more folks are flocking to D&D and other analog gaming hobbies. Great 3rd party publishers like Kobold Press are a part of this. They are making great products which give fans more great content for their games. The Tome of Beasts is proof of this.

You can get the Tome of Beasts from Amazon, but look for related products straight from the Kobold Store or in your friendly local gaming store.

7 Things I Loved About Stranger Things