The summer before my senior year of high school I was a camp counselor for a group of 8-year-old boys. To close our week, we’d take the boys to sleep overnight in teepees.

It was perfect for telling scary stories around the campfire.

I’ll never forget one of those nights. Most boys would get a fright, scream, then begin to laugh nervously as they realized I was pulling their leg. But the look on one kid’s face has been seared into my memory ever since. He was genuinely scared to death.

As everyone else laughed nervously, I saw that little guy trembling. I knew in that moment that I was an a@@hole. What was a goofy story for a 17-year-old was a legitimately frightening moment for an 8-year-old. I had scarred him.

I still genuinely feel bad for scaring that kid so badly and I think I shared this story in large part because I needed to get that off my chest, admitting what a thoughtless jerk I can be at times.

Of course I also shared that story because I wanted to set up this review of pathfinder Horror Adventures!

Review of Pathfinder Horror Adventures: Bringing Fright to Your RPGs 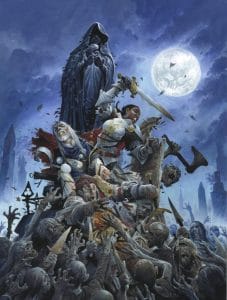 Horror Adventures is a book to remind us that there are fates worse than death for your PCs. A PC who nobly sacrifices her life in battle is no big deal when compared to evil possession or loss of sanity. In fact, the opening chapter of Horror Adventures gives both advice and options for running your Pathfinder RPG with a horror flavor.

One should not just drop an insane or ghoulish PC into a campaign, and the book opens with 2 of the 254 pages of the Horror Adventures hardcover judiciously setting the stage. Then the book dials up the creepiness by exploring several types of corruptions that can inflict a player.

Whereas the typical lycanthropy and vampirism make an appearance of course, I liked the Promethean corruption best, which has PCs gradually replacing their decaying body with more and more artificial components. Botox was not one of the exotic materials the Pathfinder designers included to prolong life, but it was the book’s only oversight.

Chapter 2 jumps right into how horror rules open up new class archetypes. These new archetypes allow PCs to get creepier and creepier every time they gain a level, and there is just too much good in this chapter to be able to share it all. I’ll share 5 of my favorites and we’ll have to call it good:

There are so many more, but I need to stop there before this simple review of Horror Adventures turns into something the length of the Necronomicon. The bottom line is that the Pathfinder crew really put together a wide variety of horror-themed takes on the character classes. An adventuring party from just this book would make for a great campaign.

Chapter 3 are horror flavored feats, while Chapter 4 adds new spells and rituals. These chapters are well done, adding well-worn horror tropes (like Blood Spurt), practical spells (such as Sense Madness), as well as creative takes on the horror genre (like Death Clutch). There is a lot here that can immediately be brought to the table.

Chapter 5 is Horror Rules and I found everything to be straight-forward and clear. Whether you are dealing with haunts or creepy environments, this chapter should make gameplay run smoothly.

I will say that there are 11 other hardcovers referenced and sourced throughout this book, and 6 in Chapter 5 alone. Horror Adventures in no way stands alone. Pathfinder is 10 years old at this point, so it’s not an easy on ramp for new players. Pathfinder is a deep cut; maybe not to the depths of the Great Old Ones, but still deep. Horror Adventures is a reference book that references many other Pathfinder books, so just know what you are getting yourself into. 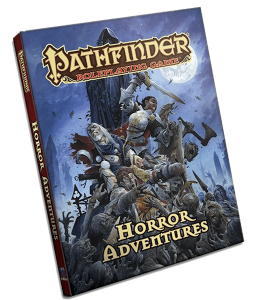 Chapter 6 is my favorite chapter. Pathfinder easily could have lumped horror into one big witch’s cauldron, but they took care to go through a the different sub-genres of horror, acknowledging that not all horror stories are alike. The chapter is both well detailed and well nuanced, and provides tons of helpful tips and thoughts for DMs.

Chapter 7 lists new horror gear and magic items, with a heavy emphasis on torture implements of course. I’m creeped out by scrimshaws and bloodletters, so I had a good time flipping through the illustrations and item descriptions.

Since I mentioned illustrations, let’s say a word about the art and layout of Horror Adventures. As usual, Paizo does not disappoint. Regular cover artist Wayne Reynolds is on point, and the interior team produces a zombie horde worth of beautifully gruesome images. It’s a fine book.

Speaking of images, the Bestiary (Chapter 8) is not as robust as one would expect for a horror adventure book. This is due I’m sure to the fact that Pathfinder has released 5 Bestiary volumes, plus pack monsters into every Adventure Path volume they sell. The monsters are already out in the wild; Horror Adventures gives you new rules and archetypes to take better advantage of the beasts already represented in Pathfinder.

Horror Adventures is well-indexed and well-written. It’s packed with beautifully creepy images and creative ideas for running horror campaigns. It’s an easy, ethusiastic recommendation for purchase, as I fully suspect you’ll enjoy it as much as I did. You can get it for a really good price here.

Finally, a word for little teepee kid that I scared to death: I’m so sorry, little dude. I hope that you are able to appreciate a good scary story now that you are all grown up.

[Disclosure: Paizo provided Nerds on Earth with a complementary copy of Horror Adventures for review.]

7 Interesting Comic Characters You Should Know

Neo: Just How Fast Can The One Fly?

Review of Pathfinder Horror Adventures: Bringing a Fright to…