Neo: Just How Fast Can The One Fly?

Just over a year ago I read James Kakalios’ The Physics of Superheroes in which Kakalios, a physicist by trade, applies math and science to a number of our favorite heroes and heroines to determine just how realistic or probable their abilities might prove in real life.

The answers were pretty surprising (in fact, you should read my review here to learn of a super power you might actually have!), but whether the powers were debunked or given a little plausibility, it was plain ole nerdy fun to put them to real world tests.

Most of the time we’re totally content (and should be) with a pretty extensive suspension of disbelief when it comes to our favorite movies, TV shows, and comics.  But, gosh, I just can’t help but do the math when they give me all I need to solve for X – allowing me to draw parallels between what is going on in these fictional worlds and what is quantifiable in our own.

My therapist and I are still working on a solution to this compulsion.

How Fast Can Neo Fly In The Matrix: Reloaded?

After the sweet fight in the chateau with the snooty wino’s henchman, Neo bursts through a door in pursuit of the ghost twins and finds himself not in the parking garage he saw on its other side just two seconds prior, but in the mountains.

He phones Link to ask what’s going on, and Link explains that Trinity and Morpheus are still being hotly pursued by the twins in a city 500 miles away.  Neo takes flight… 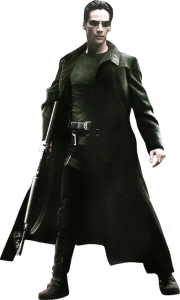 I wanted to know how fast Neo could fly!

I remembered a simple formula for calculating distance:

I had the distance (500 miles) and the time (14 minutes, 18 seconds from the time Neo’s feet leave the ground in the mountains to the moment he snatches Morpheus and the Key Maker from above the colliding semi trucks).  To determine his speed (r), all I had to do was some simple division.

Since I was looking for a speed in miles per hour (mph), I needed to make sure my time was represented in hours.  Two quick calculations to get there:

2,097.93 miles per hour is still sorta intangible to most folks, though.  You’ve probably never gone anywhere near that fast, so you can’t exactly grasp how fast that is.  Let me make a few comparisons for you: 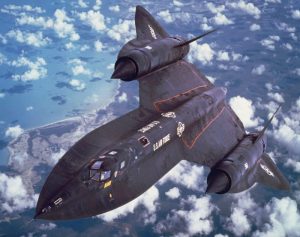 The M4 carbine is the current standard issue rifle for the US Army.  It has a muzzle velocity of 880 meters per second, which equates to about 1,968 miles per hour.  Now muzzle velocity is going to be a measure of the bullet’s maximum velocity, as it comes up against other forces which act upon it and therefore slow it down upon exiting the barrel.

So he’s faster than a speeding bullet!  Although I’m 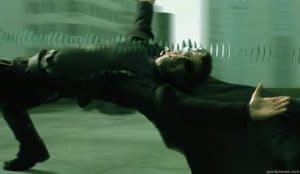 not so sure that this means he can dodge bullets  (even those fired from pistols whose bullets have significantly lower muzzle velocities).  Does his flight speed translate directly into muscle speed?  Could he then run at 2,097.93mph?  Or slap you at that speed?  There does seem to be some cinematic evidence in the trilogy that might suggest as much, but none so definitive that I’m willing to make a statement.

Neo And The Fujita Scale

The Fujita Scale is used to classify tornados.  An F3 tornado (93%+ of recorded tornados classify beneath this at F0-F2) generates wind speeds of 254-332 miles per hour.  At these speeds, “heavy cars are lifted off the ground and thrown.”

With Neo clocking in at over 6x the maximum wind speed of an F3, it may come as no surprise that cars would be sucked up in his wake when he later flies off to save Trinity from a fateful fall (even if you think the cars are being blown forward by the explosion behind him) in the very same movie.

And This Is His Minimum Speed

“Bullet time” occurs more than once during the 14 minutes and 18 seconds that elapse between Neo’s departure and arrival, so if we were adhering to the passage of actual time (as opposed to exaggerated time) the variable (t) could actually be even smaller (albeit probably not significantly so) which would make his speed (r) even greater.

Of course, all of this is built on the assumption that real time (what my stopwatch recorded) corresponds directly (1:1) with movie time.

But I’m a huge Dragonball Z fan and so I’ve been conditioned to mistrust that ratio since Frieza once said Namek would blow up in 5 minutes’ time and it took nine episodes to do so.