Editor’s Note: Some light spoilers lie ahead!  The good news is that Stranger Things weighs in at only eight episodes, so you can knock them out quick and enjoy this chat afterwards.  Happy viewing!

Jason In a world full of great nerd-y offerings, and subsequent coverage of all things nerd, it is very rare for something to come storming onto the scene and capture everyone’s attention. And yet, the recent Netflix series Stranger Things came seemingly from nowhere to capture the attention of nerds everywhere. So, how did you find Stranger Things and what was your first impression of it?

Joseph I actually saw the preview that auto-played on the Netflix Roku app. Something about it just grabbed my attention and said, “This is something you’ll like!”

I think it was the dark-ish tone visually, contrasted with the wide-eyed innocence of the kids.

Jason I stumbled into the show about a week before it dropped when it ran as a preview at the local theater. And, like you, something about it just struck me as being something I would like. And, as it turns out, most of the nerd world.

Joseph Truth be told, I don’t remember a ton about that auto-preview, but it was enough to make it stick in my head.

Jason One of the things that I think shows up in both of our experiences is that the show has a certain visual style, that it stands out and grabs your attention. Something about it is very 1980s but, also, clearly made on better cameras and equipment.

Joseph Yes! Perhaps I’m jumping ahead of the conversation here, but one of the things I thought was perfect about the show was how perfectly everything fit – settings, costume, dialog, music. All of it.

Morgan For me, I just kept hearing the title Stranger Things and had no idea what it was about other than it was an 80s dream. I finally just gave it a shot late at night and ended up binging til 5am.

Jason It most certainly is binge-worthy. I plowed through the whole series in less than a day as well.

One of the things that I think makes the show unique is that it tells its story in, for television, an abnormal amount of episodes. What did you all think about the pacing of the show and its overall length?

Morgan I think the length of the show was a perfect amount. I love when writers plan out a show perfectly.

No unnecessary filler content. No awkward transitions, no stalling. All very consistent and I think that’s why it was so easy to binge.

Joseph I agree. Netflix’s usual 13 episodes would have felt like too much for Stranger Things.

Jason I completely agree. You all are both too young to remember it but there was a time when networks would run 6 hour mini-series. Even in its length, it feels very nostalgic for a certain time period. I hope that the success they are having with this show means Netflix will give creators freedom in the future to tell their whole story in whatever number of episodes it takes!

Morgan Well a sequel for season 2 has been confirmed! So I have high hopes.

Joseph A sequel has been confirmed?!?!

Morgan YES! And we’ll have to have a talk about what we think will take place in season 2 later because I got some theories!

Jason A sequel, yes, but they are being very careful about what they say. I suspect it may become an anthology-like show, similar to American Horror Story, where every season tells a much different story. But I could be wrong!

So, let’s talk about 2 things that I think make the show so great: the cast and three intertwined stories. First up, what did you think of the cast and who is your favorite? 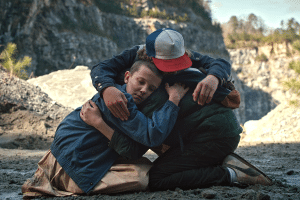 Jason Dustin is my favorite. On so many levels, I just felt like I was watching my middle school self.
First, he is the uber-science nerd of the group. (The scene where he shames his science teacher into telling him how to make a sensory depravation tank is amazing.) Second, he becomes the center of the group in some ways, pushing people to reconcile and be friends. I loved that. Good friendship clusters need that person. Last, he was real. My favorite scene? The awkward hug at the quarry. It just felt so perfect.

Morgan I love that scene so much!

Jason But I think the best acting job was most definitely done by 11. She will be in movies for a long time to come if she chooses to.

Morgan She is British, so cute and small, and can sing! She is such a talented actor. 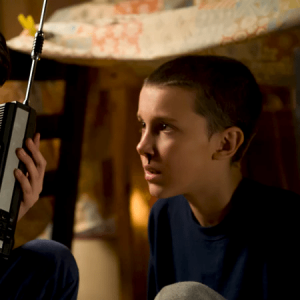 Joseph I thought all the kids were great, and each brought their own thing to the table. Dustin’s scenes later in the series were amazing. But I loved how they all sort of combined to create a “Stand By Me” kind of vibe.

Jason The adults are also stellar in their roles. David Harbor is a solid actor and it is great to see him have this level of success as the sheriff. His character arc helps the story so much, as he goes from skeptic to full-on believer to hero.

Joseph Agreed. He serves as the analogue for a lot of viewers who probably started the series skeptical about whether or not they would like it.

Morgan Winona Ryder killed it and David Harbor as Hop was perfect.

Jason So, let’s talk about the three storylines. First, you have story of the kids, then the story of the teenagers, and then the adults. Each of them seems to have their own tone and carry well before the crossover. What stands out to you as you think of those pieces and how they were meshed together?

Joseph Again, I thought they were perfect. There were additional levels of complexity to each of them (i.e., the kids have one goal and one goal only, the adults have a myriad of conflicting and complimentary things to consider), but none was essentially more important than any of the others. Even though the kids were only focused on getting their friend back, the stakes were still huge.

I think it’s always a good thing to communicate to young people that they have agency and can do important things.

Jason From a storytelling standpoint, that was the hardest thing I think they had to do and they did it flawlessly. To make three very different stories and then pull them all together…that is amazing.

Morgan The kids just wanted to find Will, the teenagers just wanted to kill the monster, and the adults had the added complexity of all combined. Literally diving into the Upside Down…

Jason And speaking of the Upside Down, what comes next? If they keep the story in this world they have started, what do you think could be the direction for season 2?

Morgan I have so much to talk about. I don’t know if I could sum up my theories in this chat. All I will say is Upside Down still exists, and I think Will is still connected to it. The last episode has so much foreshadowing that if you go back and pay attention to every dialogue of the chill moments, you’ll connect some pieces. 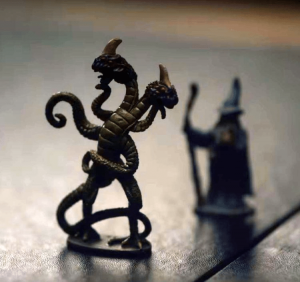 Like the introduction to the Thessala Hydra in their campaign.

Jason Yes. I do think that in those closing scenes they were doing some things to potentially frame out the next episodes: Will, Eleven still being around in some capacity both seem to play in what comes next.

Jason So, in closing make your pitch for Season 2. For me, I am going with this: Stranger Things 2: The Revenge of Barb. What do you all think?

Morgan Haha I love it. Barb deserved better! Uhmm I would say Stranger Things: 11 the Upside Down Slayer.

Joseph My guess would be Stranger Things 2: Hop is Conflicted and the Kids Save the Day From the New Monster (who may or may not be Barb)

Jason Regardless, it sounds like all of us are onboard for a new season after the strength of an amazing Stranger Things: Season 1.

The Tome of Beasts and the Importance of Third Party Publishing