Marvel Movies are the GOAT

The Marvel Cinematic Universe (MCU) is the greatest accomplishment in the history of cinema and pop culture. And that’s no exaggeration or fit of hyperbole. Really, the MCU is the GOAT.

To be clear, I’m not talking about any movie that includes Marvel characters, I’m talking about the wholly Marvel written, directed, and produced films, beginning with Iron Man in 2008 and soon to include Avengers: Infinity War. This is a claim that I’ve made before but it’s worth revisiting and I’ll sum up my argument here, as I know you won’t review the syllabus.

First, Marvel is new to the business. Iron Man dropped in 2008, meaning the franchise is just a decade old. Other movie franchises are undeniably successful, but some like Fast and Furious are 20 years old, while others like James Bond or Star Wars are over four decades old! For Marvel to release what will be 20 films in a decade is impressive.

Second, Marvel is the most financially lucrative franchise of all time. MCU movies have made 6.3 BILLION dollars in U.S. theaters (adjusted for inflation). Star Wars actually edges it out at 7.2 billion. But when you include international theatre money, Marvel’s worldwide total balloons to 14.7 BILLION to Star Wars’ 8.9. That gives the MCU a lead of over 5 billion dollars. It’s not even close at this point and Avengers: Infinity War is yet to drop this summer. (Full data here.)

Third, Marvel movie quality is shockingly consistent. Sure, Marvel cranks them out and they make money, but are the darned movies any good? After all, you are an artist; the currencies of this world mean nothing to you!

Well, out of the 18 current MCU movies, there are eight…EIGHT!…of them that have a Rotten Tomatoes score at 90 or above. That’s pretty darned good, folks. What’s crazy is that the recently released Black Panther is the MCU’s best yet at 97%. The movies are going from good to great! 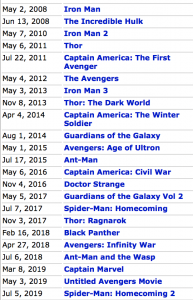 What’s more, the lowest rated Marvel movie according to RT is Thor: The Dark World at 66%. That’s not a great score, but it’s hardly a stinker as compared to many franchise movies. Besides, that 66% even feels like an outlier as most of the other non-90s films hit in the solid 70s or even high 80s. (For example, the brilliant Winter Soldier “caps” at 89%, which is criminally low.)

But do other franchises top those Rotten Tomatoes scores? Outside of a couple franchises, it’s not even close. The Harry Potter franchise actually had a higher overall aggregate score until Thor: Ragnarok and Black Panther edged Marvel higher, so it competes in terms of quality. The Star Wars franchise scores positively as well, except the Prequels pull down the overall aggregate.

By comparison, the X-Men, Batman, Spider-Man, and Transformers franchises have some real stinkers. Batman v Superman got an embarrassing 27 tomatoes, X-Men: Apocalypse came in at 48, and Transformers: Revenge of the Fallen got 19. In short, Marvel has proven they’re a 90% free throw shooter, so even if they clank one off the rim, you better bet the next nine will be nothing but net. (Full scores here.)

In summary, the MCU isn’t done yet. As I mentioned, Avengers: Infinity War is on its way. Hey, maybe it will be one of the rare mediocre Marvel movies, but its sure to increase the MCU’s financial lead, if nothing else. Plus, you know in your heart it’s going to be good.

Ant-Man and the Wasp is next. It won’t make the money of Avengers but it will continue to flesh out that small little corner of the the MCU. But is there anyone alive who doubts that Captain Marvel has the opportunity to capture the cultural conversation like Black Panther has? It will be another MCU hit.

But if we’re talking about numbers and data, let’s talk about science as well. Physics tells us that whatever goes up, must come down. That in mind, maybe Guardians of the Galaxy 3 really deepens the superhero fatigue and just doesn’t put bottoms into the theatres. But although superhero fatigue will surely bring the MCU down, *soon* is not a word I’d use. After all, their most successful movie yet is currently in theatres, and this is ten years in. Still, maybe Thanos kills them all.

If he does, it still can’t wipe away the remarkable feat that Marvel has pulled off in a decade’s time. Truly, whether you judge them by quality, through the lens of capitalism, or the best way, which is by the amount of joy they’ve brought you–the MCU really is the greatest of all time.