Maybe a sandbox can cause us to lose the plot.

Look, the headline was there to grab you. But it’s in this intro where I speak true, saying that you should run what you want to run, and play D&D the way you want to play. This is not a bad wrong fun post.

I humbly want to make a case that a few “rails” in our RPG campaigns aren’t nearly as bad as we think. Us modern nerds have set up a perfect ideal, placing it on a pedestal higher than Machu Picchu. That ideal is that “sandbox” adventures are always superior to an adventure on “rails.” Listen, I’m not saying it ain’t. I’m merely saying that the idea of no “rails” need not be such a drastic either/or.

Maybe there is room for something rail(ish) in the middle. Actually, a rail. I’ll explain.

Look at this curve. 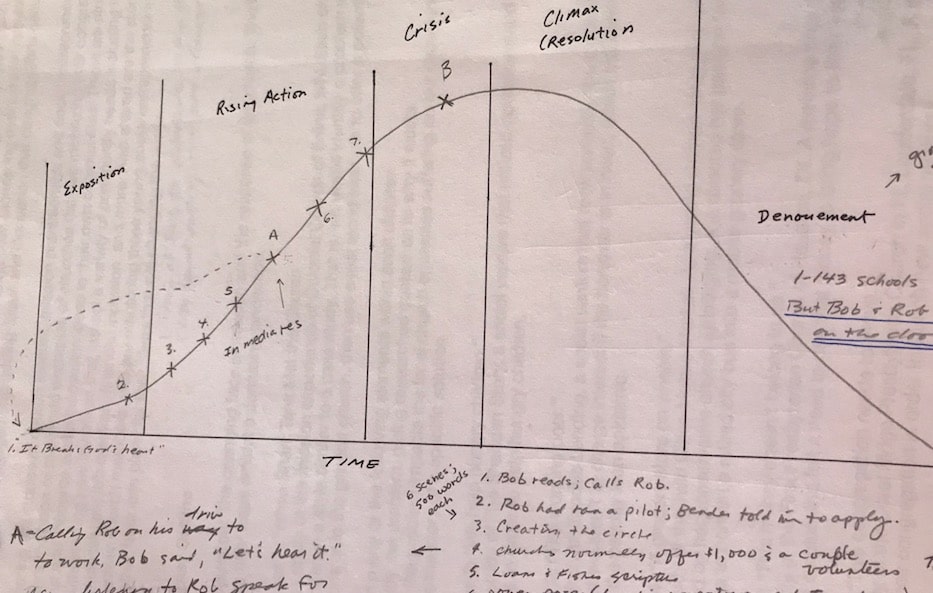 That curve is actually the “arc” of a book chapter I am writing, which I outlined by first drawing a quick curve on the back of a piece of scratch paper that looks sort of like a cresting wave.

If you look closely, you’ll see that I drew a few quick vertical lines and placed some X’s on the line.

The above is the basic story structure that has been analyzed by the likes of Joseph Campbell, Vladimir Propp, and Blake Snyder. (If you want to dig in more, the linked articles dig into aspects of it, or the books Storycraft by Jack Hart or Creating Character Arcs by KM Weiland are excellent and enjoyable reads.) Sadly, although this is basic stuff, it’s too often overlooked.

So what’s my point? Well, if you look at that little line up there you may have realized that it could be called a RAIL. So let’s zoom in and explore why hewing relatively close to that rail is actually good for your adventure.

Once you zoom in on this “rail,” you’ll see that the X’s (plot points) can veer and juke all around the rail, but they always come back.

These can be your sides quests, detours to loop in a character’s seemingly 143 pages of backstory, a dead end lead, or simply those times when the players head-scratchingly want to do something that the DM never saw coming. These kind of things are good and a strong story “rail” can support them on its broad shoulders.

Remember, this is the “Rising Action” part of the story. Quick detours keep things interesting and keep players guessing, but you can imagine that being too wide open slows that momentum, making the action not feel like it is rising. Instead, it would feel meandering. Indeed, many of the complaints I see on D&D message boards about homebrew campaigns hitting some doldrums turn out upon further questioning that there never was much of a story rail in place at the onset.

Perhaps the first OG D&D module that opened up the idea of a sandbox was Keep on the Borderlands, which in effect gave players a home base, then invited them to explore “over there.” Before Keep, D&D adventures often included a clear goal and, if not that, an implicit one: explore dungeons to take gold and get more powerful. Dungeons didn’t even necessarily make sense, but that was OK because they were there for plundering, after all.

In the decades since, the RPG community stands on the shoulders of those OG modules and now asks additional questions about motivation and story. The modern RPG community also has different expectations regarding choice.

So how to we stick to that rail without players feeling like we are railroading them?

Us modern RPG folk have set “sandbox” adventures as an ideal, which is understandable, as RPGs by design are such that we should feel like every choice is available to us. But full sandboxes can overwhelm players with choices.

Have you read the Paradox of Choice? No? OK, just read this Wikipedia page and you’ll be good. In short, our guts might tell us that there is no such thing as too many choices, but psychology says that people faced with too many options freeze up.

It’s like going to Target and you look at the shampoo aisle and there are like 12,000 options with fragrances, extracts, and Lord knows what. You stand there staring at the options, thinking, “Good gravy, can I just find that brand I always use that costs $3 bucks and smells like apples?”

A true sandbox that is willing to literally improvise any scenario at any time, or take any course that players can imagine, can actually serve to paralyze players. It’s fun for a quick divergence but, after a time, it becomes confounding because players forget the story that motivated them in the first place. They lose touch with the rail.

The best advice I’ve read on this has been Mike “Sly Flourish” Shea who suggested to give players three plus infinite choices. In other words, if a DM offered three different hooks that gently guide players back to the rail, then players will feel like they have a wealth of choices. What’s more: that “infinite” means that a DM should be willing to entertain even a hypothetical 4th choice should players really want it.

Don’t use rail as a dirty word. While the word has piled up some baggage, reminding yourself that your “rail” is simply the throughline of the campaign story takes the edge off the word.

Work on your rail. My little curve is simply my method for outlining the big arc of a story or whatever. But it works. If you spend a little time working on your rail, you can provide a story structure with engaging objectives, fun characters, and plenty of motivation that players will want to hew close to that throughline, because it’s a darned good rail.

Sink a hook. When players rightly wander, imagine some hooks that will gently nudge players back. It need not be heavy-handed and it need not be right away. But keep an eye on that rail.