By Clave Jones On Sep 28, 2017 Last updated May 7, 2018
Gary Gygax, from Empire of Imagination.
Share TwitterReddItPinterestFacebookEmailPrint

At the heart of every game of D&D is a shared story. That’s why so many Dungeon Masters–and even players–have taken a keen interest in storytelling theory and techniques.

It’s critical for DMs to have some basic competencies in story structure, those tools that help them in their task of weaving the tale. Joseph Campbell’s “Hero’s Journey” is perhaps the best known theory of story structure, but Beat Structure is right up there as well.

I would like to introduce you to another storytelling technique, this one theorized by Vladimir Propp, who analyzed thousands of Russian folk tales to determine the commonalities.

Propp described in abstract terms a set of thirty-one recurring plot devices that he found in stories and called ‘functions.’ Not all stories contained every function and they don’t necessarily happen in the same order in the stories, but Propp found that the 31 functions are a large part of how we recognize and resonate with stories.

Propp was one of the first critical trope spotters, in other words. Propp didn’t imply that the “functions” he found are universal in fiction, nor that they are an exhaustive description. Propp’s work was simply very popular and critical well-received for two related ideas:

I’ll share how Propp’s 31 functions can help you create vibrant D&D stories, but I first want to introduce you to Propp’s work of characters. Propp also concluded that all the characters in stories could be bucketed into 7 broad character functions in the fairytales he analyzed:

The Villain — an evil character that creates struggles for the hero.
The Dispatcher — any character who illustrates the need for the hero’s quest and sends the hero off.
The Helper — a typically magical entity that comes to help the hero in their quest.
The Prize (typically a princess; remember, Propp began by analyzing fairytales) — the hero deserves her throughout the story but is unable to marry her as a consequence of some evil or injustice, perhaps the work of the villain. The hero’s journey is often ended when he marries the princess, which constitutes the villain’s defeat.
The Donor — a character that prepares the hero or gives the hero some magical object, sometimes after testing them.
The Hero — the character who reacts to the dispatcher and donor characters, thwarts the villain, resolves any lacking or wronghoods, and weds the princess.
The False Hero — a figure who takes credit for the hero’s actions or tries to marry the princess.

Sound familiar? Sure, we use terms like PC, NPC, loot, and McGuffin but the idea is there. Now, let’s get to Propp’s 31 functions:

Getting better at D&D by using Propp’s 31 functions

1st Sphere: Introduction
Functions 1 to 7 introduce the situation and the main characters, setting the scene for the subsequent adventure.

7. Complicity: Unwitting helping of the enemy

2nd Sphere: The Body of the Story
The main story starts here and extends to the departure of the hero on the main quest.

8. Villainy and lack: The need is identified

3rd Sphere: The Donor Sequence
In the third set of functions, the hero goes in search of a solution, gaining the magical agent from the Donor. Note that this in itself may be a complete story.

16. Struggle: Hero and villain do battle

4th Sphere: The Hero’s Return
In the final (and often optional) phase of the storyline, the hero returns home, hopefully uneventfully and to a hero’s welcome, although this may not always be the case.

20. Return: Hero sets out for home

29. Transfiguration: Hero is given a new appearance

Propp’s work is fascinating and thorough (do click through and read Propp’s more detailed explanation of each function). It affirms much of what Joseph Campbell proposed as narrative elements common to The Hero’s Journey, what Aristotle’s articulated in narrative structure, and what many modern screen writers proclaim with Beat Structure.

The way tabletop roleplaying games work, it would never be wise to think linearly with any story theory,  be Propp’s or Joseph Campbell’s. 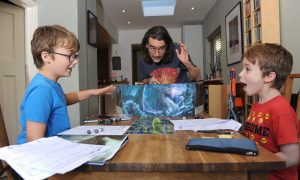 Instead, it’s helpful to think of them as something more akin to “encounters.” In that way, you could pull out 4-5 of the above, then shuffle them into an interesting order to build a little narrative structure that could be explored by players. (What about a  small dungeon where each room includes one the the above, for example? There is a lot of potential there.)

Or pick one from each sphere to serve as the framework of your story. Maybe even go nuts and roll a d30 (those exist), then take the results a the throughline of your narrative.

But those are practical ways to use Propp’s work. The most important way is more meta. Understanding story structure is important with D&D. Click through the above and begin to understand how so many of the D&D encounters we take for granted in D&D have a commonality with Propp’s functions, be it the reconnaissance of a villain, a quest giver that Propp would call a “Dispatcher”, or what have you.