In the last handful of years, I’ve renewed my passion for RPGs. It started back in 2009 when a former college roommate invited me to join a group playing the newly released D&D 4e, a time when I also met other writers from Nerds on Earth.

Fast forward to this year, and I got another chance to join a game with some Nerds on Earth writers, only this time it was Starfinder. All I knew about Starfinder was what I heard on The Drift podcast. In episode 2, host Jason Sansbury and guest Michael Adkins talked about what was known so far about the races and classes.

The little nuggets they shared about the Android race and the Envoy class sounded interesting. It wasn’t much to go on, but I thought diving into the deep end with a bard-like skill monkey of a support character sounded fun.

Androids get a -2 penalty for charisma, which happened to be the key ability score for an Envoy. This combination seemed like I was going against type, which got me psyched! As a counselor who works with kids with disabilities (and the father of an autistic son), my life involves a lot of reframing.

Parents hear there is something “wrong” with their child, and they need therapy to “fix” the problem. Teachers see a child behaving “inappropriately” and want to correct them. Kids with autism are quirky, and struggle with emotions and empathy. Right? 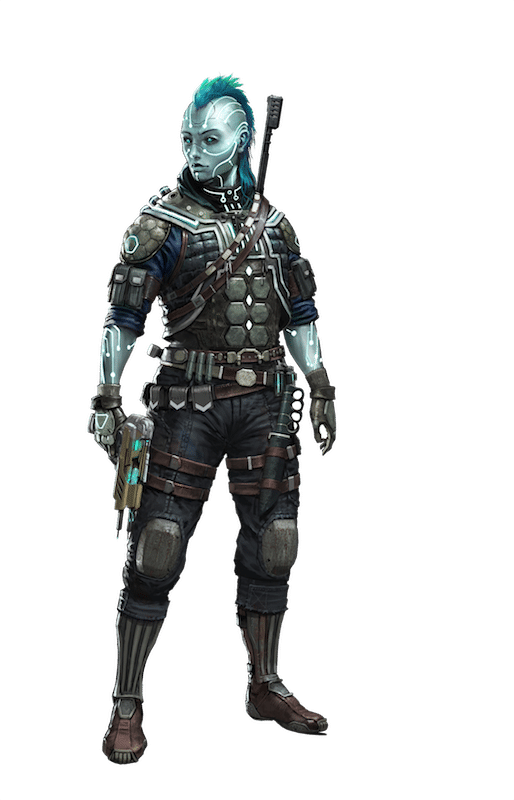 No, not at all. And Paizo just hung a curveball for me to blast out of the park! I get to play a character where the expectation is that they will have trouble in social situations (on top of the -2 penalty to charisma, Androids get a -2 penalty to sense motive). But an Envoy is supposed to be an expert at negotiating social situations. Now, I am not playing my character as autistic, or comparing autistic individuals to robots or androids. My sole point of comparison is that people make assumptions based on labels, and I relish the opportunity of challenging those assumptions.

Autistic individuals are different, not less, not broken. When you understand how somebody experiences the world, it’s easier to understand their behavior and provide appropriate supports (no one would accuse a child in a wheelchair of being defiant for refusing to walk). And people with autism are empathetic and understand and feel emotions at least as intensely as others.

So my character has a lot in common with me, naturally. RPGs give us the chance to play something other than ourselves, but there are always reasons (conscious or not) why we chose what we do. We may play what we wish we were, what we wish we weren’t, or some combination of fears and desires; but, through that experience we learn more about ourselves, people like us, and more about others who are different as well.

The folks at Paizo gave Androids a great backstory. They are constructs, so like the replicants in Do Androids Dream of Electric Sheep (aka Blade Runner) by Philip K. Dick, they are treated like possessions and used for menial and or dangerous tasks. Androids aren’t just constructs though, they have souls. They rebelled against their makers/oppressors, and fought for and won their freedom and civil rights (lots of interesting and socially relevant issues to explore there). Because they are constructs, but have souls, they procreate (ish) by voluntarily releasing their body so a new soul can inhabit it. This process is called renewal.

How do I explore this idea of potential and challenging expectations? I could make a backstory for my character to make him exactly what I want him to be. That means that I’ve already made my decision on potential. But that felt a little disingenuous, through my counselor lens, to take those choices away from my character and to give him the experiences necessary to make him what I want him to be. I can’t challenge my own expectations if I do it that way.

So, I took inspiration from a well known character from an Italian children’s book: The Adventures of Pinocchio by Carlo Collodi (although admittedly, I was thinking more of the Disney incarnation). So, I decided to name my character P9KO (I thought it was clever, but I’m easily amused).

I decided for my P9KO’s backstory to be that he has no backstory. He was renewed just weeks before our campaign starts. When my P9KO first gained consciousness, he found a video from the previous inhabitant of his constructed body, GP-2 (Eh? Get it? Sticking with the Pinocchio theme).

GP-2 explained that the Vast described in the Starfinder setting can be a wonderful and a horrible place. He challenged P9KO to use his time to help others, to stand against injustice, and try to leave the Vast better than he found it.

Because he has so little experience, has so much childlike curiousity, and his predecessor encouraged him, I chose the Xenoseeker theme for P9KO. And a perk of this theme is it gave me back a lost point of charisma.

Starfinder Envoy: Into the Drift

P9KO is naive and gullible. Like Pinocchio, the characters that come into his life will exert their influence on him. Will he find people who claim to be his friends, but just want to use him or take advantage of him–like Stromboli or Lampwick? Or will he find a conscience to guide him, and keep him on the straight and narrow–like Jiminy Cricket and the Blue Fairy?

Because I was going for potential and wanted to leave his path open, I didn’t put any ranks into charisma based skills. Will P9KO become adept in social situations? Will he use his talents to support his crew or to benefit himself? Will he develop skills that allow him to intimidate and deceive others to get his way? Or will he be diplomatic and try to make the Vast a better place like his ‘father“ GP-2 wanted?

Nerds on Earth is actually recording our character sessions. Tune into The Drift podcast to hear how P9KO’s story unfolds.