Burglar’s Bluff: The Ideal Card Game for the Vengeful Individual

Once in a while, I get an inexplicable urge to play a game in which I can stomp my husband’s rear-end. I don’t really know why. Sometimes, a girl just has to win a game… and by win, I mean my opponent needs to be beaten to an actual bloody pulp (figuratively speaking, of course!).

For this particular instance, when I feel particularly vindictive, I think I’ve found my go-to game: Burglar’s Bluff, created by Wrinkle-Free Games, is a fun, simple, yet creative card game that you can play when you’re not in the mood for anything too heavy, but you really feel like getting competitive.

In this classically greedy game, you collect treasure cards in your bank, while still having to defend it from your opponent’s grabby hands–and maybe even do some grabbing of your own–so that you can collect the most treasure by the end of the game. This can be played with as few as two and as many as four players; however, the oh-so-helpful and much appreciated .pdf of an extended copy of the rules can be found on the Wrinkle-Free Games website–and contains directions for an extended game for 5-8 players! 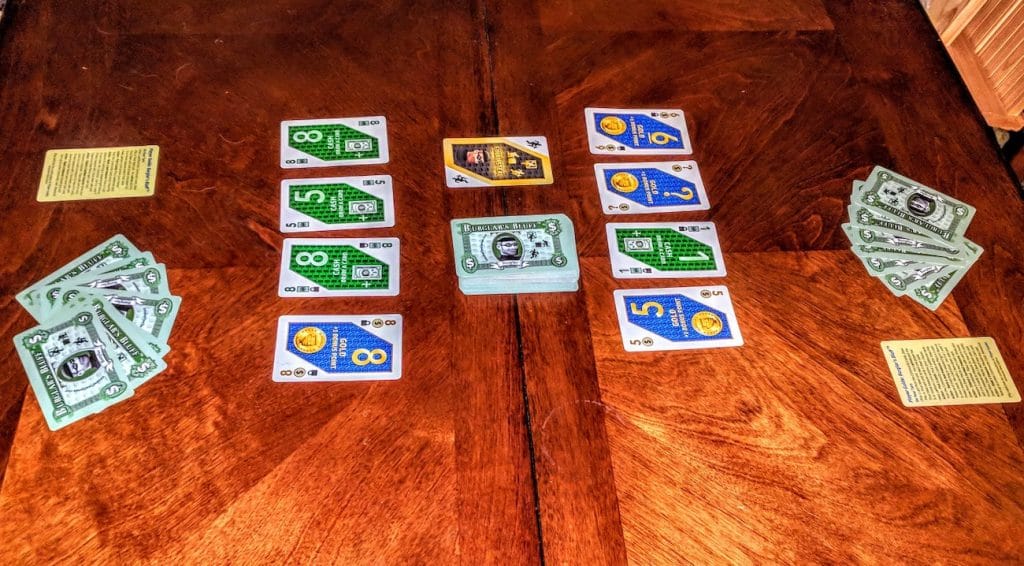 I mentioned earlier that you collect treasure cards in this game; they can be broken down into two categories:

●  Cash Cards​​: when you bank these, you will draw the same number of cash cards that you banked from the playing area at the end of your turn!
●  Gold Cards​​: banking gold cards will not pay out in the midst of the game, but will give you bonus points during the end-of-game scoring!

And that’s it! Have I mentioned my love and appreciation for beautiful, wonderful simplicity? There are only two types of cards in this game, but depending on how you use them, they can be quite complex!

Treasure cards can be drawn from five different places in this game: the ​Draw Pile​​, your ​Hand​​, your ​Bank ​​(or somebody else’s), the eight face-up ​Community Cards ​​in the middle of the game area, or the ​Final Steal ​​card, signaling the ending of the game.

Treasure cards are used as deposits in the bank, ​safe cards​​ that act as locks (or pretend-locks!) for your treasure ​sets (cards numbered the same) and ​runs​​ (cards in consecutive order), or used as ​burglar cards that end up amongst the Community Cards so that you can attempt to steal your opponent’s treasure! 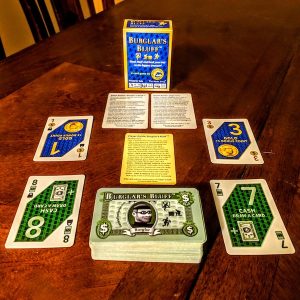 The gameplay is pretty straightforward, with three items to check off of your list each round:

And then, on to the next player.

Glad you asked! On your turn, once you draw your card, you may do one of several things; you could replenish your hand by drawing three cards from the playing area, bank a new treasure, add to an old (but unlocked!) treasure, or, my personal favorite, ​ ​steal a treasure! Now, the first three are pretty easy to understand: draw some cards, put some cards in your bank, get some points. Simple. The last one is where things can get really interesting.

…because you will need it! This game is quite deceiving, at first; the small box of cards does not even begin to hint at the level of competitiveness it has the potential to bring out in even the meekest and most non-competitive players (myself included). And it all revolves around that wonderful little steal action.

Is the treasure locked or unlocked? Will you make the steal and gain a new treasure or be foiled and walk away empty-handed, gaining points for your opponent? This is the true art of the game where, as suggested in the name of the game, as well as the gameplay of many famous card games, you must learn to bluff (and learn when your opponent is bluffing)!

In my case, I realized that my husband was really determined to extend many of his treasures into these long, sweeping runs, and would typically try to leave them unlocked for quite a while. I, of course, took full advantage of this and robbed him blind. However, when he attempted to rob me back, I thwarted him by mysteriously keeping my sets and runs in various lengths and states of lockedness.

Burglar’s Bluff: Is There Honor Among Thieves?

Decidedly, no. If you want to have fun, leave the honor at the door! Steal from everyone and let none steal from you! Remember, the name of the game is “Burglar’s Bluff,” not “Honest, Law-Abiding Citizen’s Bluff.” Be mysterious, keep your poker face on, and never hesitate to ​go after that treasure!

If you are interested in playing Burglar’s Bluff, check out their Kickstarter starting October 9, 2018!

Reporting on the Board Game Market: At Look at Renegade Game Studios