My 90s Summer: It All Ends with Rune

Welcome back to the last edition of My 90s Summer! That’s right, this is the last issue! A collector’s item, if we’re going by 1990s logic. Fall has arrived, and I have reached the limit of what I can physically, mentally, and emotionally take for this experiment. I have been reviewing comic books all summer long that were released, and I originally read, back in the 90s.

It’s mostly been a fun experience. Mostly. I in no way, shape, or form have depleted my anticipated list of books I wanted to review. Left unreviewed this summer are titles like Dark Horse’s X, Marvel’s Silver Sable, and an epic three-part rereading that I had planned for DC’s Death, World Without, and Return of Superman. What’s that they say about the best laid plans? I simply ran out of time. Perhaps I can revisit the 90s next summer… if someone pays me. Cash money, up front, and with no strings attached. Do you hear me, editors? I’m not putting myself through this again for free! CASH! THAT’S THE PRICE OF MY SANITY!

However, seeing as how I am six weeks deep into teaching this new semester and how Fall is officially in full swing, it’s time to close this experiment. I’m closing on a semi-positive note as well. This week, I’m looking at another comic from Malibu’s Ultraverse, Rune.

Earlier in the summer, I reviewed one of my favorite 90s titles, Prime. Both Prime and Rune were a part of Malibu’s Ultraverse line. As I described in the Prime review, the Ultraverse was Malibu’s attempt to establish a shared superhero universe like the Marvel Universe. The attempt failed due to sagging sales. The company was purchased by Marvel, who basically shuttered the whole shebang because… meh.

And “meh” is a pretty apt description of almost the entire Ultraverse. The characters didn’t really click with the number of readers needed to sustain a shared universe of characters that were all a little too close to resembling characters from other companies. Nearly every character was basically a ripoff and/or pastiche of well-established characters from DC and Marvel. That’s a common thread throughout the 90s for indie publishers. Competing with the real thing doesn’t work out for the various carbon copies produced by companies like Image and Malibu. 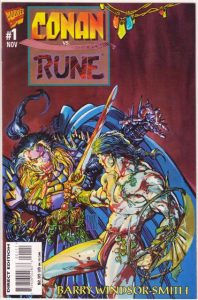 So who was Rune copying? I liken Rune to Morbius, the living vampire from Marvel, who was having a bit of a return himself in the 1990s. Rune was a vampire-like creature, except he was a SPACE vampire, which is totally gnarly because it was the 90s. Space vampires are so… EXTREME!

I originally read the first five issues of Rune and that’s what I did for this last challenge. Going back and researching a bit on Rune gave me pause because he wasn’t around very long. The original Rune series ran for 9 issues, while the Marvel reboot lasted for a whopping seven. Outside of guest appearances here and there in the Ultraverse books, Rune did have a nice crossover with Conan in the epicly titled Conan vs. Rune one-shot.  Ultimately, Rune appeared in only 51 comic books total during his short lifespan.

Rune was created by comic book legend Barry Windsor-Smith, who provided art for the first six issues of the series. Chris Ulm helped BWS coplot the series as well. I don’t really know much about Ulm, as it appears he coplotted random issues of Ultraverse titles here and there, but not much else. Maybe he was a fellow space vampire brought on by BWS as a consultant. That would be… EXTREME! 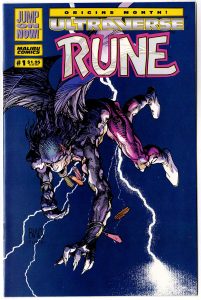 on earth for a very long time. He was a normal humanoid until he found the Star Stones, which transformed him into the creature that he is today. These stones help him absorb the essence of others as he sucks on their blood and munches on their entrails. Despite his longevity, Rune finds himself dying of cancer in the 1990s. He has found that if he drinks the blood of super powered individuals and absorbs their essence, it gives him a boost, like space vampire cocaine.

This thirst for super powered blood leads Rune crashing into the bedroom of Erik Johnson, a teen who has just found out that he has super powers. Rune ends up killing Erik’s dad and escaping. Mmmm. Dinner! Rune escapes, but is captured by the shadow organization Aladdin, who has plans for Rune and are also responsible for creating Erik and his unknown twin brother’s new powers. PLOT TWIST! Okay, whatever, it was pretty dopey, and the Ultraverse cornered the market on dumb plot points in the mid-90s.

From there, readers are treated to a proverbial who’s who of dumb plot points from the Ultraverse. Parents who aren’t real parents, shadowy organizations, insane military men/scientists, lots of murder, a nosey girlfriend who ends up being a dead girlfriend. I feel like literally every Ultraverse book had this basic structure to the first few issues.

Blah, blah, blah… I could go into more detail about the actual story but it seriously took me THREE WEEKS to finish five issues. Everytime I looked at the books on my bedside table, I wept. It was as if Rune was absorbing my joy for reading comic books with his Star Stones. Seriously, editors. I need cash if you want me to do more. Cold, hard cash,

Here’s the short version: Rune ends up fusing the two twins together and is 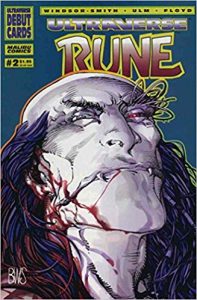 cured of his cancer by biting the new creature Gemini. In classic form, Rune promises to kill Gemini when they next meet. You tell ‘em, Steve-Dave!

There was no shortage of dumb from these first five issues, but it wasn’t horrible. It’s precisely what I would expect from a defunct line of forgotten characters that never really had a satisfying end. It wasn’t filling. It was junk food reading.

At least the art was pretty! Well, sort of. BWS has always been an excellent artist, and he definitely turns up the gore with Rune. There are no sparkly vampires here. Rune is meant to be a disgusting vampire creature, but his actual practice of consuming victims is more akin to a zombie munching on some freshly dead flesh. BWS obviously relishes drawing the gory details of these mealtime encounters.

Why You Should Check it Out

I’m morbidly interested in dead books, characters, and universes. I think it’s kind of fun to poke at the corpse of forgotten characters and broken dreams. Somewhere, somehow, every character is somebody’s favorite. There has to be a fan or three out there of Rune. Marvel decided to let these characters fade into the dustbins of your LCS’s dollar aisle.

In many ways, the Ultraverse characters are easily forgotten because of their flimsy originality. But this means the books can usually be found exceptionally cheap. Paying anything more than a buck for any of the Ultraverse titles is a poor financial decision for anyone, but the books were kind of fun to read. If you can find them in the rare quarter bin at a comic shop, it’s worth your time to give the Ultraverse books a go.

That’s it, folks! Thanks to all four of you who have been reading my reviews all summer. Who knows? I might be back with more 90s reviews if the editors here pony up the hefty financial retainer I have officially requested. Until then…

Don’t overpay for Darkhawk. Seriously. How is that still even a thing?