I was playing D&D Adventurers League once and a player had his druid climb up onto the roof every time we interacted with a new NPC. If the situation involved a skill check, if there was any sort of mystery about which direction to go or what path to pursue, up to the roof he went.

“Uh, is your druid sitting on the roof?” the NPCs asked. What was seen as goofy fun the first time, quickly turned into a pain in the butt for every other player at the table. Any “puzzle” aspect of D&D frustrated the player to the point that he literally had his character disengage so that he won’t be forced to engage the puzzle.

To the player’s credit, he apologized after the game. It turned out that he couldn’t keep his attention on the puzzle parts of D&D and the oft-circular conversations those create around the table, so he didn’t know what to do with himself until initiative was rolled. Unable to follow the meandering skill checks of the game, he goofed off instead.

Everyone understood that, so we assured him he wouldn’t have to take to the rooftops in the future. Instead, we recognized there was a lesson here, which is that the puzzle aspects of D&D can easily turn into a boring committee meeting that feel anything but fun for a lot of players.

But making the mystery/puzzle aspects of D&D more engaging for the entire table is not as simple as it sounds. The tabletop roleplaying game industry is one that is predicated on words and they lay those words on thickly, with big books filled with blocks and paragraphs of text.

That’s why the flowcharts in D&D Waterdeep: Dragon Heist and the new iconography of Pathfinder 2nd Edition are so welcome. There are times when a nice infographic or a gosh-danged bullet list is golden, yet RPG books continue to only deliver walls of text. I’m one to talk; here I am using my words, not my pictures. ¯\_(ツ)_/¯

For particular learning styles, tracking the bread crumbs of NPC interactions understandably doesn’t always engage them. Besides, one quick trip to the potty or a distracting Doritos bag can make them feel out of the loop.

In other words, not everyone at the table approaches puzzles with the same enthusiasm nor does everyone unravel them at the same rate. But what do we do about it? Here is an odd tip. Mileage may vary.

Put it on a grid.

Those old logic puzzle books that you used to buy in a drug store magazine rack are long out of vogue, but they have lots to teach the RPG community. There are some online logic puzzles that can give you an introduction, plus the website has downloadable blank logic grids. (Trivia: Paizo developer Jason Keely began his writer career with puzzle books!)

The image gives an example of a simple grid. The latest D&D adventure–Waterdeep: Dragon Heist–has a really complex mystery that takes up an entire chapter of the adventure. Rather than have some players around the table climb onto the rooftops, why not give players a handout that “coaches” them through how to solve the puzzle logically. 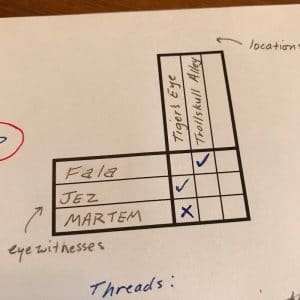 As you’ll see, I simply jotted down the major questions, listed some key NPCs and location, plus got them going on accounting for the loose threads. This allows:

This is a really simple technique. And a blank grid is an easy tool for a DM to give to players, and one that will get puzzle solving off on the right foot, engaging players from the beginning. It’s no magic bullet, but it does provide simple guardrails to allow for consistent progression.

Adventure writers are accomplished puzzle writers, but they often fail to account for different learning styles or table dynamics. Many players simply aren’t keen on keeping dozens of verbal hints straight, particularly when there are distractions all around them.

So get them off the rooftops and give them a simple tool to engage them in the process.

The Return of the Lazy Dungeon Master Does Not Disappoint

My 90s Summer: It All Ends with Rune