The Return of the Lazy Dungeon Master Does Not Disappoint 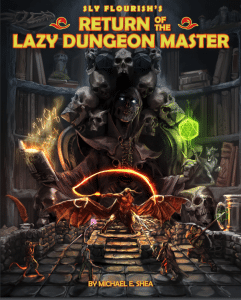 One of the things that I personally have come to love about the roleplaying game community is the number of people who want to invest in it to make it better. Mike Shea aka Sly Flourish is one of those people; whether you are following him on Twitter, watching his streams as he prepares on Twitch or listening to his podcast DM’s Deep Dive, he is always looking and working to share things to make the gameplaying community better.

So it is no surprise that his latest book offering, Sly Flourish’s Return of the Lazy Dungeon Master, is a great read for gamemasters who are looking for opportunities to learn and grow and expand their skills at running a game at the table.

Previously, Shea had released the book The Lazy Dungeonmaster and it is a great volume and worth checking out. But if it serves as a sort of 101 level course, this new volume, which was supported and funded via Kickstarter, serves as the 201 course based around one simple idea:

DMs should prepare what matters for their game.

Whether you are a newbie DM or been running games for years, Shea has a basic premise that most of the time, we are over-preparing for our games and we can help ourselves by focusing on some key areas that are most likely to get engagement in the course of our game. 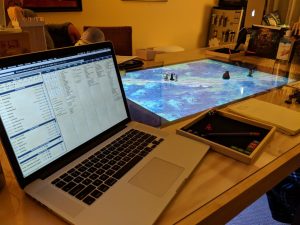 Over the course of the book, Shea focuses on 8 questions and pressure points where a DM should pay attention and focus as they prepare for a session. These questions seem pretty straightforward and I can imagine that even just having the list of questions would be beneficial to most. And Shea believes in that core idea enough that it is included in the sample that anyone is free to download here. But, if you are willing to get a copy of the book itself, it will help you even more in making good, compelling games for your players.

For instance, one of the challenges Shea offers is that we should work to create strong starts for our sessions. Unless you have left everyone hanging in a cliffhanger-like ending from the last session, you will want to spend some time working to create a stellar opening, something that is going to grab the attention of players and get your session moving forward with conviction and speed. I know I have certainly been guilty of doing a slow review of the previous session and poorly asking everyone “So what do your characters want to do?” and we drizzle ourselves into a poor opening for the session. Instead, by spending some time and focus on what we are launching into, it makes the whole session that much more compelling. While this may feel intuitive to all of us in a sense of “Of course, I know this!” it is a great reminder and challenge.

An area that Flourish has introduced me to is the idea of “Defining secrets and clues”. What he means by that is to be very intentional in creating short, powerful, effective statements that help move the story forward. But, you also don’t want to make the mistake of making that how and why they are discovered; we just prepare them and get ready to know that at some point, we will be able to deploy them. For me, this idea was completely new but it has helped me be intentional about moving the story forward but also being flexible 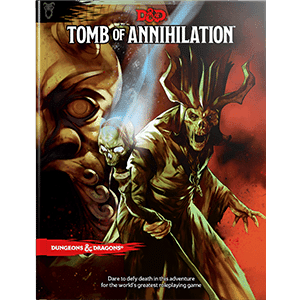 enough to not get stuck if the players don’t do exactly what I hope they would.

So whether you are a new DM or a veteran that is looking to help improve on your already well developed skillset, this book is definitely worth investing in. I find it is a good tome to have near me where I can pick-up and be challenged as I am preparing for a game and make sure that I am using the time I have in the most valuable ways possible. It is available directly from this website, as well as available in a version for Kindle on Amazon and as an awesome audiobook on Audible!

And once you get a copy, consider checking out how Sly uses the checklist in preparing his own game for Sunday afternoons, as he leads players through the Tomb of Annihilation. His Twitch has been around 10 AM on most Sundays and it has definitely helped me get a better handle on what he does and how he does it!

Reporting on the Board Game Market: At Look at Renegade Game Studios