Waterdeep: Dragon Heist is the newest adventure for D&D 5e. The back cover describes it as “a mad romp through the wards of Waterdeep” that will take players from from 1st through 5th level. I’ll provide a full chapter-by-chapter review below, but first, please indulge me as I take you on a quick romp around the block.

Anyone who has undertaken a huge new endeavor knows it takes a couple of years to really hit your stride. My personal belief is that Chris Perkins is the greatest living D&D storyteller (respects to the King of the Nerds, Gary Gygax). Perkins, of course, was in no way solely responsible for the launch of D&D 5e (his colleagues include the talented Mike Mearls and Jeremy Crawford). Still, Perkins understandably had a lot on his plate story-wise when D&D 5e was first launched just a few years ago.

This resulted in the first few D&D 5e adventures being very good, yet sometimes just shy of great. To be clear, I enjoyed Hoard of the Dragon Queen just fine and I thought Princes of the Apocalypse and Out of the Abyss had many, many moments of greatness.

But years into the release of D&D 5e, I read Tomb of Annihilation and it was that specific adventure where I had the thought that Chris Perkins was fully at the top of his game, having solidified himself as the GOAT-not-named-Gygax.

Now, having just turned the final page of Waterdeep: Dragon Heist, I felt like I read a Chris Perkins story so clever and brilliantly done that he has reached the point of confidence in his career that he could set the stage for adventure, then step back and invite a new generation of storytellers to make their mark on the story.

But…what do I know? Maybe I have read the situation entirely wrong. But even a gross mis-understanding of the internal processes of WotC doesn’t change this simple truth: Waterdeep: Dragon Heist is an astonishingly excellent D&D adventure. There are several sections of the book that don’t feel like they were written as much as they feel like the design team collected everything fun and enjoyable together in order to stuff them into a confetti cannon that was fired over the pages of Waterdeep: Dragon Heist and allowed to fall onto the pages like a glitter bomb of joy.

So, let’s take a deeper look, shall we? 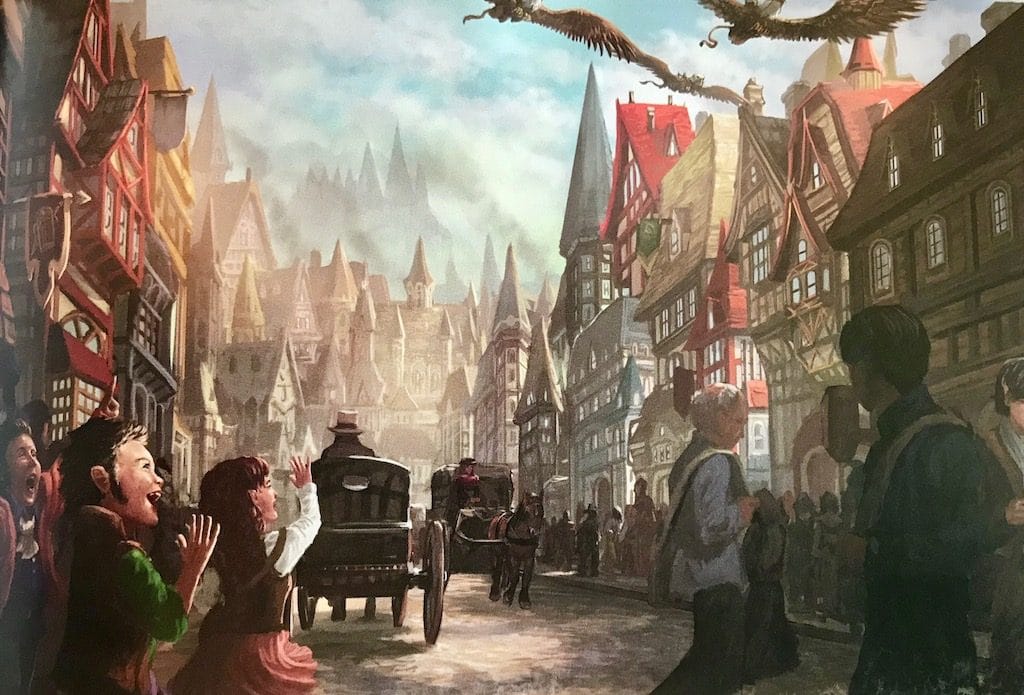 In order to properly review Waterdeep: Dragon Heist, an overview is first in order. In the splendid city of Waterdeep, a gold coin is called a “dragon” and a half million of those dragons are hidden somewhere in the city. A magical item called the Stone of Golorr is imbued with the location of the treasure vault but the Stone of Golorr is comically being passed around a huge cast of NPCs like a hot potato.

Players are on the hunt, but their madcap chase is complicated by the fact that there are warring, jostling factions in Waterdeep. These factions might try to recruit the PCs just as quickly as they try to kill them, the end result being that their are four different villains the players can confront:

Are you having fun yet? Because I had fun just reading the introductory chapter, which perfectly set the stage for adventure. But if it sounds like a huge cast of NPCs and different possibilities for villains might make Waterdeep: Dragon Heist difficult as an adventure for first time players or DMs, you’d be correct.

Perkins and his team clearly understand this, so included in the book are coherent overviews and well-done flowcharts to help track the adventure. Still, this isn’t a D&D adventure that I can recommend you use to get your feet wet. (The Starter Box adventure Lost Mines of Phandelver is best for beginners.) Waterdeep: Dragon Heist is best for players who like intrigue, bluffing, subterfuge, and other roleplaying heavy skills.

It begins with a bar brawl and a quest from none other than the famous Volothamp Geddarm (chapter 1). Even Volo’s introductory quest has twists and turns, ultimately resulting in a case of mistaken identity. But it introduces lots of NPCs and allows players to get a feel for the city setting of Waterdeep.

Plus, the quest concludes in the most wonderful way possible, which is Volo giving the PCs a deed to an old tavern in Waterdeep! (chapter 2) In addition to giving the players a “home base,” this always allows players to feel at home in the setting, while also introducing quests that deepen the major factions of Waterdeep.

Even though the quests are effectively simple “dungeon delves,” Chapter 2 is wonderfully and thoughtfully done. Besides, even though many have begun to use phrases like “it’s just a dungeon delve” as a pejorative, that completely overlooks that delves and crawls are the meat and potatoes of D&D. 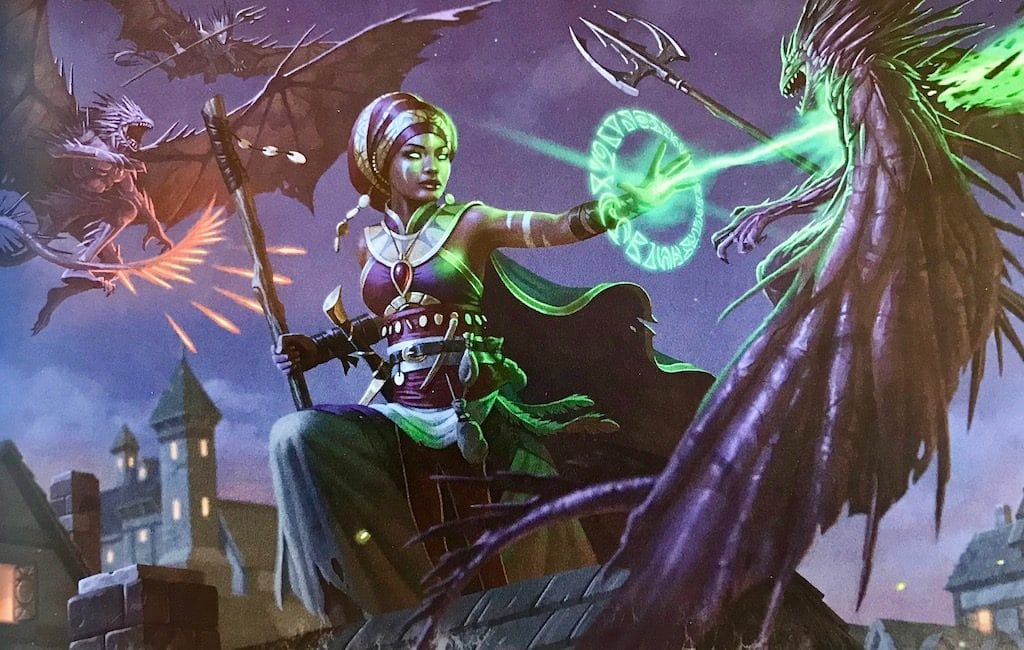 Chapter 3 is where Waterdeep: Dragon Heist stumbled for me. A fireball is detonated just outside the players’ new HQ, rattling the windows. This leads to an elaborate ‘who done it?’ that has the PCs working parallel to Waterdeep’s City Watch to determine the who and why of the fireball attack, before finally determining the where of the Stone of Golorr.

To be clear, it’s a well-written and exciting plot that reads like an episode of True Detective. But it involves a slew of NPCs and an amount of skill checks that could frustrate even the most patient DMs or the most intrigue-loving players.

One of the chapter 3 headings was “What’s Happening Here?” At times, I couldn’t tell. My recommendation would be to allow the City Watch to solve that mystery and feed the information to the players so they can jump right into Chapter 4: Dragon Season.

I won’t beat around the bush: the 40 pages of chapter 4 are among the absolute best that I’ve ever read in any roleplaying game book, ever. What they outline (again, with the help of a handy flowchart) are ten different encounters that range from a classic old tower to a mausoleum to a wharf or a chase across rooftops.

Depending upon which of the four villains is chosen, the ten encounters are shuffed into a unique sequence. Then each encounter is re-jiggered according to the season, giving fresh elements to each of the 10 encounters for the spring, summer, autumn, and winter, respectively. At the end of each encounter chain, players should now have the Stone of Golorr, attuning them to the location of the horde of dragons. It’s dope.

Huzzah! After one final tussle with the villains, the players exit the vault and return the treasure to the proper authorities, becoming celebrities as word of their deeds spread throughout Waterdeep!

But chapters 5-8 do excellently detail each villain’s lair should the player characters have delusions of grandeur. Otherwise, the now 5th level characters are invited back to the Yawning Portal in order explore Undermountain, the next book coming from Chris Perkins and the D&D team.

Volo’s Waterdeep Enchiridion (chapter 9) beautifully paints a picture of life in Waterdeep. DMs will want to read it for the adventures of Dragon Heist of course, but home brewers will dig it, as it is a nice aid for further adventures in Waterdeep, or even a generic urban-based story that is thunk up. It’s not a full gazetteer, but the chapter has enough hooks to hang up all the mittens and coats from a long Minnesota winter, making it a nice value added for future adventures in the splendid city of Waterdeep.

Closing the book are the typical appendices that detail NPCs, new magic items, and player handouts. But I want to close by talking about maps. First, tucked into the back cover is a large removable map of Waterdeep. It has one side for players, while the other side is for GMs and includes marked locales. It’s fantastic. I don’t know what the economics are of getting a map like this tucked into every D&D book, but I hereby start a petition that it should hereforth be the law of the land.

The interior Dyson Logos maps in the book aren’t to my taste. I fully admit the sparse black and white maps are very usable (quick to draw or easy to snap a picture, then print out), but I would have preferred them as free digital downloads, allowing the actual interior maps to have the added color and details. As Banky taught us in Chasing Amy, inkers and colorists aren’t simply tracers, they really add depth and definition to a drawing. I would have liked to see that depth and color in the book’s included maps. But, again, that’s just a personal preference.

What I love about Waterdeep: Dragon Heist is that it isn’t a hyped-up world-destroying cataclysmic event designed to have PCs face down villains in order to prevent total doom and destruction. Instead, it’s like Cannonball Run or the Amazing Race if all the contestants were, you know, wizards.

I close this review as I began it. Waterdeep: Dragon Heist is an astonishingly excellent D&D adventure. Kudos to Chris Perkins, the entire D&D team, and for the new designers to D&D, who certainly added freshness and creativity to the book.

It’s a great time to be a D&D player, a good reason being that we all get to enjoy a wonderful city-based adventure for the world’s greatest roleplaying game. So I highly recommend Waterdeep: Dragon Heist as your next D&D campaign. And if you aren’t considering running it? Well, Nerds on Earth’s jack-booted thugs will soon be arriving at your doorstep to push a 20-sided die into your palm. Resistance is futile: Xanathar sent us.

You can get Dragon Heist here. Better yet, ask for it at your FLGS.

[Disclosure: Wizards of the Coast sent Nerds on Earth a copy of Dragon Heist in exchange for an honest review.]

Rolled and Told Crits Where It Counts