The cobalt blue Eye of Horus has a thousand year reputation for warding off the mystic malevolent forces of the ‘evil eye.’ Indeed, there are few charms more recognized than the Eye of Horus. But now it’s a fashion accessory or a way to make a buck. Case in point: Miley Cyrus, Kelly Ripa, and even Kim Kardashian have been photographed on many occasions wearing bracelets and headpieces featuring the Eye of Horus. 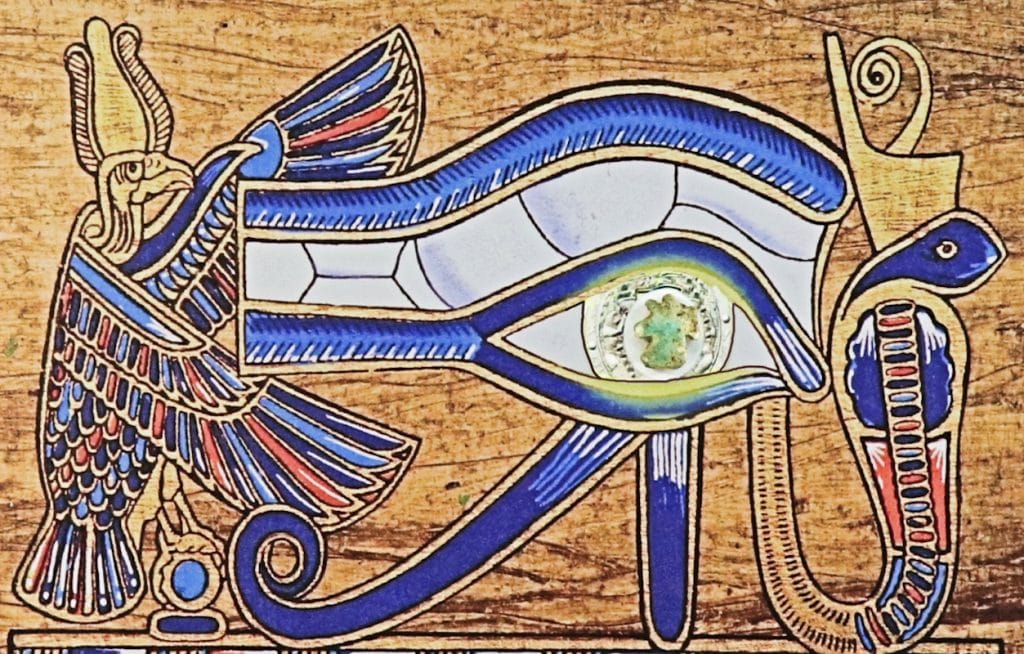 To understand the legend of the mystical ward, one first has to understand the differences between Horus, the Eye of Horus that is often in the form of an amulet, and the concept of the ‘evil eye,’ as they aren’t interchangeable. The ocular amulet is actually the charm meant to ward off an evil eye, which is thought to be a curse transmitted through a malicious, envious glare.

This curse of the evil eye is not a complicated concept. Basically, it arose from the belief that someone who has achieved great success will also attract the envy of those around them. An envious person in turn can curse the person by giving them the ‘evil eye,’ thereby undo their good fortune. I know, I know, it’s Horuss**t but it does explain why Kim Kardashian frequents the cobalt blue amulet: she thinks folks are envious of her and her success.

Plus, despite the ridiculousness of it all, it is interesting. As is Horus himself, so let’s go back to Ancient Egypt.  There are innumerable Coptic (Egyptian) temples dedicated to the falcon god Horus, the god of the sky and protector of the king.

Although it varied by age and region, the most common myth describes Horus as the son of Isis and Osiris, who played a key role as Osiris’s heir and the rival to Set, the murderer of Osiris. It was said that the right eye of Horus was the sun and the moon his left, and that they traversed the sky when Horus, as a falcon, flew across it.

In the The Contendings of Horus and Set(h), it was said that Set, the patron of Upper Egypt, and Horus, the patron of Lower Egypt, had battled for Egypt. Horus lost his left eye and Set a testicle. Needless to say, the gods sided with Horus on that one. 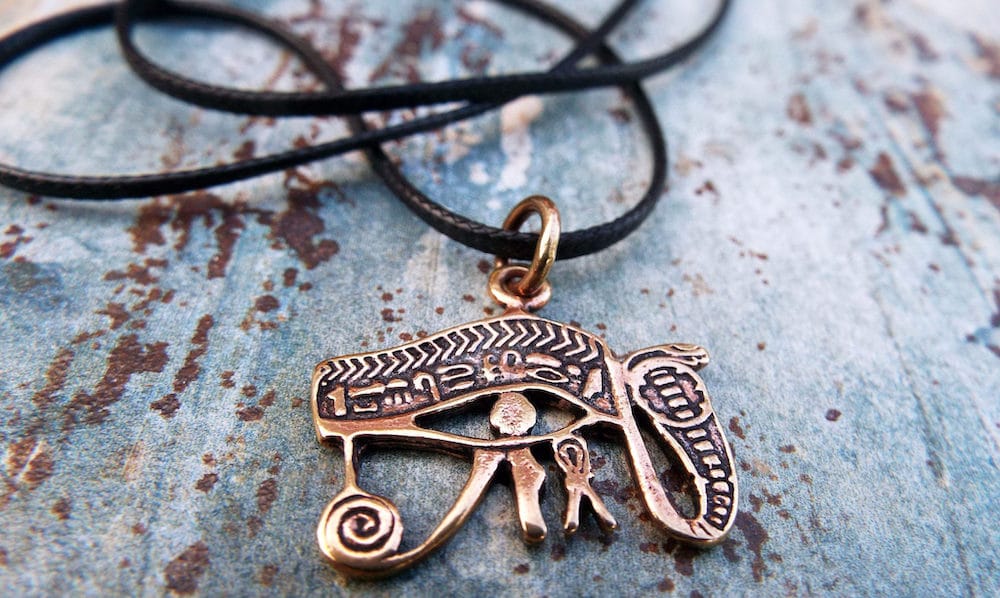 But rising from that, the Eye of Horus became an ancient Egyptian symbol of protection, royal power, and good health. Funerary amulets were often made in the shape of the Eye of Horus, many including the “teardrop” marking sometimes found below the eye.

There were several stories, a possibility that a right eye symbolized Ra, plus lots of crazy numerology for the fraction geeks out there that suggested that the right side of the eye represented ​1⁄2, the pupil 1⁄4, the eyebrow 1⁄8, the left side of the eye ​1⁄16, the curved tail ​1⁄32, and the teardrop 1⁄64. Again, Horuss**t, but fascinating nonetheless. 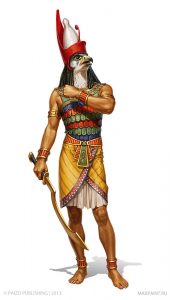 Horus and the entire Egyptian pantheon is fascinating and rich with inspiration for your roleplaying games. In fact, I was reminded of Horus by the Find the Path podcast, a group of role-players who are playing through the Mummy’s Mask Adventure Path for the Pathfinder RPG that is set in Osirion, their analog for Ancient Egypt. If you like Brendan Frazier’s The Mummy, the podcast will be fun for you, as one character in particular has ties to Horus.

Indeed, the falcon-headed god Horus and his Eye have long been seen in popular culture. But the falcon-headed god who is more glam than even Mr. Sinister, is cool enough to drive a Burt Reynolds era Trans AM, and has an Illuminati reach from the Free Masons to the Seahawks logo, is now simply turned into tchotchkes. Alas, it seems like Horus really has his eye on Kim Kardashian, which totally makes me envious.