Timeless: A Great Introduction to Drizzt, One of Fantasy’s Most Iconic Characters

I’ve a confession to make as I begin this article: While I own the majority of R.A. Salvatore’s novels featuring Drizzt, I have not read a single one. I’ve collected them over the years knowing of their acclaim, but they keep getting pushed further down my reading stack by other series and genres.

All that is about to change.

Timeless is an interesting bird of a book that I believe is very well and very intentionally designed. It functions as three books at once:

It does this by splitting its narrative between what has taken place in the past and what is going on in the present.

R.A. Salvatore’s Timeless: The Past Filled In

In the historical segments of the book, readers are made privy to some major Menzoberranzan (a drow city in the Underdark) house drama. Jarlaxle (a character who will prove familiar to those well versed in the Drizzt series) is hired to steal a weapons master, Zaknafein, from one house and deliver him to House Do’Urden as both an asset and, well, breeder. He will eventually father the titular Drizzt with House Do’Urden’s matron Malice.

These sections contain the budding buddy relationship that develops between Jarlaxle and Zaknafein, and Salvatore’s presentation of this pair is a large part of what makes this book shine. Even when they’re at odds with one another, there is a lot of respect between the two – right along with a hefty dose of ribbing. Their constant games of whit and snark are balanced by their trust and reliance, one upon the other.

You’re also given a lot of characterization for Zaknafein that will eventually come to explain much about Drizzt. You’ll see that some of Drizzt’s best qualities find their origins in those of Zaknefein. He’s more than Drizzt’s biological father; he was his dad–teaching him far more than how to wield a weapon.

The Tease of Other Drizzt Narratives 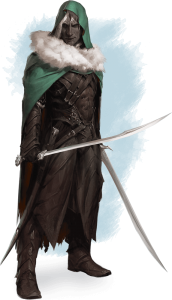 Throughout the sections of the book that take place in the series’ present, characters make references to the goings-on of other novels in the canon.  Little teases of these other stories had me desperately wanting to visit them so I could have them in full.

These moments will be pleasant callbacks to readers who have followed Drizzt since The Crystal Shard (Salvatore’s first published novel). If you aren’t familiar – like myself! – plenty is spoken of those events to make some sense of why they’d be relevant to the conversations taking place, so you won’t be lost. But just enough is withheld that you’ll likely want to look them up!

In the series’ present, Zaknafein is resurrected…By whom? For what purpose? This first book swirls with rumors for answers, but none is definitively given. That remains to be seen.

But he’s reunited with his son, for whom he gave his life long years ago. The world isn’t as he knew it during his first lifetime…and neither is his son. There is familial drama as well as some major culture shock for Zaknafein, and R.A. Salvatore writes the tensions they create well for both the resurrected Zaknafein and Drizzt. Jarlaxle is written as an excellent mediator; serving as a bridge between the past and the present.

But that isn’t all that’s going on here! Lloth, the Spider Queen goddess of the drow, seems to be growing in power and ambition. The web she’s weaving is quickly outgrowing the vastness of the Underdark and reaching the surface. Demons are about, and while she is undoubtedly the cause for their presence…no one seems confident of her endgame.  None, at least, on the side of good.

As the book proper ends, not much is resolved.  And as the Epilogue unfolds, even more questions are raised. Timeless will not be the feared “last of the Drizzt novels.”

Salvatore’s work in Timeless is excellent. The pacing is high, slowing only when the matrons of Menzoberranzan conspire–but those moments are not without purpose. He writes combat supremely well; evoking scenery, feats, and ingenuity that are the wet dreams of every Dungeons and Dragons player. As I read them, I was reminded of the “How I think I look/How I actually look” memes as I compared the battles of Timeless with those of my own 5e characters’ experience. 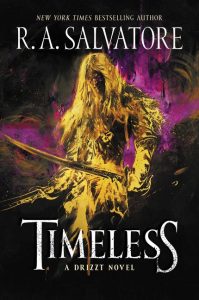 I’d also like to take a second and give a shoutout to the cover artist for the book, Aleksi Briclot. The cover is gorgeous!  A little research into his portfolio revealed his work on a whole slew of other nerdy properties.  His Tumblr is definitely worth a look!

From the perspective of someone wholly unfamiliar with the other novels in the series, Timeless was majorly successful: Engagingly written, inclusive of those outside the lore, and leaving much to be discovered in future installments.

Timeless is a fantastic place for newcomers to the Drizzt series to onboard as well as a continuation of a beloved and iconic character’s story.  You can order a copy from Amazon here!

[Disclosure: HarperVoyager provided Nerds on Earth a copy of Timeless in exchange for an honest review.]

My 7 Favorite Board Games from GenCon 2018

The Generations Trilogy of Drizzt Novels Concludes with Relentless

The Generations Trilogy of Drizzt Novels Concludes with…