Master of Wills is a deck building game that plays a bit like the classic (and ancient!) Mancala.  As you perform move actions within the community, you might attract or repel certain sectors of the community to your faction’s cause.  Recruits and Loyalists for your Faction can still be swayed to the opponent’s side, but if you manage to move individuals to your Allies (think of this like your bank in Mancala), they are yours forever.

The game plays simply enough:  You choose an individual from the Community area on the board who is currently a neutral party and you bring them to your side.  Doing so also causes other Sectors to either move towards or away from you (and therefore towards your opponent’s side!).  They might also bring a few new faces to the Community or allow you to perform a Faction action; special and powerful cards that can heavily influence play or end game scoring.

That’s really it:  Pick a single card, perform its actions, and pass your turn.

But Master of Wills‘ simplicity betrays its strategy.

First, let me brag on Master of Wills‘ component design.  It is super, super thoughtful.  Take a look at the card to the right, for example.  The oversized card’s art alone is about the size of a standard playing card, and all of it is gorgeous with a futuristic, cyber-punkish style.  But the information at the top of the cards is were the genius begins.

Everything you need to know about this card is visible in the uppermost inch: 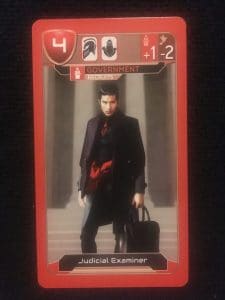 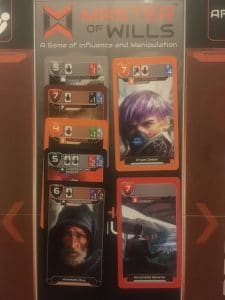 because the game board, though large and rather spacious for a card game of any kind, will definitely get a bit crowded during the eight rounds of play.  With the information nestled at the top, you can stack the cards as shown to the right and while you’ll cover up the pretty art, you’ll still be able to see everything you need to see in order to select or move every card.  Smart, smart design!

The game also has a KILLER website that lets you do everything from shop to browse all cards in the game and even design and name your decks.  It even tells you what your custom deck’s play stye and powers are based on the cards you select.  Very cool!

While Master of Wills markets itself as a deck builder, it also allows for some flexibility on that front.  While there are rules on how to hand select the cards which will serve as your Faction deck, there is also a permission granted within the rulebook to just shuffle the whole lot of them and play that way.

If you do pursue the deck building route, you have the opportunity to compress your Faction’s 49 cards down to a hand selected and customized deck of as few as 20.  This certainly adds an element of depth to the game, and there are five unique Factions with differing play styles available for Master of Wills; two come with the game and the other three are available via expansions.

The only thing I didn’t really dig about Master of Wills was the 2v2 play variant given in the rulebook.  It definitely felt bolted on a bit to give this 2 player game a bit more breadth, and my gaming group did feel like the sorta serpentine style turn progression detracted from the standard alternating style of play.  The only way the variant’s turn progression makes sense is if players on a team cannot speak to one another, and that is neither printed anywhere in the rulebook nor sensible.  Next time we play with 2 teams of 2, we’ll just stick with the alternating turns, I think.

That said, the Master of Wills website offers a few other play variants, including a solo mode, that are interesting!

Master of Wills‘ strength definitely lies in its strategy.  On your turn, you have to move a card from the Community to either your Recruits, Loyalists, or even Allies spaces.  The trick is figuring out what the most advantageous play for you is while doing your best to prevent giving your opponent an advantage!  All cards on the board are manipulated by moves so long as they are not banked in an Allies space. So while you might drop a high point value card into your Loyalist space, you might chase double its value away to your opponent’s side in the process; possibly even moving cards into their Allies space – beyond your influence!

Of course the play might be worth it if it allows you to play a Faction card or bring a few new faces to the Community.  It could be that every card in the Community stands to be a huge benefit to your opponent and you just need some more options!  Or perhaps you’ve got a particularly powerful Faction card in hand that might turn the tide.  Sometimes you’ll select a Community card for the action’s sake alone. 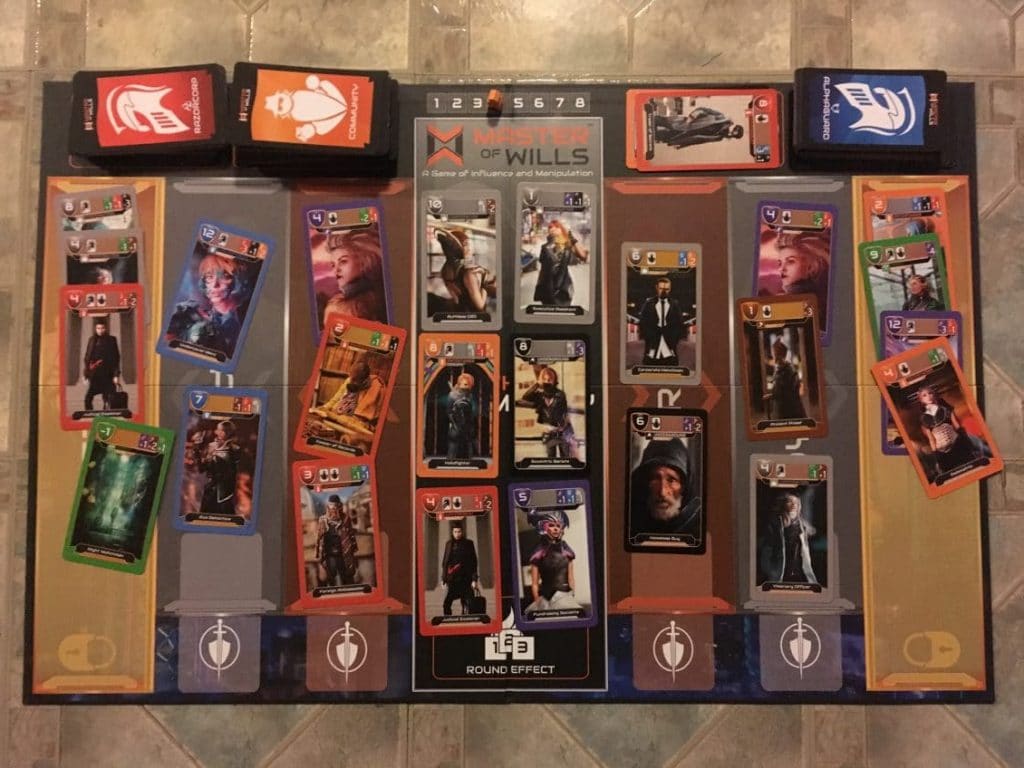 As a couple of added tricky bits to consider:

Overall, Master of Wills is pretty darned great.  I love that one of my gaming friends remarked “Is this the whole rulebook?” when he cracked the box open.  I love more that I was able to explain the game in seconds using a single card as a reference.  I love even more that the fellas all want to play it again.  Between the variability of the Factions and the massive deck of Community cards, there is no way this game plays the same way twice.

A simple game with lots of life and a dynamic and challenging strategy?  I’m in.

You can snag yourself a copy along with any desired Faction expansions directly from the Master of Wills website here!

Disclaimer:  Tabletop Tycoon provided Nerds on Earth a copy of Master of Wills in exchange for an honest review.

Dungeons! and Dragons! and Anime! Oh My!

The Top 7 Most Anticipated Board Games of 2019