Build a Stunning Universe with Orbis

One of the best classes that I took in high school was Mythology. Not Intro to Mythology or Advanced Mythology III; just simple, basic mythology. Like the majority of Western myth courses, most of the class focused on the Greek & Roman side of things, meaning that we became very well-acquainted with Zeus’ convoluted family tree.

Without going into too much detail, stories of Greek mythology are all intertwined, branching off into many directions while retaining the same cast of characters. Whether you’re talking about Hermes stealing cattle from Apollo or Athena’s role in Perseus’ defeat of the Medusa, Greek mythology will take you on a wild ride through the fantastical world of high fantasy while still surrounding you with familiar faces.

After playing through a couple rounds of Orbis, designed by Tim Armstrong, you’ll experience the same sort of familiarity; the tiles and premise might stay the same, but the world you build will be radically different each time that you play. Not to mention that you’re taking on the persona of a Greek deity while doing so. Even though their names are omitted, we know the truth behind the tiles! 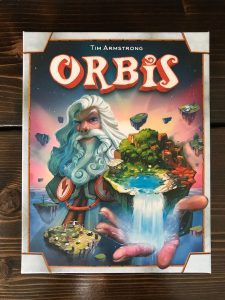 One of my other favorite games, Terraforming Mars, involves the gradual transformation of Mars’ surface to make it more habitable for colonists. In a way, we’re doing the same in Orbis, except that we’re trying to create the so-called ‘best’ universe possible for our supplicants, and we’re all working independently of each other.

Not only that, but if you’ve ever played Splendor you will find yourself confronted with some similar mechanics. There isn’t the same engine-building component that’s present in the cutthroat gem-selling simulator, but the careful prioritization of different cards should be familiar to you.

The center of the playing area will have a set of nine region tiles. With each player’s turn, they will select a region tile that they would like to add to their universe, pay any costs for the tile, and then place it in their universe by following the placement rules. These are fairly simple – each tile outside of the first row has to be touching at least one other tile of the same color.

And so the turns progress, each player picking the region tiles that YOU want, leaving you to reassess your strategy.

Over time, the universe begins to take shape, tapering upwards until it is finally capped off with a deity tile. These tiles are are going to give you bonus points at the end of the game. You can take one at any point on your turn in lieu of snatching up a region tile, so there is always a delicate balance of timing it out just right so that your plans pay off in the end. Whether it be having the most volcanoes or having a certain set of region tiles, the god tiles are usually the deciding factor when it comes to declaring a winner.

Seems easy enough, right? Well, on top of having different region tiles, the game also features a worshiper mechanic anytime you take a region tile from the center. When you do, you need to place worshipers of the same color on the surrounding region tiles, which go directly to whoever picks up that tile next! What’s even better is that you can use those worshipers to pay for tiles that you’re picking up in addition to the ones in your personal supply. 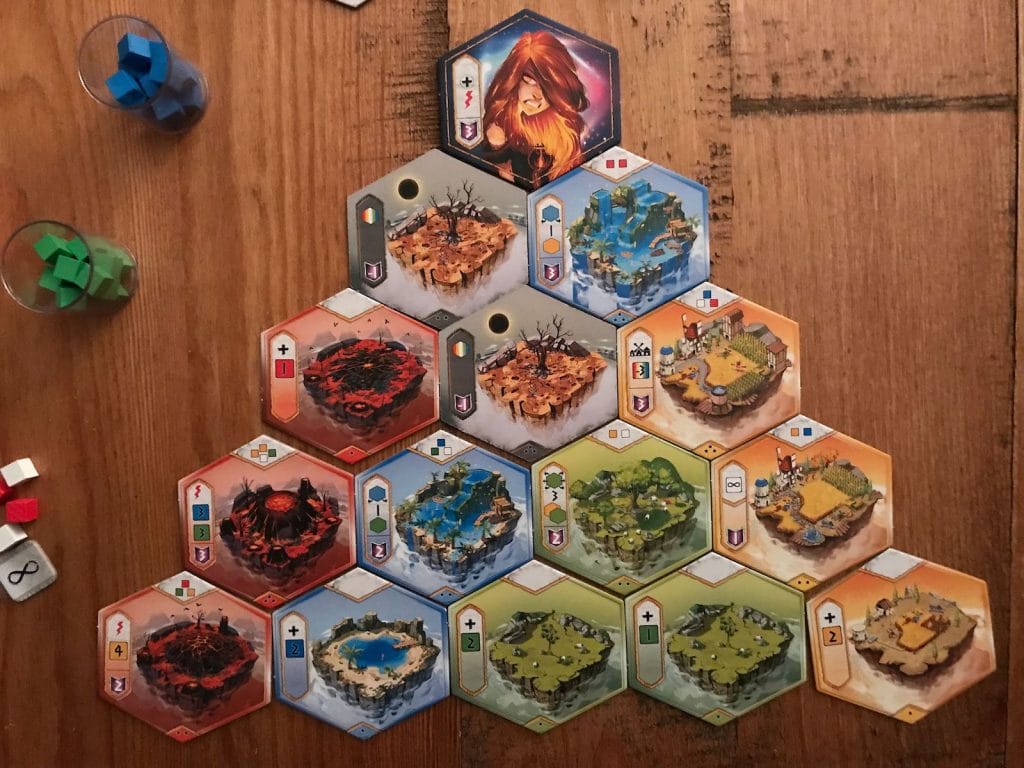 Orbis isn’t terribly complex, although there is a slight learning curve when it comes to understanding the symbols on the tiles. On our first play-through we found ourselves checking and double-checking the rulebook to make sure that we understood the meaning of everything.

Another recommendation straight from me to you – flip the rulebook over to the back and look at the top section. I’ll give you a minute. Got it? It’s a section of rules that are frequently forgotten! Honestly, I wish that had been closer to the front of the booklet because I didn’t even realize it was there when we first sat down to play. I’m not the kind of person who is going to start reading the back of a book expecting to have a grand revelation about the pages within.

The game plays quickly and it’s relatively quick to learn and teach, which is always a plus when I’m trying to spread the board gaming hobby to others. A couple things in the rulebook could be cinched up to be more intuitive, but once you’ve played a few times things make more sense.

If there’s one minor gripe I have about Orbis is that it would benefit greatly from expansions. More gods and region types would really help open up this game and enhance its replayability. From my experience, the game progresses in a similar way with each play, and there are definitely certain region tiles that feel much more powerful than the rest. For example, there are five tiles that mean you don’t have to dish out for a certain color of worshiper when paying for a region tile. Over time, that benefit is HUGE.

The nice thing is that if we’re keeping with the Greek-esque theme, the entire pantheon of deities can give more than enough inspiration for additional tiles. Sure, we’ve already got a Hades lookalike, but what about Dionysus or Hephaestus? In fact, the generic naming of the god tiles opens up even more doors! Just a quick search on the ol’ interwebs for ‘god domains’ will yield oodles of results that could be used for additional tiles.

As far as region tiles goes, the world is much more diverse than farms, villages, forests, volcanoes, irrigation, and temples. What about universities, archipelagos, or arenas? Not only could we dip our toes into the natural sphere, but there is already a precedent set for civilization-minded tiles. I’m thinking something in the realm like Age of Empires or any of the Civilization games where the region tiles start out relatively primitive and get more powerful as the game progresses.

This progression is already built in to the game with the star system that they use to denote the bottoms of the tiles, so it would be a seamless addition. Perhaps the main change that would need to be made is to limit the number of tiles for each ‘stage’ of the game so that the players can tangibly feel the power of the their universe getting stronger.

One thing that I’ll add is that since this game relies heavily on color, it likely might not be as accessible for people with color blindness. I would recommend taking a look at photos of the game to make that determination, paying particular attention to the region tile costs, denoted by the tiny, colored squares at the top of the region tiles.

When you boil it all down, Orbis is a neat game that borrows mechanics but still retains its own unique flair and concept. With some additional expansions, I think that this game could be elevated onto one of those sleek Greek columns and be even better. And if you’re like me and have a hankering for mythology, you’re bound to love the theme. In fact, it can sit perfectly on your shelf next to Santorini. No coursework required.

Adaptation vs Abandonment: The Story of Montolio Debrouchee, the Blind Ranger

Board Game Review: Appease the Forever King with Charterstone

Board Game Review: Appease the Forever King with…

Call to Adventure: Name of the Wind Board game Expansion…