Adaptation vs Abandonment: The Story of Montolio Debrouchee, the Blind Ranger

Imagine for a moment you’re playing a mid- to high-level Ranger in a 5e campaign and you have a really bad encounter with a Red Dragon.  You survived the 18d6 of fire damage, but your face was quite literally melted off. 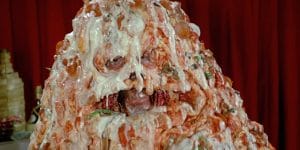 Now that you look like Pizza the Hut from Spaceballs, you worry that your Charisma modifier will now feature a (-) in front of it.  It was your dump stat anyway, right?  No worries, though; the Clerics were able to fix all that.  What the Clerics weren’t able to restore…was your eyesight.

A blind Ranger?!  Time to retire that PC and either whip out the backup or whip up a fresh character.  I mean, how’s he gonna do all the Ranger things that Rangers do?

Montolio Debrouchee, whose story you just read, wondered the same.  He stopped adventuring and basically retreated into the woods in despair to live out the rest of his days in solitude and darkness.  But his finely tuned survival instincts were not so easily muted as was his sight.  He could not see, but he could adapt.

In time, he was able to fully compensate for his disability.  He foraged, he hunted, and he defended himself; all with such aplomb and skill that the neighboring tribe of orcs knew to keep their distance or lose their lives.

One of Montolio’s neatest tricks came by way of his relationship with the owl, Hooter.  In battle, Hooter would swoop down on an enemy and give a short and sharp cry.  It was towards this sound the blind but honed bowman would release his black feathered arrows with deadly precision.

Does This Translate From Novel to Game? 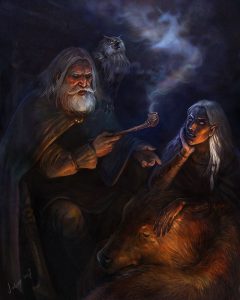 Montolio’s tale is told within the pages of Sojourn, the second (chronologically, at least) novel in the Legend of Drizzt series from R.A. Salvatore.  And I gotta say:  I love the idea of the character staying “relevant” after sustaining an injury that significantly affects his utility.  I’ve written before about players considering adaptation instead of abandonment when bad things happen to their PCs.  Sure, a shiny new character is only a few d6 rolls away…But in the Forgotten Realms, these characters we build are more than numbers on a sheet of paper.  They are extant.  We give them history with our pencils before we try to write their futures with our d20s, after all.

So if your PC’s utility (usually in combat) is threatened, before you crumble up that character sheet, give a little thought to adaptation because adaptation is neat!  Montolio is a fascinating character not because he had his face melted off, but because he persisted afterwards.  A blind ranger who uses an owl in combat to audibly locate his enemies is flippin’ cool…

But does it translate from novelty in a book to mechanics in an actual campaign?

I think it ultimately comes down to DM/GM fiat.  Some infirmities or handicaps just require an alternative play style – like the Rogue in my Strahd campaign who lost a hand.  He just can’t shoot his bow right now.  He’s figuring things out as he goes.

Others, like Montolio’s blindness, require a bit more careful thought.  By the time we meet Montolio in Sojourn, he’s been blind for 6 years.  It’s not like he was blinded in one combat and using Hooter (his owl companion) as a homing beacon like a pro in the next.  So maybe your character goes to live off-screen for a while and then makes an amazing comeback later!  It doesn’t even have to be in the same campaign!  Imagine the shock and cool factor of reintroducing a character your tablemates are familiar with but thought lost and abandoned because of the damage done last time they saw her.  She’s back, still very much disabled in whatever way…but better than ever.

You’ll need to work with your DM/GM on this, of course. 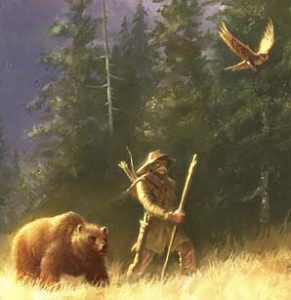 Obviously R.A. Salvatore took some creative liberties with Montolio for the sake of a novel’s narrative, but you can do the same (within reason).  Get creative!  Creativity is a key element to the tabletop RPGs that we love.  Explore it without straight up exploiting the game’s rules, and you’ll be well on your way to weaving a tale any Bard would love to sing about.

Consider It For The Narrative

Look, I’m not saying you should 100% and always keep a character around who gets crippled somehow.  I am all for you enjoying the game, and if this process hinders that enjoyment – DITCH IT.

But think about all the cool and even inspirational stories we have in our reality from people adapting to disadvantages:  Double amputees competing in track events, paraplegics completing OCRs (obstacle course races), etc.  We’ve got to be careful we’re not participating in ableism in our fantasy worlds.

All I’m suggesting is that the next time you’ve got a character who gets disabled somehow and you don’t have a Wish spell handy, instead of telling the table why your character’s story is over…consider figuring out how it is able to continue.

Build a Stunning Universe with Orbis