Back in 2020, while everyone was quarantining and working from home, Jamey Stegmaier began prototyping a new roll and write game via Facebook Live. You could tune in, play along, and offer suggestions. Over time the game changed and evolved, eventually becoming the newest Stonemaier Games release, Rolling Realms!

Priced in at $20, you’re really getting two games in one box with Rolling Realms! There’s the ‘traditional’ roll & write experience, which is the game that was conceived during the pandemic. You also get a golf-course styled solo mode, which offers extra challenges and criteria to move onto the next hole.

We’ll talk about both versions as we kick off this Rolling Realms review below!

First, let’s talk about the base gameplay of Rolling Realms and how the mechanics work. Once you have your foundation set, the solo mode plays using the same mechanics with a few adjustments.

The game is played over 3 Rounds. Each round, players will all use the same 3 Realms cards (meaning that over the course of the game, two Realms will not be used). One player rolls the two dice and everyone uses those two numbers to fill in spaces on their Realm cards. This constitutes a turn within the round.

After 9 turns have passed, the round is over. Players will score up their Realms and mark the value on their score card before heading to the next round. Whoever has the top score after the 3 rounds is the winner!

The Realm cards make the gameplay different each time that you play it. Certain Realms play really well together, while others may not. Each player has to determine what strategy might work well for any given Realm trio and then hope the dice align with that strategy.

As you fill in spaces, you’ll periodically earn resources like coins, hearts, and pumpkins. In turn, you can spend these to gain powerful effects like changing the number of a die, getting a copy of a die, or getting a die of a specific value.

All of the Realms are representative of current Stonemaier Games titles, like Wingspan and Red Rising. What’s even better is that the objectives on each Realm also loosely line up mechanically with what those games are about. For example, the Viticulture card has you marking off grapes and the combining marked grapes for wine!

The solo golf mode consists of pre-selected trios of Realms to use. Usually it’s because they work well together, but most of the scenarios come with an extra stipulation like all Realms having exactly 7 spaces filled in (Hole #5). If you don’t pass a hole in one round, you get extra starting resources for each subsequent attempt it takes you to pass.

Staking Our C.L.A.I.M. on Rolling Realms 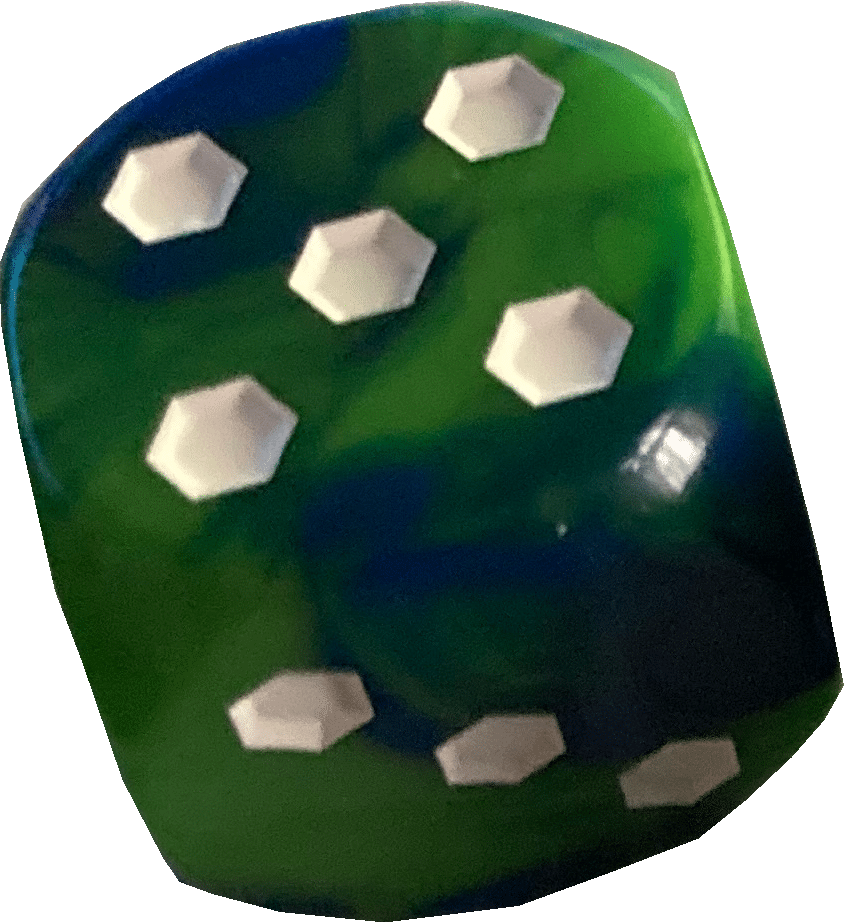 A constant issue with roll & write games is that the scoresheets are finite. It almost makes me NOT want to play because I don’t want those scoresheets to run out. Sure, you can usually find a printable version to replenish your stock, but that’s an extra step that I don’t like having to remember.

With Rolling Realms, everything is marked using dry-erase markers. Not only is this better for my ancient printer, but it’s also more globally sustainable for a roll & write game, which is great! It’s also easy to erase if you make mistakes. This is made easier with the tiny eraser included for every player.

The dice resemble melted globes, swirled with green and blue. They’re also jumbo-sized, so the whole table will be able to see the result of what’s rolled each turn.

Overall, the components are limited (because this is a roll & write game), but everything still has that trademark Stonemaier Games finish to it. Even the rulebook exhibits that high-quality linen texture that has been present in the last few Stonemaier releases. Everything is polished.

When playing Rolling Realms, it’s more like you’re playing three mini games, each with their own strategy. Since the setup is variable, you’ll want to spend a minute thinking about how you want to tackle each Round before you start filling in numbers willy nilly.

Again, as this is a roll & write game, you’ll need to react to the dice results to place them in the best position. I’m appreciative of the fact that everyone at the table is using the results of the same roll. It’s a mechanic that I built into my roll & write game, Hubble, because it puts everyone on an equal playing field. With everyone using the same pool of dice and same Realms, who can make the best placements overall?

Your strategy is really put to the test when you play the solitaire mode. Some of the scenarios are blisteringly difficult, and you really need to consider the requirements before starting. In Hole #5, for example, that means planning exactly how many usages of resources you can use in order to fill in 7 spaces, keeping in mind how many you fill in naturally via rolls.

Proper and timely usage of resources is very important in Rolling Realms. You don’t get to carry them over from one round to the next, so earning them early and often is the name of the game. Well, it’s actually Rolling Realms, which you should know at this point in the review!

Rolling Realms has a simple aesthetic, but that’s not to say it isn’t good. I love minimalist styles with clean whitespace that allows space for the mind to breathe. And that’s exactly what we get here.

The iconography is easy to understand and you’re not going to confuse pumpkins, say, with coins. I also appreciate the homages to the various Stonemaier titles within the Realms cards, like having an hourglass for Pendulum and grids from Tapestry. This makes the game more compelling than just always crossing out a box or filling in a number.

The only thing I’m torn about is the coloring on the dice. I understand that it’s supposed to resemble the Earth, but I’ve been waffling back and forth on whether I like it or not. Swirling patterns don’t mesh well with the contemporary style everywhere else in the game. I’d almost have rather had a muted rainbow coloring on the dice to mirror the awesome art on the cover of the box.

So let’s talk about who Rolling Realms is for. As I mentioned above, this game wasn’t originally part of the Stonemaier release schedule. It’s more of a bonus title that organically came together through extensive playtesting by Stonemaier fans. If you’re a Stonemaier Games lover, then this is a really affordable fan-service game. And I say that with no negativity; playing a meta-level game that contains some of my favorite games is really enjoyable for me, an avid fan.

If you’re new to roll & write games, Rolling Realms would also be a good gateway game for the hobby. Some of the Realms are more complex than others, but I’d argue that they’re all accessible for new players. Having a variety of Realms also increases the replayability and makes each game more unique than the last. Presenting only three Realms at a time is also key in streamlining the teaching process and starting play more quickly.

Lastly, Rolling Realms is great for solo gamers because of the solitaire minigolf mode. My one caveat is that playing a single hole can be akin to playing an entire game of multiplayer Rolling Realms if it takes you three tries to complete it. In that sense, the solitaire mode isn’t intended to be played in a single sitting. Even if you are REALLY good and lucky, it would be equivalent of playing six consecutive games of Rolling Realms back-to-back. My advice is to take your time and play over multiple sessions so as not to get burned out.

If you’re looking for a lot of player interaction, you’re not going to find it here. Players will be focused on their individual boards and placements without worrying about what others are doing. The only interaction would be tied to the luckiness of the dice thrower. That’s not necessarily a bad thing, but that’s why Rolling Realms is more of a game that requires conversation and social interaction while you play.

As with other roll & write games, Rolling Realms creates the tension with every dice throw. As you near the end of a Round, the tension heightens because you only have so many places left to accommodate certain values. Therefore, you get this natural ebb and flow as you your breathing room constricts and widens as the game goes on.

You gets those little hits of dopamine when you complete rows or columns, earning resources. Sometimes you’ll find yourself prioritizing that in order to get enough resources to get an extra die value (which is almost always worth it). The more dice you place, the better chance you have at a higher score!

Rolling Realms is a relatively casual game that you can enjoy while having conversation with friends. You’ll be using your brain to quickly estimate probabilities and outcomes, but for the most part you’ll just be rolling, writing, and chatting. This even applies to the solitaire mode – I won’t judge!

The theme of the various Realms shines through in their layout and rules, which also elevates the game beyond a standard, non-thematic roll & write game. Having played all of the games depicted, I can’t help but smile when I see the nods at the original games shining through. I can only hope that future titles will be available as expansion sets so that every Stonemaier game can be showcased in Rolling Realms.

Rolling Realms: The Realm of Possibilities

Having followed Rolling Realms through its development and iterations, I wasn’t surprised that I enjoyed the end result. Despite what I’ve heard around the industry, roll & write games remain prevalent and people continue to enjoy playing them! And the solitaire minigolf mode is a wonderful addition that ensures I can get in a quick round of Rolling Realms anytime.

Clocking in at an MSRP of $20, Rolling Realms features an attractive price point supported by simple gameplay. It’s easy to teach, quick to play, and brings sustainability to the roll & write genre. It’s definitely going to find its way into my duffel bag on my next camping trip, as it will be perfect for those tented gaming sessions.

For all of the above reasons, Rolling Realms gets the highest accolade that we can give board games here at Nerds on Earth: the Seal of Awesomeness! It’s a prestigious award that can be earned solely via enjoyment of a game. This was definitely accomplished here.

You can pick up a copy of Rolling Realms through Stonemaier Games directly, or look for it on the shelves of your Friendly Local Game Store (FLGS)!

Disclosure: Stonemaier Games provided Nerds on Earth with a copy of Rolling Realms in exchange for an honest review.