Board Game Review: Stack that City in Akropolis by Gigamic

The Akropolis board game, published by Gigamic,, takes us to ancient Greece to build the best city under the Helios’ watchful eye!

Akropolis is designed by Jules Messaud. Players will be drafting tiles and placing them into their cities. But we wouldn’t just stop at the ground floor, would we? Stack those tiles on top of other tiles to really impress and cast a shadow on the competition.

What do we think about Akropolis? Let’s check it out – no chisel or hammer required!

In Akropolis, players each work on their own city, drafting tiles from a communal pool. Each tile is a combined set of three hexagonal sections, each depicting one of the city regions.

Players place the tiles neighboring their existing ones, which gradually creates their very own city. The twist, however, is that tiles can also be placed on top of existing tiles, assuming that you can fully cover three hexes spanning at least two tiles. As long as you can fulfill those requirements, you can keep stacking to your heart’s content!

At this point you might be asking, ”Abram. Why would I care to build my city towards the clouds? Why can’t I just stretch this kingdom across the table until I’ve covered this rich mahogany in full?”

Only the uncovered hexes score at the end of the game. Therefore, every time that you build on a subsequent layer, you are actually covering up potential points. The tradeoff is that hexes on high levels are worth more points too. So, it might be in your best interest to cover up tiles that aren’t worth as many points in favor of ones that will score big.

But do not think for a second that you can just waltz through the game drafting tiles willy-nilly. You only score points on tiles where you have at least one uncovered Plaza matching them. Additionally, the more Plazas you have, the more points that you will score for their corresponding District.

Here’s a rundown of the different hex colors:

Quarries serve a unique purpose because every time you cover one up you gain a wooden Stone cube. You use Stone to pay for tiles that you are drafting, and each leftover Stone at the end of the game is good for its own juicy point.

Whoever has the most points when only one tile remains wins the game!

Staking Our C.L.A.I.M. on Akropolis! 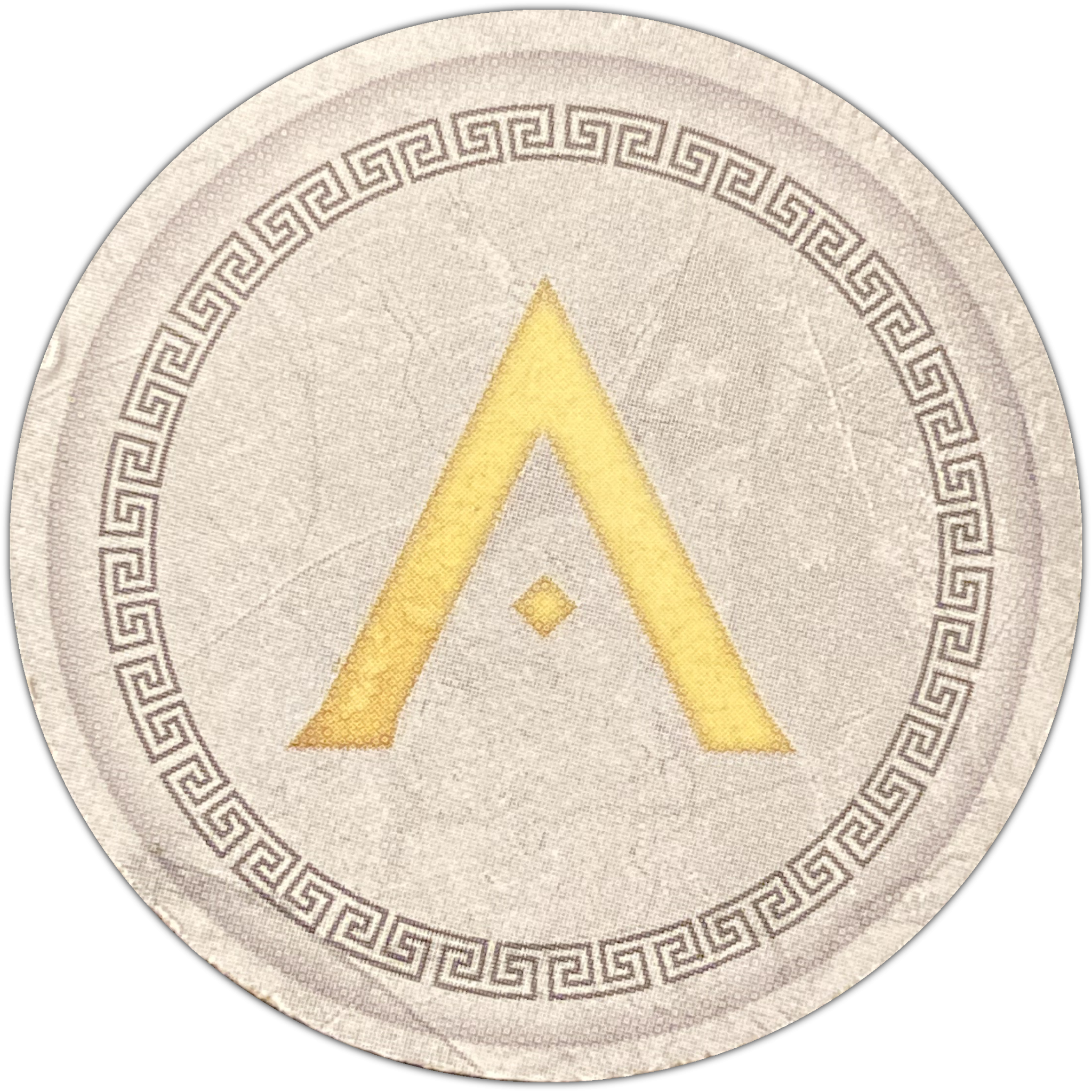 Wow – I love how thick these Akropolis tiles are! You may be used to a certain ”standard” thickness for your cardboard chits and chats, and these tiles break that mold. It’s almost like these tiles could serve as a solid, immovable foundation for an expansion to any number of major metropolitan cities. Just add some concrete mix, a little bit of water, and set it in the mold.

These tiles are the clear and obvious stars of the game, and the only major component besides the wooden Stone cubes. Those are your average painted wooden cube, which is a nice upgrade over a thin cardboard token or something like that.

These are definitely some of the best tiles I’ve played with, so Akropolis gets high marks for their functional and durable components.

The strategy of Akropolis is a delicate balancing act that would leave the most prolific acrobats pausing in anxious assessment. I have seen games where people focus on a horizontal strategy and win, while other times keeping your city contained and going vertical ends up being the best. I mentioned the sacrifice you make by building upwards, but it usually seems like at least going up a to the second level is worth it. Usually I will try to cluster my Quarries so that I’m not giving up points, while also ensuring that I have a stockpile of Stone to take the most profitable tiles.

But Akropolis also has a second balancing act in the sense that you need to prioritize those Plaza hexes. It reminds me a lot of games like Sobek: 2 Players or Kingdomino, where all tiles aren’t created equal. You need both types of hexes in your city for it to thrive.

Once you have the base game down, you can also play with some advanced rules variants. These expand the scoring rules for hexes to grant additional points if you can satisfy the secondary requirement. They make the game more complex, as it doubles the number of inputs and considerations you need to make as a player.

Any time you’re dealing with an abstract game like this, aesthetics become even more important to establishing the bedrock foundation of a prominent table presence. A STONE foundation, even? Yeah this ain’t my first time around the review-pun block.

In Akropolis there are a couple key factors that connect the city-building theme to the components. For one, you are actually placing these chunky hex tiles into a 3-dimensional space. Combine that with the bright colors contrasting against the light gray background, and you get an architectural juxtaposition that would make any city planner jealous. It still marvels me how those colors pop; I’m not adjusting any contrast sliders for these pics.

And honestly, Akropolis has everything we need for an abstract. The colors and iconography are identifiable without any trouble, although I suspect that color blindness could be a deterrent for accessibility. Even though the different color types do have unique building designs, there’s a veritable sea of hexes to assess out in front of me and I’m not confident that I could quickly distinguish my personal gamestate just by disseminating the lines that make up the buildings and columns.

The Akropolis board game features a simple tile drafting/market mechanic that experienced gamers will understand. It’s reminiscent of a similar market dynamic that you’d find in Century Spice Road or Small World, except that the Stone cost just goes to the bank. At the same time, it’s easy enough that new gamers shouldn’t have any trouble learning the game and hitting the ground running.

I thought that the tile-picking would take slightly longer than other market-based games because you’re evaluating your entire spread of hex tiles as well as the three hexes on each tile when you’re making a decision on what to take. That’s a lot of inputs into the brainbox, especially when you factor in the ability to rotate tiles AND stack tiles on top of each other.

Surprisingly, that wasn’t the case at all. As with most drafting games that score in a variety of ways, you can’t really focus on scoring high on EVERYTHING; you’re going to have to let some of the colors fall to the wayside. This drastically speeds up the analysis time because you can quickly tell which tiles are cover-able in your city, as well as which tiles you can totally avoid.

What I also really like is that the stacking mechanic really means that you can lean super hard into focusing on a specific color or two. Early game blunders won’t ruin your game at all, because you’ll be able to cover those up and nobody is the wiser! It also gives you the flexibility to shift gears and pivot once you start seeing which colors are dominant in your city.

And when you’ve mastered the base game, the variants re-add that complexity so that people who like crunching numbers can get really gritty with their strategy. It basically creates a situation where you have multiple ‘difficulty’ levels within the same box, which makes it an ideal staple for your shelf.

As you’re building your city in the Akropolis board game, you can begin to see how these abstract mechanics actually connect really well to the theme. For example, I’m reminded about cities and buildings that were gradually built over the tops of their own ruins. As you’re building over your own city, you are replacing bad history and outdated Blockbusters with a fresh coat of paint and modern opportunities. When you build on top of quarries, you’ve tapped out the resources supply in that section of the city where it’s no longer needed. Repurposed and recycled.

The theme also comes in a bit more strongly with the variant scoring as well. For example, you can earn more points if you build a Plaza next to a Market district. If you had a roaring and upscale downtown scene, of course that’s going to attract consumers willing to drop some coin in the nearby market. Similarly, if your Barracks are spaced out more around the border of your city, those city guards will have a wider coverage when it comes to spotting would-be attackers.

I love building up as much as possible because it makes me feel like I’ve created my own personal Gondor looking down upon the plains. And when someone takes the tile you wanted from the market, it’s like they ended up out-bidding you on a contract for a new city development. Sure, there’s a certain amount of imagination that needs to be applied to make these thematic connections, but Akropolis literally gives you the pieces to build a city the way you want to build it.

You can check out Akropolis at Gen Con this year! At the time of writing this, there are still some open slots for Akropolis Events at Gen Con, so get your tickets while you still can. Early copies will be available for sale at the Hachette booth #2109, where it will also be available for demos. Location for the booth is marked below.

We were able to take a look at Akropolis at Origins, where it made several best of lists:

Akropolis: How Low High Can You Go?

Placing tiles in two dimensions is fun, but placing tiles in three dimensions is so much better! Go wide, go tall, make little spires and towers in your city, or leave plenty of open space for your parks to be lakeside. Akropolis appears simple on the outside, but offers plenty of bite if you want to add a little crunch to your game night.

Because of how STACKED Akropolis is, we’re awarding Akropolis with our very own Nerds on Earth Seal of Awesomeness award! It’s an engaging game of building up without the threat of players trying to tear you down. There’s lots to love here in this box of tiles.

Akropolis officially releases on August 24th for $30, which is a price decrease from the original announcement of $40! If you aren’t heading to Gen Con, Preorders are open now through Hachette in the USA, or you can check out Akropolis at your FLGS.

Disclaimer: Nerds on Earth was provided a copy of Akropolis from Hachette BoardGames in exchange for an honest review.