If I Was in Charge: My Picks for the Best X-Men Team Ever

By Michael Adkins On May 10, 2014 Last updated Jun 7, 2017
Share TwitterReddItPinterestFacebookEmailPrint

My friend Jason Sansbury and I have always built lists together. Usually a David Letterman Top 10-esque lists with varying and often far-fetched objectives. One of my favorites ever was the “Top 10 Least Appropriate Songs to Hear While Holding on a Suicide Hotline.” We had a tie for #1 between Sheryl Crow’s “The First Cut is the Deepest” and Van Halen’s “Jump.”

But in our defense, the list is meant to be preventative; i.e. we are suggesting that they should NEVER be heard on a Suicide Hotline!

A few years ago, Jason and I had a long drive ahead of us and not much in the way of entertainment besides list building and geeky debates. I was scrolling through the notes on my phone today and found one of the results of that particular drive: our independent submissions for the Best Ever X-Men Team.

The RULE was simple: Each member had to have served as an official member of the X-Men or another mutant team from within the Marvel Universe (X-Force, X-Factor, New Mutants, etc). The duration of their stay was not weighted.

Read on to find out who I think are the best X-men ever, and why.

My Picks for the Best X-Men Team Ever 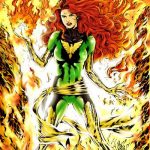 I mean, come on. She’s one of only a handful of Omega Level mutants, which Marvel defines as “a mutant possessing powers without foreseeable limits.” That’s just about all of the justification one needs for Phoenix. She is also a telepath, and a strong one at that with few, if any, equals. She’d be a distance fighter; she has no need to get close as she could incapacitate (or completely neutralize) most with her mind from afar or use her telekinesis offensively.

Red this if you think that Marvel should keep Jean Grey dead. 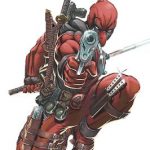 Deadpool has always been one of my favorites. I loved him before it was “cool.” Really, before he was “cool.” Anyone that knows me would have seen this one coming (assuming they knew that he has, in fact, donned an X-Man uniform on a couple of occasions, or that he has even recently been a member of X-Force).

He has even greater regenerative capabilities than Wolverine, he is highly resistant to telepathy (because he’s crazy due to his constantly regenerating and therefore unstable cells/brain), and he’s rated by Marvel as one the most skilled combatants in their Universe. And despite his craziness, his tactical understandings are extremely excellent.

He’s nearly unkillable. If he does nothing but play the role of cannon fodder (and he would accomplish more than this), he would be worth having aboard.

Another big reason he’s on my team: He is not above killing. You need someone who is willing to get their hands dirty, and Deadpool is that guy on my team. He also has some teleportation capabilities. He can serve well from a distance (expert with projectile weapons) or up close.

I’m not a fan of Cyclops, and I needed a master tactician and accomplished leader.

If we get to have our picks from their peaks, Cable would also possess telepathic and telekinetic powers to a very high degree, although I think he loses some of that in some of the more recent stuff that I have not read.

He’s also been known to travel through time which could prove nifty.

His techno-organic arm and eye enhance his capabilities, too: strength, vision, added ability to interface with other technology (think hacking and such). He’s also the user of the biggest friggin’ guns in the Marvel U. Mostly thanks to Rob Liefeld’s propensity to over-exaggerate. I’d take him leading from home or on the front lines.

If you are wondering what Cable has in all those pouches, read this. 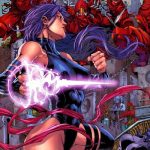 Another strong telepath, but she leverages it in a completely different way. Psylocke is more of a close quarters combatant that uses her telepathic abilities to manifest a katana that can cut through just about anything. She can read, anticipate, and therefore avoid or counter her opponents’ next move, while projecting stunning and even potentially fatal psychic blasts.

She even manages once to pierce Juggernaut’s helmet with her telepathy, which is kind of a big deal given that Juggs wears said helmet to make himself (supposedly) immune from mental assaults.

Did I mention she’s also a master ninja? Her mix of martial arts prowess, stealth, and the additional cloaking provided by her ability to mask her presence in the minds of threats makes her an ideal scout and assassin, but she’d do just as well in a crowd of baddies or as a supporting member of an assault on a single opponent. 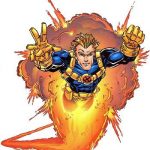 This guy is as much for defense as he is for offense. He’s able to manipulate some kind of force in some pretty useful ways: He can project it around himself as an impenetrable personal force field, surround allies with said field, entrap foes within said field, and it allows him to fly. The field absorbs kinetic energy which can then be redirected at his attacker(s) through blasts or punches and deflects/neutralizes all other forms of attack.

All this coupled with its indestructibility, makes him a man-sized, unstoppable projectile.

Cannonball is also suspected of being immortal, although the comics I’ve got go back and forth on the issue. They confirm it by killing him and then having him recover. And I don’t mean that he was brought back from the dead by some silly plot device, but in one case he recovers from a mortal wound in minutes. But then they’ll go and deny it with dialogue. Nay-saying words don’t undo his resurrections, though. 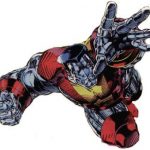 As far as I know, he doesn’t have any additional attributes or abilities, but he doesn’t need them for this squad. He’s the muscle, and he’s the perfect choice for the job. He’s the guy you look at and go, “Smash,” then watch him work. Unleashed, he’s more than a force to be reckoned with, but he has also proven valuable as a member of coordinated team efforts. 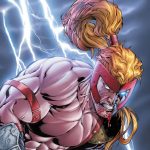 He grew up battling gladiator style which means he’s only alive because he’s never lost.

He has a high sense of honor too, so he’d be an excellent moral compass. He’d be the one to slice off Deadpool’s head were he to step too far out of line, and he would do it without hesitating. (Side Note: Slicing off Deadpool’s head is merely a temporary disciplinary measure, as he would recover).