Fellow Nerds, Jason here. I feel like we can’t just let the recent Marvel Cinematic Universe announcement go by without talking about it some.

First so everyone is up to speed, Marvel announced the next wave of movies that had previously be unannounced.  Here is the upcoming slate of films: 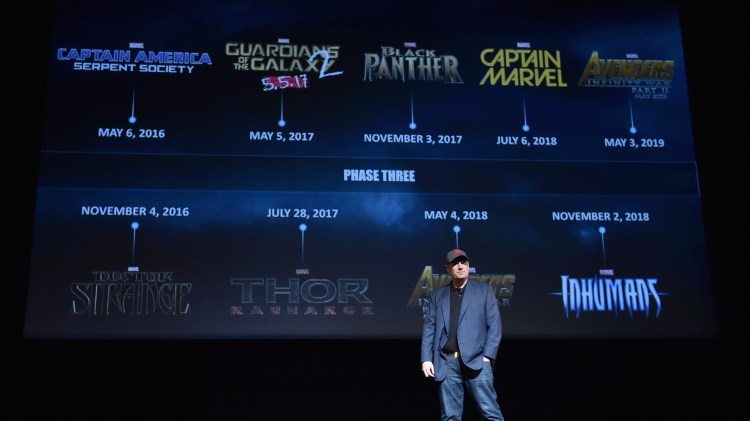 So there are 9 movies with a lot of things to talk about.  Some of my thoughts:

This is a really interesting slate of new movies.  It feels like Guardians of the Galaxy and its massive success has given Marvel a willingness even more so to take risks.  For instance, Doctor Strange is a weird character that hasn’t even ever been able to really sustain his own comic title,  yet he is getting a movie.

And the Benedict Cumberbatch casting that was announced this week I am completely “meh” on.

Civil War is going to need some re-writes from the comics.  Drastically.  How do you think they may do it?

The new Thor is promising the return of Loki, who is clearly the unexpected superstar coming out of movies wave 1 and 2.

I want to see who they get to direct Black Panther.  There is a challenge there to have the film come out well.  I don’t want to say that the character stems out of a racist past but he was clearly done in a time and at a point where to do the same story now is going to seem odd at best.

Avengers Infinity War is clearly the Guardians, Avengers combo film we all want.  The issue will be what do they do with that moving forward.

FINALLY, someone is going to man-up and make an awesome superhero story with a woman main character.  Carol Danvers Captain Marvel is an awesome choice for them, since they lack the rights to use any of the X-verse characters at the moment and I am pumped for her to be on the big screen.  Who should they cast for it? 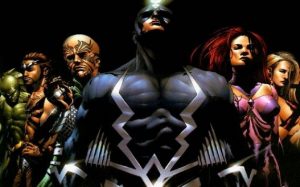 And Inhumans?  What?  I mean, their king can’t speak or he rips the universe a new one.  This is going to be a very interesting thing to see.  Some have speculated that they are going to backend Inhumans as a different way to tell the X-men story.  (People exposed to Terrigen Mists get powers if they have the unlocked gene in their DNA.  They seem to be telegraphing that in some recent comics, esp. the early issues of Ms. Marvel.) And how do they cast Lockjaw?

What other thoughts do you guys have?

I agree about Guardians of the Galaxy being a sort of linchpin for Phase 3.  If it had bombed, I don’t see how half of this phase happens.  In part because the Guardians are meant to be in on the action of at least three of the nine titles (assuming they’re major players in the Infinity War movies which is not a stretch by any means), and also due in part to a sort of gun-shyness that might have been fostered around the introduction of some of the more “fringe” (at least as far as the general public is concerned) comic characters such as Dr. Strange and The Inhumans.  That sinks over half of Phase 3 conceptually!

The success of Guardians of the Galaxy does buy Marvel some trust from tentative, uninformed (when it comes to the comic source material) cinema goers, but it by no means grants them license to experiment poorly, of course.  If I’m Marvel, I’m holding my efforts towards Dr. Strange, Captain Marvel, and Black Panther to the same standards of quality that I do The Avengers.  They don’t play second fiddle.  They aren’t viewed as second-rate attempts or auxiliary to the “main” films; merely placating placeholders to fill the gaps of time between their “biggies.”

I particularly think Marvel has to achieve this with Black Panther and Captain Marvel as those two could easily be seen as their attempts at diversity for diversity’s sake, and they need to distance themselves from that perception as best they can.  If Marvel manages equal excellence with all nine films, they truly accomplish the mighty!  And holy crap what an incredible four years of movies that would make.

I’m most excited about Civil War, myself – where those who have for years now been established as heroes become villains depending on which side of the Superhuman Registration Act you side with.  The policing element of the Act in the comics is interesting on a philosophical level, but really gets exciting when hero squares off against hero in the field.  That, my friends, will make for some good cinema.  Plus, let’s be honest:  It’s the realization of every nerdy conversation that ever began with the words “So who do you think would win in a fight…?”

Casting wise, I am most curious to see who they cast as Captain Marvel.  The leading, solo female superhero thing has been done, but it hasnt exactly been done well (looking at you, Elektra).  Being a big fan of Battlestar Galactica, I would have loved to see Katee Sackhoff in that role; a position that is far from unique on the internet.  Come on, Marvel…How can so many nerds be wrong?! (An oversimplification of what goes into a hiring decision, but I stand by it)  The rumor mill abounds with options.  Some I like (Yvonne Strahovski, Emily Blunt, even Jessica Biel).  Others I do not (Emma Stone and Jennifer Lawrence, both of whom I like just fine, but not for this role).

I could kick myself for spending my 4 billion dollars on a Bernie Madoff pitch for Zhou Zhou Pets in 2009. Instead, I could’ve used that 4 billion to buy Marvel like Disney did, because boy howdy (Yes, I’m embarrassed I used that phrase. No, I’m not embarrassed enough to change it.) was it a fantastic investment.

In 5 years Disney has made their 4 billion dollars back and then some.  The numbers:

You can check out the rest on Box Office Mojo, but the point is that they are printing money.

I bring this up to illustrate what a high bar has been set, but I say that not to cast doubt and suggest that one mistake and the empire crumbles. I don’t believe that. Iron Man 2 was a mediocre movie and it didn’t hurt Iron Man 3, which turned out to be the most profitable of the bunch.

I illustrate the high bar to also illustrate and highlight just how talented the production team of Marvel is. They are Omega level mutants who have the power to alter the fabric of space and time. Phoenix, Galactus, and the Beyonder themselves couldn’t provide better leadership at the helm of Marvel’s Movie division right now.

This gives me hope that a new, untested franchise like Black Panther, Captain Marvel, or Doctor Strange won’t simply be a script written for a generic hero. I think they’ll do their best to really hit the beats of what makes that particular character tick, while also capturing their unique part of the Marvel Universe.

My only point of concern is the fact that the 3rd Avengers movie is split into two. I don’t like this. A great reviewer once said that “what the best storytelling needs isn’t volume but rather editing.”  The 3rd Avengers movie split in two does signal hubris to me, which makes me nervous. When did Marvel sign on Peter Jackson to take over the Avengers franchise and when do they let him go?

I just love how Marvel went big with the unveiling.  They’re clearly excited about what they have planned, and that excitement is spreading like wildfire.  There is no hiding what they do between now and 2019.  Its out there, and we’re all watching.  And let’s be honest:  We’re ready to fork over the cash right now, in advance not just because we want to see the magic they’ll work, but also because they’ve proven trustworthy.

Where the internet has a lot of questions – and not unreasonably so – Marvel seems to have a lot of confidence.  Like Clave said:  Marvel is no Initiative rookie.  They know the power they have, they’re leveraging it well, and they’re attracting all of the right people to their team.  Over the next four years, we’ll find out together whether they’ll become the Juggernaut (unstoppable force) of the box office, or the Gentle (huge power, but only proven in short bursts).

One last thing. I’ve heard the concerns about Inhumans being obscure characters, and I get that. The funny thing is I might be most excited about that simply because I’m excited to see what they’ll do with these obscure characters. I’m so far under Doctor Strange’s spell or Emma Frost’s telepathy that I fully expect that Marvel will use the lesser known nature of these characters as a strength.

All I can say is ‘Make Mine Marvel.’