It’s time for our weekly review of Gotham, written as a back and forth email exchange. 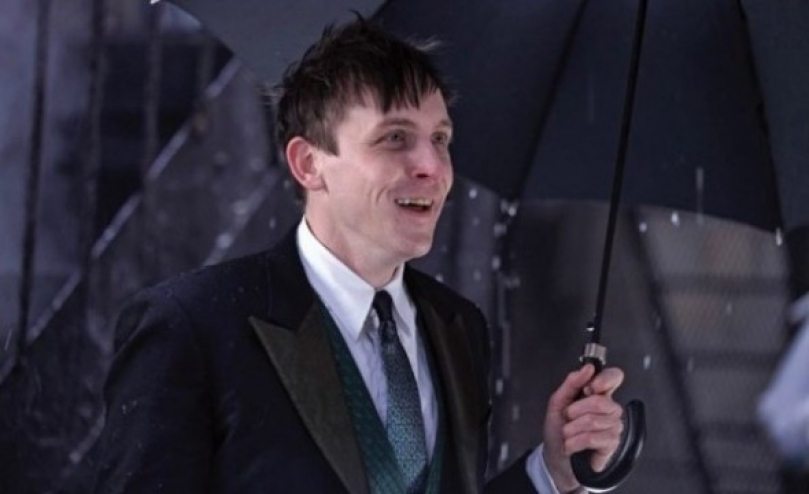 Clave,
So, let’s just get this out of the way: Penguin’s Umbrella is the best episode of Gotham so far.  They seem to really be getting their legs under them as storytellers and this episode shows it.

Harvey.  Yes, he puts on the front of the totally corrupt man.  But give him some time and some booze and he comes around to Gordon’s side once again.  I have said all along that I am pulling for the redemption of Harvey, even if it is just because I think Donal Logue is such a great actor.

Gordon gets gangster.  I like that he in the moment when he had to stand up and fight, he was perfectly willing and ready to do so.  (Pet peeve: Ankle guns.  If you are getting to the point that you need to draw an ankle gun, don’t you want more than like 6 bullets?  I want that thing to be able to fire off like 25 rounds if need be.)

Team Gordon is growing.  When the two Internal Affair cops came barrelling in to save Gordon, I cheered.  Mainly because Gordon was right from earlier: if good people are brave and stand up, others will join them.  (I am conveniently forgetting the cannon fodder of the woman officer, who needed to die so that we could know the guy is The Cutter (Which I made up) and very bad.

It was hokey and I saw it coming a mile away but the Bruce and Jim hug…it worked for me.

I know it isn’t your favorite part but what did you think about the gang war stuff?  Especially the reveal at the end on the Penguin and Falcone being partners from episode one?
Jason

I take back all the cranky stuff I said about the gang war! They sucked me in with this episode.

Falcone is much more interesting that Maroni, and the reveal that he had played the long game with Penguin was GREAT storytelling. The long-shot odds that Gordon would spare his life was a master’s touch that solidified that character, as they also illustrated the levels of subterfuge and daring the gangsters of Gotham are operating under.

You called it from the beginning with Harvey. He is a great character, and I agree much of that has to do with Donal Logue. (Which reminds me that I need to finish watching Vikings.)

The growing Gangster Gordon Gang was still no match for this week’s villain: Victor Zsasz. Even though they weren’t central to the story, I did enjoy Falcone’s newest henchman and the henchman’s two oddball henchmen. That was a touch of comic book zaniness that they’ll often add to the show.

I agree, best episode of the series to date, although I can’t agree with you on the Bruce + Gordon hug. I just couldn’t get there.

Clave,
I am looking forward to seeing where it goes from here.

I so agree on the Penguin and Gordon.  One of the most important pieces we saw this week is what exactly the Penguin’s uniqueness is his ability to read people.  It spared his life when Gordon wouldn’t kill him.  It also saved him from the corrupt gangster who was too cheap to pay his guys.  Penguin is a force, not because of power but perception.  That is a uniqueness that they can do much with before it is all over. 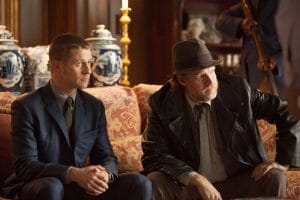 I totally thought that those muffins were going to be the deadly cannolis of this episode.  Instead, we get to keep watching as Fish’s Weapon slowly sets her trap and keeps luring Falcone in.  But when she unloads, it better be epic.

And I know, the hug was over the top.  But I bought in.

I am pumped about Team Gordon and who else jumps in to start turning the tide.  If the endgame is now Harvey going back to the dark side, I am going to be heart broken.  (And speaking of Donal Logue, you’ve watched Terriers right? I mean, it may be the best thing on Netflix.)

And it was nice to have a bad guy who did survive the end of the episode.  And, the paste-y whiteness? You start putting some red, green and purple in the right places and, well, you know…
Jason