It’s time to review this week’s Marvel’s Agents of Shield Episode: Ye Who Enter Here. After last week’s Agents of SHIELD, which led us to the gates of the mysterious city, are we ready to see peek inside?

This week’s episode of Agents of SHIELD s2e9 episode opens with Skye in a dream, running down a hall, calling out Coulson’s name.  Eventually she winds up in a room with a music box.  She sees Coulson and May abandon a baby as May calls it fruit from the poisoned tree.  When Skye touches the music box, it attacks her the way the Obelisk has attacked people this season.  Coulson wakes her from her dream and tells her to grab her gear and get ready for a debrief.

At the headquarters, Mack is playing with a remote control version of Coulson’s red convertible when Fitz finds him and asks for his help talking with Simmons. Meanwhile, Simmons is patching up Tripplet’s wound and Skye walks in as he is explaining to Simmons how crazy her dad was.  Skye agrees and she is trying to shake the vibe that something bad is about to happen. Simmons and Triplett are trying to give her a pep talk as they head to a debrief.

Coulson is explaining to everyone about the mission: Hydra has the Obelisk and someone who knows how to use it, as Mockingbird says that she and Simmons know that Doctor Whitehall was looking to create an event that would kill millions of people. (If it was dozens, they would just let the upcoming Netflix Defenders team deal with it.)  But the Obelisk is more like a key to the weapon, which is going to be found in the city that Coulson has been scratching out until recently.  They are hoping because they know where the city is that they can beat Hydra there; the city is near San Juan, Puerto Rico, which is a very convenient location for the cast and crew of a certain television show to get some vacation.

We then find Raina using her gifts on some sucker who is paying for her hunt around the city when Fake Agent May (Agent 33) returns, showing off her scar and letting Raina know that Doctor Whitehall is on to her.  As Raina is trying to get away in the city, the Koenigs help her.  (Patton Oswald is the best for these characters!)  After getting her a get away with a really fun umbrella of invisibility, Sam Koenig takes her picture, because she is going to need a lanyard.

Koenig(s) then debrief that Hydra seemed to be trying to capture Raina and not kill her.  So Coulson decides to send some help to get her, while Skye and May see that the evidence is that Ward’s brother didn’t just die in a suicide, and they both know and believe that Ward is responsible.  Coulson then breaks the group into two teams: one to get to the temple, one to go get Raina.  Skye seems shaken that she isn’t on the temple team but Coulson explains to May that he isn’t worried about her but her dear old psychopathic dad.

Simmons and Morse then have a conversation about her relationship with Fitz, with Simmons revealing that his confession of her love and his 9 day coma and brain damage. She talks about wanting her best friend back, but never as a lover. Morse then talks about how her relationships are always a roller coaster and she isn’t sure how it will end.  She encourages Simmons to come clean with Fitz before nonchalantly telling her ex-husband that he shouldn’t die on his mission when she sees him in the hall.  (His reply of “It’s Canada” was the best line of the episode.)  Simmons give Triplett a little head nod and Skye breaks protocol giving Coulson a hug as they head out.

Mack then has a conversation with Morse about whether or not she has brought Hunter in on “the other thing”, which she says to keep him unaware of.

Sam Koenig is then saved by Hunter and May drops two more Hydra agents.  Skye then rendezvouses with Billy Koenig and Raina before being attacked by Agent 33 in the hallway.  Skye has definitely learned how to be a better agent, holding her own as Billy and Raina are able to get away.  Eventually Agent 33 gets the upperhand, after Skye hesitates in the fight and offers SHIELD’s help for her.  Hunter is able to come in and save the day but is a bit freaked out by May’s Evil Twin.

In Puerto Rico, Morse and Coulson talk about having been here before and their favorite restaurants and Coulson discovers that he isn’t a hat guy.  They then talk about whether they are really there to destroy the weapon or recover it.  Coulson talks about the reason he is here is to save people. Fitz and Simmons are there to figure out the way to bury the city with minimal damage and Morse is there to be his shotgun in case the scalpel doesn’t work.

Mack then leaves Fitz and Simmons alone in the Quinjet.  Simmons is in the middle of explaining her departure as an undercover agent when Fitz announces that he is leaving, giving Simmons the head of the lab duties.  Fitz says he can work for her but not with her.  She is clearly torn up about it.

Morse and Coulson do some location scouting on the city entrances.

Skye and Raina talk about how they used her as bait and Skye lets Raina know that Hydra has the Obelisk.  Raina reveals that she can hold the Obelisk.  When Skye questions her, Raina reveals that when she holds it, it guides her.  Raina says that Skye’s dad is convinced she can touch it too.  Raina says that is their destiny and then runs towards the Hydra agents but May rolls up in a black van and runs into them, loading up everyone in the van. Agent 33 then reports to Whitehall that they have lost Raina but that they may can track her because of a device SHIELD put in her. 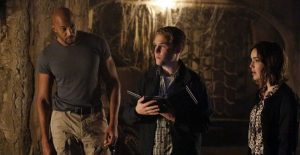 The Koenigs and Trip then have a conversation, where Trip tries to figure out how many of them there are.  They jokingly convince him that there are 13 of them.  May then checks in with Coulson and relays what Skye has learned.   Morse then reports that there is a legend of a guardian on the city and that the locals are scared away. As Mack and Fitz cut their way into the hole, Simmons relays the myth of disappearing guards from long ago at the spot.  Fitz then deploys a bunch of drones to size up the tunnel and when explaining it to Coulson, the drones quit working.

Skye and Raina are then talking about her dad on the plane.  Raina reveals that Skye’s dad discovered her, helped her get off the street and give her guidance. Raina also says that Skye is all her dad has ever wanted. Raina explains that she and Skye aren’t alien just people with special gifts.  Raina then reiterates the blue angel myth and for the first time calls them the Kree. Raina then says that the temple will defend itself against those it doesn’t deem as worthy and that the Obelisk is a guide.

Mack then gets ready to head down into the tunnel to repair the drones and Skye wants to contact them to tell them not to go in, when Doctor Whitehall comes over the PA and says he will shoot them out of the sky.  And, unfortunately, it appears that he is blocking communications.  He says that he is sending over someone to get Raina.  Mack makes it to the bottom of the tunnel, discovering that his radio isn’t working and that the drones are down in the dust.  As he rubs an etching in the floor, something attacks his hand and he is clearly in pain.  The team at the top manages to get Mack to the top but he isn’t able to communicate with them, but then something takes over and Mack drops Coulson with a super punch.

On the plane, we discover that Whitehall is sending Ward over to pick up Raina. Raina is willing to go and Ward offers Skye the chance to come along as well, so he can fulfill his promise of introducing her to her father.  Ward says the deal is off is Skye doesn’t come.  May is trying desperately to get Skye not to trust Ward.  Koenig reminds us all that Ward killed one of his brothers.  Skye decides to come with Ward and Raina makes sure that Skye brings the map of the city.

Morse is trying to talk Mack out of whatever has possessed him, as he has gone all “Hulk Smash”, even surviving several rounds from the knockout gun that Coulson puts in him.  As Mack is fighting everyone, Coulson winds up holding Simmons as she was nearly falling down the tunnel shaft and Fitz hesitates shooting Mack with real bullets.  Morse then hits him with tasers in her staffs, he falls down the tunnel and Coulson immediately orders them to seal the tunnel, much to Morse’s dismay.

Whitehall and Agent 33 meet up and we discover that Ward has gone renegade on him, bringing Skye on board and not taking out the Shield plane.  Whitehall then orders Ward’s plane be shot down.

I give this episode 7 out of 8 Nerds.

Things I am thinking about the series based on this episode: