I really like Clave’s lede to his list of 7 Marvel Teens.  He very cleverly name dropped nine extra teens he wished he could included on his list.  To be honest, as our resident Marvel comics noob (in comparison, at least) I hadn’t even heard of some of his omissions.  Although I came *this close* to putting Butterball on my list, too!

Teen heroes are among my favorite reads.  I’m partway through Avengers Academy right now and loving it.  The team that worked that series did a fantastic job of portraying the naivety, angst, drama, impulse, and hormones of teenagers.  I’m reminded of how confusing and hard the teenage years are…and I didn’t have the additional pressures of heroism thrust upon me!  Thank the Lord.

I set out to build as different a list as I could from Jones’s while anticipating a few Jason will include on his, but I couldn’t bring myself to leave one of his off of my list, so there will be a wee bit of overlap.  But I’ll kick my list off with someone who was left on Clave’s cutting room floor.

I can’t speak of her character now, but Jubilee was my gateway into the Marvel Universe and so holds a special place in my heart.  When the X-Men animated tv show came out 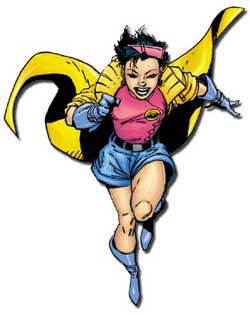 in 1992, Jubilee was front and center as a young girl who discovers she’s a mutant, gets hunted by a sentinel, and is recruited to the Xavier Institute for Higher Learning.

Back then Jubilee couldn’t have looked more teen-y, either: popped collar, oversized shades, wild hair.  And what I appreciate most about Jubilee is she was smart enough to find a mentor.  I believe every teen should do as much, although not every teen will be so lucky as to have Wolverine play the part.

It’s no secret that I love Sam Guthrie as he made the cut for my X-men team build.  He was one of the earliest recruits to Xavier’s New Mutant team which Marvel.com 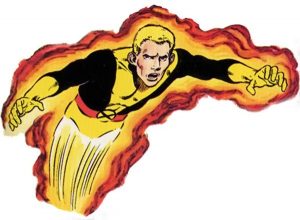 beautifully describes as a team of “kids too young to be X-Men, but old enough to start the training that would allow them to fully understand and harness their profound mutant powers.”

Cannonball took on leadership roles early; a product, I think, of his origin story.  He’s the oldest of ten and takes it upon himself to help support his family after his dad dies, so he takes to the coal mines.  A collapse triggers his mutant abilities, and the rest is history. 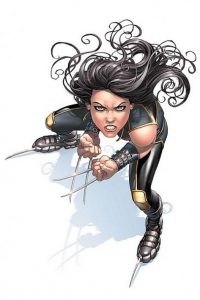 X-23 is a complex character to read.  A clone grown from Wolverine’s DNA, she was raised and trained to kill efficiently.

Essentially X-23 is an organic killing machine, and even after she manages to break away from her masters, the threat of a berserker rage remains constant thanks to a trigger scent.  So on top of all of the usual teen issues, she’s got that on her plate.  Watching her learn to interact with other teens is kinda funny.  She never took a cotillion course and it shows.

A member of Avengers Academy, Finesse has

photographic reflexes which leads her to believe she is Taskmaster’s daughter.  When they explore this in the comics, it is kinda tragic yet beautiful.  She confronts Tasky with the possibility, and he explains that his photographic reflexes take up so much space in his brain that he has trouble remembering what yesterday held – let alone the birth of a daughter years ago.  But they spar, which imprints her moves on his memory so he will carry a little piece of her with him forever.  Inconclusive, but powerful.

During Norman Osborn’s Dark Reign, he snatched up several teens with potentially devastating power sets and tortured them in an attempt to unleash their full potential.  Briggs was among the captured.

Jeremy Briggs has the ability to alter materials on a molecular level, and the one time I’ve seen him in action (pg 19-20 of Avenger’s Academy #14.1) had me begging for more.  He single handedly incapacitates all of the Academy students in two pages and in about that many seconds; leveraging his powers in some pretty novel ways like liquifying Vapor to short-circuit Striker and turning the air in Reptil’s lungs into water – all with naught but a thought. 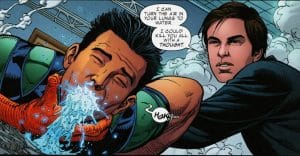 Lot’s of cool potential with that ability.  He certainly appears to lean towards the dark side too, and he would definitely make one mean baddie.  Plus he’s filthy rich as the result of some entrepreneurial application of his power, so there’s that.

Owner of another stinkin’ cool power, Trauma can transform himself into his opponent’s greatest fear.  He messes with your head without messing with your head (as a telepath 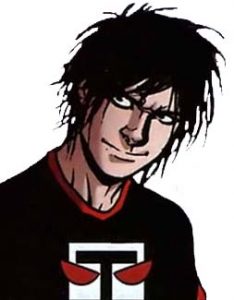 As a psychology major, watching Trauma work is extremely interesting whether it takes places in the field or in an office in his counselor role.  The mind is the control center of the body.  If you manage to compromise the mind, the body too is compromised.  Trauma excels at this task in a visually stimulating way when contrasted with other telepaths who need dialogue boxes or light shows to hint at what is being accomplished by their powers.

Parker could not be omitted.  His inclusion kinda is as simple as that!  Clave covered him well enough in his post, so I won’t tread that ground a second time here.

Well there you have it: seven Marvel U teens you might want to give a looksey.  I highly recommend Avengers Initiative and Avengers Academy as solid teen hero reads.  They’re both on the Marvel Unlimited app in their entireties.  Plus when you’re done with them you’ll be fully prepped to read Avengers Arena which Jason pitched as a must read in a Nerd Alert.

An Open Letter to Joss Whedon

Recap and Review of the Agents of SHIELD Season 2 Finale: SOS

Why did our blockbuster movies not prepare us for the slowpocalypse?