The Digital Future of D&D 5e: Reviewing the Dragon+ App

One thing is for certain, young nerds, they just don’t make ’em like they used to. I won’t regale you with the full history of Dragon magazine, because those words could not even be penned by the immortal bard himself and, indeed, any D&D fan knows there aren’t things in heaven nor earth that can compare the the awesomeness that was the old school Dragon magazines. 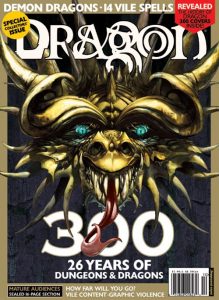 So just trust me when I say that the pages of Dragon magazine produced some of the best fantasy content ever produced, many of its tropes still influencing our RPG video games and fantasy worlds this very day.

When it comes to Dragon magazine, they really don’t make ’em like they used to.

[True story, in the 40 year history of Dungeons and Dragons, the magazines were printed for 31 years of it. They really haven’t been gone that long, it just feels longer because there was a brief period of time in there when Coldplay was relevant.]

But last month, Wizards of the Coast – owners of Dungeons and Dragons – released an app for iOS and Android devices. They called the app Dragon+, presumably the digital successor to the printed Dragon magazine. 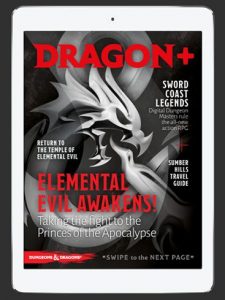 First, the launch. Much has been made about the Dragon+ app being downloaded at higher rates than other magazines like People or Vogue. People are chasing after Dragon+ like a bunch of catnip-addled felines. I’ll admit, that is impressive and builds hope for long term sustainability of the project. Alas, even though we’ve cleared this level of the dungeon, sinister things lurk just down the next corridor.

What people aren’t talking about is the fact that People and Vogue require a paid subscription, while Dragon+ was free to download. Not having to toss a copper piece at Wizards of the Coast undoubtedly boosted the download numbers artificially. What will be the readership floor once/if WotC decides to monetize Dragon+ by charging a subscription?

Still, Dragon+ has received hundreds of positive reviews. The ship is out of the harbor and sailing in the right direction.

It’s BEAUTIFULLY done. The layout, design and artwork are absolutely top notch, and it would be a difficult exercise to look even for a tiny nit to pick.

The reading experience is optimized for a tablet, so you get all the bells and whistles associated with that. Videos are embedded, for example, and there are frequently links back the the D&D website, all done in just right right places and with just the right frequently. Again, it’s beautifully done.

But the content simply isn’t there. This is all fluff; zero crunch. It’s not even soggy Cap’n Crunch, soaking-in-a-bowl-of-milk-all-day crunch. It’s zero crunch. The crunchy bits of lore, mechanics, or new creatures or NPCs are entirely missing. Content wise it in no way feels like the Dragon magazine of yesteryear.

But the fluff is mostly entertaining. It’s almost entirely repurposed marketing copy or material found in their downloadable play guide PDFs. But I enjoy reading a little extra flavor text around the setting the current storyline, even if I did already read the content in their marketing material. Likewise, I enjoyed the article on the goliath class, even if it was repurposed from the free player’s download. It’s well-written free content, so it’s hardly reason to raise a broad sword against that.

In short, it’s all cake, with little meat, so even though it tastes great, it’s hardly satisfying long term.

But though the tales of yore might seem meatier than the meager crumbs we get today, you have to remember that the Forgotten Realms weren’t built in a day. Wizards of the Coast clearly has an interest in making this work. Indeed, the Dragon+ app was the topic of their latest survey, so they’re obviously looking for feedback that will help them navigate a sustainable business model moving forward.

[divider] Speculation: Where to Take the Dragon+ App [/divider] 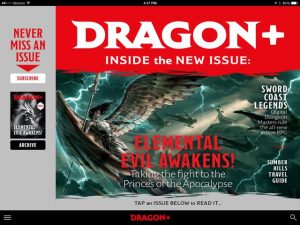 So what is a sustainable business model moving forward? Dragon+ has no ads. Instead, it’s chock full of cross-promotional pieces for their other properties. Clearly the thinking is that by investing just a few resources into repurposing content for Dragon+, WotC can drives sales to their other properties. Use Dragon+ to advertise their own stuff, the thinking goes, and if it satisfies the D&D community, all the better.

Meanwhile, I’m sure they are measuring the usage data that a digital product allows. If fans demand more, I imagine they’ll being to commission new articles to buttress their repurposed marketing copy. Perhaps they’ll even begin to add more crunch to go above and beyond what they are offering in their Unearthed Arcana series, or perhaps even adventure elements.*

Word is that the next issue of Dragon+ will drop in June. That issue will focus on the legacy Dungeons & Dragons has had in video games and will include new details on the upcoming Sword Coast Legends (not that this should leave us surprised), plus updates on the D&D Adventurer’s League.

While beautifully done, this first issue left me wanting. There’s little that I couldn’t have consumed just fine from the web, so the launch of a dedicated app seems curious. Still, I appreciate the effort and are absolutely hopeful for where this might go.

*[Will there be a Dungeon+ app? Holy kobolds, I hope there is a Dungeon+ app. But it’s unlikely. While it would be great to have new adventures to go along new crunch, it seems pretty clear that the investment is into Adventurers League to satisfy that new adventure itch.]

Thanks for reading. If you enjoyed Nerds on Earth, please help us spread the word by using the social media buttons just below.

Is Vision the Linchpin for Phase 3 of the Marvel Cinematic Universe?

Review of Mordenkainen’s Tome of Foes: Is the newest D&D property worth…

Priest Hunters: A Little Irish History to Turn the Tithe in…