Buckle your seats belts, because I’m about to spend around a thousand words gushing about the newest Dragon Ball Z movie – Resurrection F.  And there WILL BE SPOILERS, so if you haven’t seen it stop reading right now because south of that spoiler warning lies no apologies.

Let me begin with the things that stood out as more than a little odd or just plain stupid. First off, the 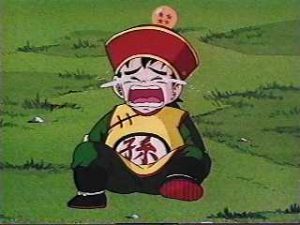 Z-Warriors should be jailed for criminal negligence. As the guardians of Earth, they ought to be policing the dragon balls.

There are obvious problems with keeping all of them in one place, but they absolutely should keep one of them under heavy guard (see Gohan’s hat from early DBZ). Sorbet and the rest of Frieza’s underlings had way too easy a time rounding them up (with a little help from Pilaf, Mai, and Shu).

And what’s more: When Shenron is awakened, Piccolo and Gohan are only slightly troubled by the darkened sky. No investigation is made whatsoever. That’s like being in a building, hearing the fire alarm go off, and keeping your seat. Just plain stupid.

Then when they discover some six months later that Shenron resurrected Frieza, they’re all like ZOMGNOWAY!  Ummm…How many times have those same dragon balls been used to resurrect members of the Z Warriors again? And yet we’re buffeted by choruses of “That’s impossible” and “That can’t be true.” Even from Piccolo who is:

Teamwork is repeatedly harped upon throughout the movie.  Whis chides Goku and Vegeta for not working together while fighting, and later makes the comment that if the two of them were to work together they’d rival even Beerus!

But despite what I thought would prove to be foreshadowing, we don’t get to see Goku and Vegeta cooperate directly. They tag team – one fighting while the other watches – but do not fight together as I’d hoped they might given Whis’s repeated words. And its not like they needed to per se; at least not against Frieza. However, the final lines of dialogue in the movie might indeed point towards that eventuality coming down the pipe before too long.

And before moving on to the gold, one more piece of eyebrow-raising curiosity. The resurrected Frieza claims that with training (something he claims to have never done) he could reach a power level of 1.3 million. That seems awfully low considering that on Namek he claimed his power level to be “over one million” with just his first transformation.

So much is done very well in this movie. Everything that I thought Battle of the Gods got wrong, Resurrection F improved upon.  I’ll take them quickly and in turn:

Frieza’s revenge angle is supremely well done.  Of course Frieza is going to be out for revenge. 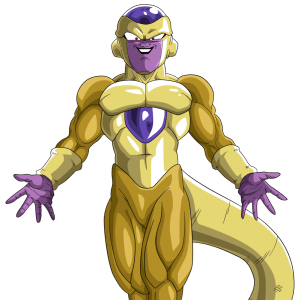 He is 0 for 2 with Super Saiyans (the second one killed him so fast he didn’t even catch his name!) and he carries a universal chip on his shoulder about it.

It’s not just that he is vengeful though; it is just how remarkably pissed he really is. Couple his losing record with his stint in a hell that even the Care Bears would say is too colorful and saccharine and you’ve got an unrivaled blind rage.

And the consequences thereof are extremely well thought out and presented. For instance, Sorbet, Frieza’s interim leader, wisely counsels that Frieza “forget about the saiyans and focus on the rest of the universe.”  That is completely reasonable, but Frieza’s need for vengeance makes him unreasonable when it comes to the saiyans. To say that they’ve got a history would be a massive understatement.

Later on when squaring off against Goku, Frieza says something along the lines of, “I had to come here! That’s what you don’t get. Because the thought of sharing the cosmos with you was unbearable and your death is the only remedy.” Frieza’s thirst for revenge is so strong that it has turned Goku into an object of obsession.

Frieza’s weakness is also well plotted.  Vegeta points out that in his haste to exact his revenge, Frieza did not build up a proper tolerance to his newfound power and form, so therefore could not sustain it. This has precedent in Dragon Ball cannon as far back as the kaio-ken and as recently as a Super Saiyan 3, which made it feel less like a plot device and more like a reality of that universe.

Saving the world was a team effort again.  In my post anticipating F and Super, I listed a hope that we’d see the rest of the Z Warriors get in on the action once again, and that itch was scratched and scratched well in this movie.  Gohan, Piccolo, Tien, Krillin, and even Master Roshi get some serious action. All Roshi’s really done since Dragon Ball is read nudie magazines!  Seeing the crew battling once again was one of my favorite parts of the whole movie.

The humor is there and quality.  I felt like Battle of the Gods went a little too cheesy with 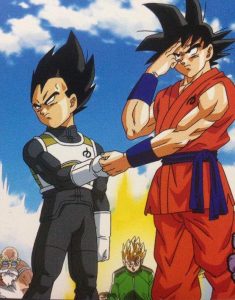 attempts at humor. F totally nails it, though. There’s a solid set of one liners that’ll make you chuckle (my favorite is when Vegeta is told by Whis that he thinks too much during battle and Goku agrees only to be met with Vegeta’s “You’re only thinking less because you’re an idiot.”) and some decent physical comedy as well (like Vegeta having to hold Goku’s hand during Instant Transmission).

Everybody is badass again. Everybody. Even Tien, guys. My favorite examples are Piccolo dropping a dozen of Frieza’s soldiers by merely handing them his weighted clothing, Goku channeling his inner Bruce Lee with a one inch punch of his own, and the way Vegeta reveals his own Super Saiyan God form to Frieza. You watch these moments and think, “Yup, they bad guys are screwed.”  And you’re right.

I’ll close down my swooning with two final thoughts:

1) Goku is finally given a front row seat to the cost of leniency with the likes of baddies like Frieza. I wonder if that will affect him going forward. Maybe he’ll be a little less likely to dispense second chances…HA!  Unlikely.  He’s a dope.

2) It needs to be said who the real hero of Resurrection F is, and it is not Goku or Vegeta or even Whis. No, the real hero is the little blue guppy that brings Whis his staff with Bulma’s message on it. If he hadn’t interrupted their training, the Earth would have been long gone and Goku and Vegeta would have been nonethewiser.

If you’re a DBZ fan, Resurrection F is a must watch. I rented it through XBOX Video in HD for $4.99, but you might find it in a Redox nearby or consider purchasing the DVD or Bluray from Amazon here.