Why is Katniss Everdeen the best hero in literature?

When I say Katniss Everdeen, most people think of Jennifer Lawrence shooting a bow and holding up the Girl Scout salute.

And they wouldn’t be wrong.

However, when I hear the name Katniss, I think of a girl thrust into a horrible situation just to save her sister and starting a revolution. I think of a sixteen year old girl who suddenly has the fate of the world on her shoulders.

And then I think about where I was when I was sixteen.

I obviously was not in District 12. I was in high school worrying about getting my driver’s license and the history test coming up. I was not worrying about where my next meal was coming from or if I was going to survive the night. To say that I had it easy is putting it mildly.

Is Katniss Everdeen the best hero?

Why? Because they are told to. She volunteers to kill other children so she doesn’t die. So her sister doesn’t die.

Now, Katniss is no Black Widow. She’s no Supergirl or Wonder Woman. But she is a hero. She is an everyday hero.

People seem to forget that she’s a teenager. They become irritated with her for becoming angsty. “Why is she being such a brat to Gale?” Because she’s sixteen. Because she just killed all these people so she wouldn’t die. Because she’s suffering from PTSD as bad as any war veteran.

But who is she in regards to today’s young girls? What makes her different from other YA protagonists?

Why is Katniss Everdeen the best hero in literature? 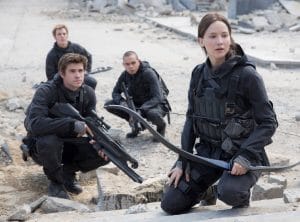 1. She’s strong. So strong and so selfless that she doesn’t hesitate to volunteer to take her sister’s place. Personally, I would have wet my pants if I had been in that crowd at the Reaping. It’s a sick form of the Lottery. “Gather the kids, Ma! We gotta go to The Reaping! One of them may be chosen to die!”

2. She’s thoughtful and caring. She’s put into an arena where she knows she going to have to kill other kids. And she befriends Rue, a girl about her sister’s age from District 11. She takes care of Rue. She loves her. And when Rue is killed (spoiler alert, btw) she mourns her like it is her sister that just died.

And that starts a revolution.

Katniss’s compassion for Rue shows the people watching that this senseless killing does not have to continue. Children should not be forced to kill just for the Capital’s enjoyment. (I would even argue to say that Rue is the true Mockingjay but that’s a completely different article.)

I wanna be like Katniss when I grow up. Let’s ignore the fact that I’m way past the age Katniss starts off as in the first book. But to have her drive, her compassion, her selflessness, and her talent. That is a goal.

And who do young girls have these days to look up to?

Thanks, but no thanks.

Katniss saves herself and the world.

I had Hermione Granger when I was in high school. I had Alanna from Tamora Pierce’s books. A lady knight in a world full of male knights. Yes, please! (But again, that’s another article.)

Katniss gave today’s girls someone between Hermione and Wonder Woman. Katniss is an everyday hero. She doesn’t have magic. She wasn’t born into nobility. She worked for what she had and she fought for what she wanted.

If you can’t look up to that, what can you look up to? Throwing yourself off a cliff like Bella?

Katniss has doubts. She makes mistakes. She cries. She gets angry. She pouts. She also claws her way to success.

And she’s not gorgeous. In the books, she has scars all over her body from the Games and the war she is going into. They have to cake makeup on her to make her “appeal to the masses”.

What’s the Big Deal With Cannibalism in Popular Culture?

How to prepare Yourself for Star Wars Episode VII: The Force Awakens