Who wins the comic book fight between Superman and Wonder Woman?

Who wins it? Superman vs. Wonder Woman

He had gone crazy. At least in her eyes. He had suddenly snapped. He was killing criminals. Even criminals committing petty theft. And the Justice League had decided that he needed to be stopped. But they were scared of him.

So they sent her. 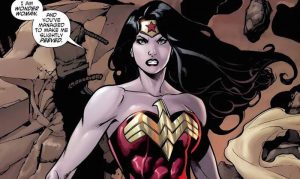 They sent someone who was one of his closest friends.

“Any sight of him, Wonder Woman?” Green Lantern says through their communicator in her ear.

Her eyes scanned below, looking for the usual flash of red and blue. “Nothing as of yet, John. But I shall keep you updated.” She sighs and gives a burst of speed as John signed off, determined to find Superman and stop him.

“But how?” she asks herself. And then she sees him. He’s up ahead of her in the sky, someone clutched in his grip, feet dangling and mouth open in a silent scream.

“Clark!” she shouts, in shock and horror. She speeds up and manages to catch the man right as Superman drops him. She glares at Superman before flying to the ground and gently letting the man down.

“What did you do?” she asks softly.

“I-I parked in a red zone,” he stammered, eyes wide and voice shaking.

She closes her eyes but then shakes her head. Opening her eyes, she pushes the man away from her. “Go,” she says gently. “Get out of here.” He nodded and ran off as she turned back to look at the Man of Steel. He was glaring at her from the sky, his cape fluttering slightly in the wind. 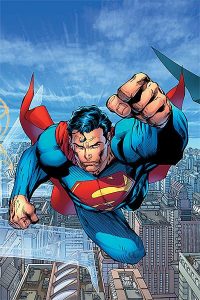 “He is a criminal, Diana,” he growls.

“He parked incorrectly,” she says evenly. “He deserves a ticket at most.”

He moves so quickly that if it weren’t for her Amazonian reflexes, she would be through a building.

“Clark,” she says as she watches him halt just past her. “You must stop this. This is not you.”

“You don’t know who I am, Diana,” he growls. He turns to face her and narrows his eyes. “And you can’t stop me.”

She rolls her eyes and shakes her head. “Stop it, Clark. You are acting like a child.”

“A CHILD?!” He screams. He charges again, faster than before.

She braces herself by putting her crossed wrists in front of her face. He hits with a thud and she skids across the street, his fists on her wrists bracers. They slow to a stop and before he can regain any type of footing, she has her lasso in her hand.

“I am not letting this be drawn out, Clark,” she says before slipping the lasso over his head and letting it tighten around his shoulders, pinning his arms to his sides.

He stiffens in shock and his eyes widen. “Diana?” he says.

“Why, Clark?” she asks, her eyes meeting his.

He seems to be fighting with himself before his head lowers in what seems like shame. “I can’t take it anymore,” he whispers.

“We stop a criminal and another takes their place. It’s just too much.”

“That’s life, Clark. That’s why we fight. We have to protect the world one villain at a time. Not by just killing everyone that parks in a red zone.” She pulls him closer by the lasso and makes him meet her eyes again. “Now, we are going back to the Watchtower and the others will decide what will happen now.”

His shoulders slump and he nods, resigned to his fate. “I’m sorry, Diana.”

“Don’t be sorry,” she says as she takes to the sky. “Just get better.” 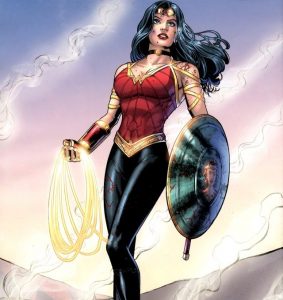 The reader voting poll was even, almost exactly 50/50 on who would win between Wonder Woman and Superman. So, I had to go with Wonder Woman in this fight. She’s just too awesome. And she wouldn’t want to hurt her friend. And would want the fight over as soon as possible.

Which is why this fight was so short. Now as for the judgment of Superman…that’s another story.