A short fan service that traces Luke’s blue lightsaber from its origin to the moment Rey holds it out expectantly and anxiously towards Skywalker at the end of The Force Awakens.  Its packed full of history – containing clips from every episode in the epic series.  I’m sure I’m not alone in excitedly waiting to see how its legend is forged further in episodes VIII and IX!

Say what you (or we!) will about the critical success of BvS, the fact of the matter is that it is making all the moneys.  Box Office Mojo has the worldwide gross over over $500 million already, and its likely to continue climbing.  As the post linked above mentions, BvS set the records for largest pre-summer opening, largest Easter weekend opening, and largest Warner Bros. superhero movie opening.

However, it also set records for largest Friday-to-Sunday decline in box office history with a drop of 55%.  That’s a full 7% worse than the most recent Fantastic Four‘s decline.  And the post accounts for the Easter holiday as well, noting that its Friday-to-Saturday decline was 38% – the second worst in history to…wait for it…The Dark Knight Rises (Another WB production with 40%).

3.  An Open Letter from Wonder Woman to Batman Regarding the Events of Batman v Superman.

At the risk of making this Friday 5 all about BvS, I’m going to include this and yet another link with 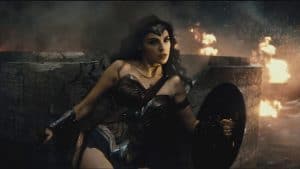 that as the topic because it was inarguably the biggest thing to happen in the nerd realms this week.  That being so, lots of nerdy websites took up arms either for or against the movie, but perhaps none so tongue-in-cheekily as Vox’s Amanda Taub.  In this spoiler-riddled mock letter, she assumes the role of Diana Prince and regretfully informs Bruce Wayne that she will have to decline his offer to form a team and lists several biting – but now canonical – reasons why.  Definitely a fun read!

4. MCU Supercut: The Road to the Civil War

In a little more than a month, Captain America: Civil War will hit theaters and we couldn’t be more excited.  Jason keeps a running countdown to the day in our Slack chat!  MCUExchange whipped up a spectacularly done supercut of the Marvel movies that traces the motivations and evolutions of Stark and Rogers as we approach their ideological conflict and all-out superhero brawl come May 6.  It is seven minutes very well spent.

5. Superman and the Damage Done.

This entry comes in under the wire (I’m editing this post after midnight, but this is as Friday as Friday gets amirite?)  Devin Faraci writes a very impassioned requiem for Superman as an icon in Snyder’s hands, and its difficult to find a weak point in his analysis.  His final thoughts echo those of Earth Nerd Ross in our Weekly Nerd chat on BvS.:

Of course you can’t even bring a four year old to see Batman v Superman, but even if you did – and if they didn’t run screaming from the film’s excessive violence and darkness – what kind of a Superman would they find waiting for them? Not a hero…And there are no current cartoons to fill in the gap, no explicitly kid-friendly comics.

There’s even a change.org petition to have Snyder removed from any Justice League efforts as a direct result of his mishandling of the DC poster boys.

Listen, I get that people are upset and they need a figure – call him a scapegoat, even – at which to point fingers, but this petition has less hope in it than Superman inspired in the world in BvS…which was almost none.  The likelihood that WB axes Snyder is abysmally low not because of what he’s done to the iconography of Batman or Superman, but because of what he’s done with the greatest and most influential of America’s iconography: $.

And I’m not going to lie:  My eyes would miss Snyder.  Is he a great writer?  Eh, no.  But the dude knows how to make stuff visually stimulating.  That said, I actually kinda want him to stick around in DC’s cinematic universe.  If they ever get the story elements and characterizations sorted out, they’re going to have one heck of a machine!

So sign the petition…or not.  I don’t think it’ll do much beyond granting you a sense of righteousness and netting you a participation ribbon, but by all means!

Those are our 5 geek culture links for this week. Join us next Friday for another Friday 5. Until then, join us on Facebook or in the comments, string something from nerd culture we may have missed.

The Gift of Disney

Wrap It Up: Does The Rise of Skywalker Close the Star Wars Saga?

Recap and Review of The Mandalorian, S1.E7: Chapter Seven “The Reckoning”

Recap and Review of The Mandalorian, S1.E5: Chapter Five “The Gunslinger”