Who wins the Marvel Final Round fight between Wolverine (who bested Iron Man in Round One; and Captain America in Round Two) and Thor (who toppled Storm in Round 1, then Doctor Strange in Round 2)?  Read on to discover the final result of Thor vs. Wolverine!

As Logan knocked back another shot of whiskey, he felt the wind move through the dark and smoky bar. A large man in a trench coat walked towards him and asked, “May I sit?”

“It’s a free country pal,” remarked Logan without even looking up from his empty glass. “Bar keep.  Another,” barked Logan

“And I’ll have the same,” exclaimed the man in the coat.

“So, what brings you to this seedy little joint stranger?” asked the Bartender. “We don’t get nothing but regulars here.”

Logan was thankful the bar tender asked the question that he certainly wanted the answer to and he eagerly awaited the answer from the somewhat familiar looking man.

Before the man in the coat could finish his sentence, Wolverine was up at the ready, his claws extracted (SNIKT)! 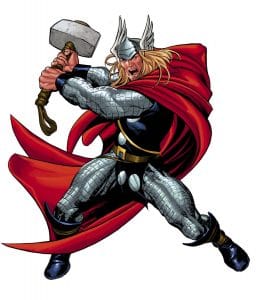 The man in the coat also stood, nearly a head taller than Logan and took off the coat. There he was, in all his splendor: the God of Thunder. Thor. “Leave this place!” He shouted to the bar full of stunned lumber jacks. And as they all shuffled out, the two warriors waited. Staring at one another, ready for the first strike.

“What are you waiting for!?” asked Logan.

Thor paused, “Logan, many great men and women have faced off recently. Tonight, will be another great battle. Likely ending with one of us destroyed. For you and I both know, once we start, we must finish.”

Wolverine struck and his haymaker was met with Mjolnir, sending vibrations through the claws on Wolverine’s right hand. The magical strength of Thor’s great hammer had not been exaggerated one bit.

“Logan, you will acquiesce or you will be destroyed. And the name is Thor, son of Odin. I will not stand for this disrespect by a mere mortal!” Thor’s voice echoed with authority.

“Who you callin’ mortal? Do you know who you are dealing with?” As Logan finished his thought, Thor swung the gigantic hammer toward the head of his fellow combatant. Wolverine ducked and sent two swings in the direction of Thor’s shoulders, each swipe sliding off of his chain mail.

“Well there ain’t any armor on your neck.”

He then sent two more swipes at Thor’s head this time. But both were blocked by the hammer and they sent violent vibrations through him once again. Shocked and taken back, Logan was almost at a loss for words.

Logan wasted no time, he leapt at the God of Thunder claws out. Thor side stepped the feeble attack 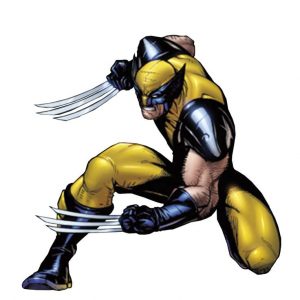 as Wolverine knew he would. Logan brought his legs up to meet the bar and sprung himself backwards as he swiped fiercely at Thor.

“AAAAAARRRRGGGGGG!!!!” Yelled the Asgardian and there, at his own feet, lay his left hand.

Quickly Thor summoned lightning from his hammer to cauterize the wound before the loss of too much blood.

“What? That sting a little?” Retorted Logan as he took two ferocious swings at Thor. Each blow, again, blocked by the Hammer from which Thor drew all his godly power.

Logan thought, “I wish I would have got the hand with the hammer in it.”

Just then Thor reached up and summoned the full force of his lightning and blasted Wolverine. As the waves of crackling light flowed through Wolverine, the smell of burning flesh filled the watering hole and the screams from Logan rattled the glass in the small windows.

As he lay there, Thor watched with amazement as his flesh repaired itself almost instantaneously.

“What devil’s magic is this?” Thor said with astonishment.

Wolverine picked himself up from the floor as his flesh continued to heal, “I told you, I ain’t mortal, bub. It’s gonna take a lot more than that for you to survive this fight.”

Wolverine brought his fist back and lunged once again at Thor with all his might and once again Thor met his hand with the mighty Mjolnir; the vibrations running throughout Logan’s entire adamantium skeleton this time.

Thor once again summoned lightning and sent it pulsating through the body of Wolverine; this time for twice as long. Logan lay stunned – his flesh, tissue, and muscle had nearly melted completely away.

As his body began regenerating all it had lost to the lightning attack, Wolverine charged Thor. Thor met his face with a strike from his hammer that most assuredly dented Logan’s adamantium skull. Dazed Logan tried to regain himself but it was too late…Thor wrapped him in a bear hug from behind, hands directly at his side and he took flight.

Thor took Logan right through the roof of his favorite dive bar and into the atmosphere. Logan’s skin was burning off faster than it could regenerate now. He also struggled to catch his breath as they entered space. Thor took Logan to the surface of the Earth’s moon and laid him down.

There the still body of Logan, the Wolverine, lay. Defeated at the hands of Odin’s son. But a flicker of life still existed in this freak of science’s body.

Thor knew what he had to do. He placed Mjolnir above the face of Logan and dropped it. With a metallic smash, Mjolnir met the surface of the moon. And there it would remain, to hold down Thor’s most formidable opponent. For now.

With this, his third victory, Thor goes on to represent Marvel against the DC bracket’s champion once the dust settles in the Wonder Woman v Batman final!