When to Use a Map in Your D&D Games

Recently I tried my hand at the role of Dungeon Master, and I had a list of things that I was pretty concerned about going in when it came to my performance. I just wanted to do well by my PCs!

And for the most part I did a decent job for a newb. However I now have a new list: things I need to improve upon when it comes to prepping and executing the adventure.

One of the top items on that list: I’ve got to figure out how best to leverage maps and when to completely leave them out.

Here’s the thing – The adventure books are chock full of sweet maps ranging from the smallest inn’s floor plan to a bird’s eye view of the entire region. I can’t top that! The temptation to Command+P or copy those bad boys and toss them down before the PCs was real. But I ran into a few complications when it came to that approach.

When NOT to Use Maps

I ran my PCs through Curse of Strahd’s “Death House” (Appendix B in the manual or available in its entirety here for frizzle) first to level them up a bit before leading them through the rest of this particularly tough adventure.  The house’s maps cover three floors, an attic, and the basement/dungeon level including furniture placement, door and window locations, and even where stuffed hunting trophies are posted throughout. 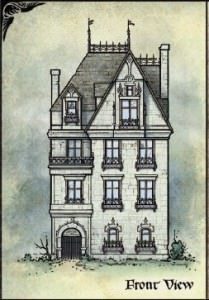 But it also shows:

Those things are great…on my side of the DM screen. But if placed before the PCs the S’s and X’s raise red flags or pique curiosity.

That coupled with the tight quarters of the house itself lead me to steer the party narratively instead of physically. It did get kind of clunky saying things like, “There are four doors in this room,” but my PCs were plenty smart enough to devise their own systematic way of navigating. Hey guys, let’s tackle the doors from left to right moving clockwise.

And what’s to stop them from mapping the house themselves based on what I exposit?  Most had some parchment in their gear!

Now they didn’t get to revel in the quarter inch depiction of tables and chairs like I did, but they also had to work to uncover the house’s secrets – which I much preferred.

When to TOTALLY Use Maps

Bird’s eye view of the region? Overview of a city of township? Go ahead and hand them the provided maps. They’re extremely well done and they don’t give away much; just a few bubbles with letters in them.

But you run into a similar problem I experienced with the house when navigating your party through a dungeon. There are a few different approaches you can take to avoid that problem while still providing a physical map to your PCs.

With that last approach, you’ve got a few options (option-ception!): 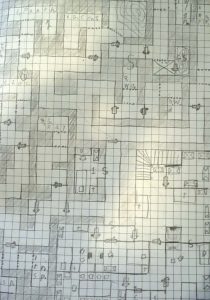 When last I was a PC, the DM had such a vinyl map and roughly sketched as we went. Since that was my only experience, I figured that’s what I would do as a DM, too.

Only it didn’t quite go as planned! I personally felt that having to stop the narrative to frame in a room was jarring. On top of that, I couldn’t get everything to line up right! Not my jam.

So as I sat down to prepare for session #2, I broke out my Easy Roller Dice Co. map and spent some time translating the book’s maps onto the vinyl with the included markers. This was way more fun than the anxiety of drawing the maps LIVE, and then failing miserably at it.

I almost immediately made a mistake, but a mist of Windex and a quick swipe later and all was well.  My PCs will be none the wiser!  (Well…they would be if they weren’t among our readers…oops!)

This particular vinyl map is 27×23 which is smaller than the one my DM used, but I kinda appreciated that. When we had to flip his over, everyone had to remove their snacks, drinks, dice, pads, pencils, etc. in order to accomplish as much.  Easy Roller Dice Co‘s fits well in the center of the table without having to rest beneath our other paraphernalia.

It’s smaller size may mean that you have to occasionally scale a map down (i.e. 1 square no longer 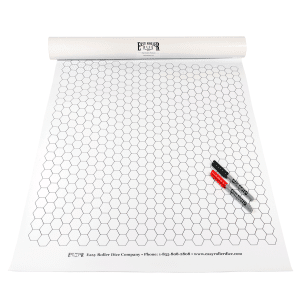 equates to 5ft), you have to flip it over to pick up the adventure on the hex side where you’ve already got the continuation of map sketched, or you’ve got to call for a small break as you erase the map and populate its squares with what comes next. But none of those are particularly big or bad problems.

As slowly as we tend to move through dungeons, a break might actually be welcome!  And I personally prefer any of those methods to the nightmare that was me very poorly free-handing the maps with my PCs as an audience.

The Easy Roller Dice Co. double-sided gaming mat will be my frequent companion on future campaigns. I won’t bust it out for just any and every locale because I don’t think that’s necessary when a decent narrative or the included maps will serve without spoilers. But when the opportunity presents itself, I will definitely unfurl the map and use some notecards as a makeshift fog of war to physically compliment the narrative.

What about you?  What are your thoughts on and experiences with maps in a tabletop RPG?  Tell us about the good, the bad, and the ugly in the comments below!

And here’s where you can grab a vinyl Easy Roller map. They have great dice too!