The Silmarillion, Nerdsplained: What are the Silmarils?

Last time we explained The Silmarillion, we took a look at the Valar, the ruling spirits of Middle Earth. Now it’s time to dive into a bit more from The Silmarillion, J.R.R. Tolkien’s masterwork, by nerdsplaining the jewels that give the book its name – the Silmarils.

Explaining The Silmarillion: So, the SIlmarils… What Are They?

The Silmarils were three jewels crafted by Feanor, one of the greatest of the Noldor, an elder family of elves. Feanor had the greatest skill in craftsmanship of all the elves. So as a challenge for himself, he sought to capture the light of the Trees of Valinor, which provided light to the whole world.

More than that, the light of the Trees was beautiful. Ergo, the Silmarils were the most beautiful thing ever created by elves or men.

Explaining The Silmarillion: So What?

The evil Valar, Melkor, hated the light from the Trees of Valinor. So he recruited Ungoliant, the greatest and most evil giant spider in the history of creation. (Shelob in Lord of the Rings is the last and least of Ungoliant’s lineage.)

Together, Melkor and Ungoliant caught the Valar unawares and destroyed the Trees, plunging the world into darkness. Except for the Silmarils, which contained the light from the Trees.

Explaining The Silmarillion: Oh, so the Silmarils are Middle Earth’s sun and moon?

Nope. During the attack on Valinor, Melkor also stole the Silmarils from Feanor’s home and ran away to his stronghold Thangorodrim, which in typical First Age fashion was bigger and stronger and more evil than its Third Age counterpart Barad Dur. Then, Melkor added the Silmarils to his evil overlord crown, adding insult to injury. Melkor spent most of his time underground and inside Thangorodrim, so the light of the Silmarils were wasted.

Oh, it gets worse. Feanor wasn’t just the most gifted craftsman among the elves. He was also the biggest hothead. He, along with his seven sons, swore an incredibly rash and unbreakable oath. They swore in the name of Illuvatar (God) himself that they would never rest until the Silmarils were back in their possession, and that they would make unceasing war on anyone who withheld them. At the time, Melkor held all three Silmarils, so the oath didn’t seem so rash.

But even worse than that, Feanor and his people (the Noldor) decided to leave Valinor in the worst way possible. They needed ships to cross the ocean back to Middle Earth, but didn’t have any of their own. So they asked another group of elves, the Teleri, for their ships. The Teleri refused, saying that leaving Valinor wasn’t in the will of the Valar. Tempers flared, weapons were drawn, and elf killed elf for the first time in history.

Explaining The Silmarillion: Oh, I see how that could end badly…

Yep. Throughout the course of the First Age, EVERYBODY wanted to get the Silmarils. And some were successful. A man named Beren wanted to marry Luthien, daughter of King Thingol and the most beautiful elf maiden in the world. He asked Thingol’s permission to marry Luthien, and Thingol told him that if he could bring back a Silmaril from Melkor’s crown that he would allow Beren to marry his daughter. He, of course, expected Beren to be killed in the attempt. Except that Beren succeeded, and suddenly Thingol had a Silmaril in his possession. Feanor’s sons attempted to fulfill their oath by attacking Doriath, Thingol’s kingdom. And so, for the second time in history, Feanor and his sons, and their rash oath, were responsible for elf killing elf.

Explaining The Silmarillion: Yeesh… All this for three jewels?

Don’t forget, the Silmarils were the last remaining vestige of the light from the Trees of Valinor in creation. They were beautiful beyond compare, and exceedingly rare. Perhaps Tolkien was making a statement about humanity and our propensity towards avarice and destruction…

Explaining The Silmarillion: Yeah… Okay… So how did things turn out? 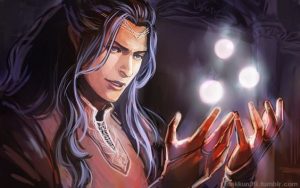 Well, there was a prophecy that the fate of the whole world would be wrapped up in the Silmarils, and that one jewel would remain in each of the main three domains of Arda – earth, air, and water. The Silmaril that Beren stole from Melkor’s crown eventually ended up in the hands of Earendil, a man, who sailed west with it to seek out the Valar’s help in the fight against Melkor.

He reached the Undying Lands where they live. They heard his plea for help, but couldn’t allow him to sail back to Middle Earth now that he was immortal (simply stepping foot in Valinor has that effect, apparently), so they took him, his ship, and the Silmaril he carried, and placed them in the heavens to sail for all eternity. That Silmaril became the elves’ most beloved star.

The other two Silmarils were recovered after the Valar rose up in power and finally defeated Melkor once and for all. But, because of their terrible oath, Feanor’s sons Maedhros and Maglor couldn’t rest and stole them from the Valar. But, because of their crimes over the years in effort to recover the Silmarils, the jewels refused their right of possession, burning their hands and driving them mad. Maedhros threw himself and his Silmaril into a fiery pit. Maglor threw his into the deep sea. Thus, the prophecy was fulfilled.

Explaining The Silmarillion: So these things were a big deal, huh?

Well, yeah. Ultimately, like 90% of the war and conflict that happens during the First Age can be traced back to the Silmarils in some way. They were the defining element of the First Age of Middle Earth, the cause of tons of conflict and war (including all three times that elf has killed elf in the history of Middle Earth), and the ruin of what should have been one of the greatest houses of elves. So, yeah, they’re a big deal.

Thanks for reading Nerds on Earth. If you’ve enjoyed something on the site, please let us know in the comments or do us a solid by sharing using the social media buttons just below.