Many of the best science fiction books speak in meaningful ways to real world trauma and issues. This is true of Rarity from the Hollow, the debut novel from Robert Eggleton.

So I traveled eastward and captured Robert, bringing him back to Nerds on Earth HQ. He was questioned thoroughly, then released unharmed.

Clave: Robert, this is a very nerdy website, so why don’t you start us off by sharing your origin story? 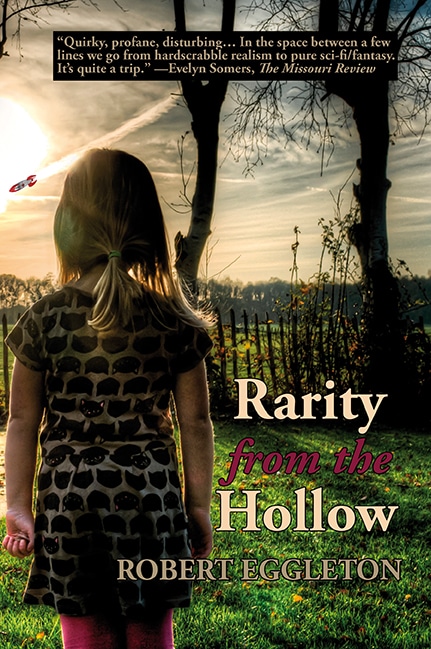 Robert: Hi, Clave. Thanks for inviting me to tell you a little about myself and my debut novel, Rarity from the Hollow. I’m a retired children’s psychotherapist with over forty years of experience in the field of child advocacy. I live in West Virginia[1], an impoverished state in the U.S. One of its hollows is the Earth setting for the story.

In 1964, I began working in a drug store. It served as the only bookstore for my small town with an aisle devoted to paperbacks[2]. The manager would let me take one home if I returned it in same-as-new condition, then another, then a bunch of others. That’s when I fell in love with science fiction. The same year, I won the eighth-grade short story competition at school. I dreamed of becoming a rich and famous author.

I wrote and wrote, read and read, and shared my enthusiasm with friends, family and neighbors, but had no idea how to pursue my ambition. I began college in 1969 and between it and work, writing science fiction took a back seat. After I earned my Master’s Degree in 1977, nonfiction became my forte – several publications in the field of child welfare which sublimated my interest in writing science fiction until 2006.

At that time, I was working in an intensive children’s mental health day program. A lot of the kids were in treatment because of abuse, some sexually. Part of my job was to facilitate group therapy sessions. One day, I met a skinny girl with stringy brown hair who spoke fervently about her hopes and dreams of finding a permanent loving family. She inspired me to pursue my own dream of writing science fiction. I named her Lacy Dawn and the project of writing science fiction using least likely heroes began. I’ve been writing about her ever since.

Clave: Wow, what a gift that drug store owner gave you in all those books, and I’m glad your story took the turn back to sci-fi. Tell us a little bit about Rarity from the Hollow.

Robert: Rarity from the Hollow is a satiric, tragic, and comical science fiction adventure that addresses serious social problems. In a nutshell, it’s about a traumatized little girl who learns to be the Savior of the Universe with the help of an alien boyfriend, for when she’s old enough to have one, and her mentally ill family and friends. It’s up to readers to decide which scenes are dissociative as a result of Lacy Dawn’s severe traumas and which scenes are pure fantasy and science fiction.

To prepare Lacy for her coming task, she is being schooled daily via direct downloads into her brain. Some of the courses tell her how to apply magic to resolve everyday problems much more pressing to her than a universe in big trouble, like those at home and at school. She doesn’t mind saving the universe, but saving her own family and friends just has to come first.

In the story, the home of universal governance is on planet Shptiludrp (Shop Until You Drop) where the fate of planets are determined based on consumerism skills – a longstanding feud between capitalism and socialism. It is up to Lacy’s team to figure out why the conflict has escalated to the point of imminent threat and how to solve the problem.

If she is successful, Earth would be removed from the list of expendable planets and would not be destroyed by a mineral extraction process called shrinkage. Will Lacy’s genetic predisposition which has been manipulated for millennia, her final trainings by the android, and the magic that runs on the female side the family be enough for her to save the Universe, Earth, and, most importantly, protect her own family?

Clave: Considering your background, you are pretty close to the material. With what you saw in your work, did it feel important for you to write this book?

Robert: The characters in Rarity from the Hollow are more real than not, and based on my work as a child advocate – the healthy and mentally ill, rich and poor, powerful and powerless, victims and perpetrators…. Elements of the story are also based on my personal experiences, having been born into a very poor family with an alcoholic father victimized by war-related trauma.

On that personal side, writing fiction for me began as my best escape from childhood horrors related to domestic violence and poverty. Plus, instilled by my mother, I had an early interest in civil rights and social justice that blossomed into activism and influenced my decision to major in social work in college.

I had also been influenced by great science fiction writers. The impact of speculative fiction on my world view and politics was especially potent in the 1960s when Ellison, Aldiss, Herbert, and others wrote about the stuff that many American teens at the time were reflecting upon, me included – social and political issues at a tumultuous time. Protests against increasing militarism during the Vietnam War were fueled by the writings of Ellison and Vonnegut when passions ran deep.

Based on my experience, of all social causes, the systems in place to help maltreated children are woefully inadequate. By the time that I got back to seriously writing science fiction in 2006, I wasn’t merely passionate, I was boiling. Perhaps to defuse my emotions and to aid concentration, I broadened and began to be influenced by complicated international interests well beyond the maltreated kids that I’d personally met in my home state: the child world-wide sex trade, feminism…. It’s a long list. Did you know that the U.S. is the only member of the U.N. that has not ratified the international declaration of the rights of the child?

Taking a step back and controlling my moral anger helped my writing. Increasingly, I have appreciated that many readers want entertainment instead of memoirs or rants. It paid off when writing Rarity from the Hollow:

“…a hillbilly version of Hitchhiker’s Guide to the Galaxy, only instead of the earth being destroyed to make way for a hyperspace bypass, Lacy Dawn must…The author has managed to do what I would have thought impossible; taken serious subjects like poverty, ignorance, abuse, and written about them with tongue-in-cheek humor without trivializing them…Eggleton sucks you into the Hollow, dunks you in the creek, rolls you in the mud, and splays you in the sun to dry off. Tucked between the folds of humor are some profound observations on human nature and modern society that you have to read to appreciate…it’s a funny book that most sci-fi fans will thoroughly enjoy.” – Awesome Indies

Sensitizing readers about the prevention of child maltreatment through a comical and satiric science fiction continues and will until I’m gone from this tiny planet.

Clave: As someone who grew up in the coal fields of West Virginia, I’ve seen with my own eyes some of that heavy stuff back in the hollows. Is that where are coming from in donating the books proceeds to a child abuse prevention program?

Robert: Since you’ve been there, Clave, I’m sure that you feel what I’m talking about. Yes, author proceeds from Rarity from the Hollow have been donated to a child abuse prevention agency.

I worked for Children’s Home Society of West Virginia in the early 1980s and stand behind its good works. Today, it serves more than 13,000 children and families each year, likely on an increasingly strained budget because of the problems facing coal miners.

Clave: What other things are you nerding out on?

Robert: Maybe I’ve come full circle because writing, as when I was a child, is again my primary recreation. I’ve been reading All the Birds in the Sky by Charlie Jane Anders and it’s okay. Maybe I’ll get more into it and the problem is probably my own preoccupation with promotion of Rarity from the Hollow. I’m reading YA science fiction / fantasy novel by an unknown author but I don’t want to name it because I’m struggling even more with that one.

Video games are dangerous for me. I get addicted so easily. Then, I can’t seem to break free and get anything else done. I started playing Phantom Pain, but I just have to stop, and I will, tomorrow, I hope….

I love UFOlogy. It’s a masterpiece but, man, comics have gone up in price. We get the SyFy Channel. I’m totally looking forward to the return of The Expanse at the first of next year. Sure, it’s an overdone theme, but one that I enjoy.

I can’t wait for Geostorm’s release by Daniel Bloom, who coined the term Cli Fi as a subgenre of science fiction focused on climate change. All in all, I’m not very exciting. Not much going on in my little corner of a small place on a tiny planet.

Thanks again, Clave, for inviting me to talk about myself and my novel.

Clave: Thank you, Robert. I’ll let folks know where they can find you on Facebook or on Twitter, but most of all, where they can get Rarity from the Hollow.

[1] Clave is also from West Virginia.
[2] But did they have comics?