Here’s your change to pull the ‘chute: I’m going to try and convince you to give a Warhammer 40,000 book a try. If you aren’t interested in the least, hit the back button. Our bounce rate will take a hit, but I’ll understand. If you have even the tiniest curiosity, then read on, as I think I have something great for you.

But I’m going to recommend a book to you that is not only out of print, it’s also steeped in lore. I don’t know what I am thinking either, but I think we can get to a point where we’re high-fiving at the end of this.

I like pulpy fantasy and science fiction. I like action. I like interesting characters. I like stories that stay moving, but have just enough layers to them to keep my guessing. I also tend toward commercial properties, rather than a standalone award-winning avant guard science fiction novel or whatever.

I tend toward commercial properties for two reasons: 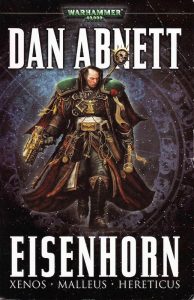 Dan Abnett wrote a flat-out excellent Warhammer 40,000 book when he penned the Eisenhorn series. Comprised of three books–Xenos, Malleus, and Hereticus–its set in the grimdark far future of the Warhammer 40,000 universe.

The main character is Inquisitor Gregor Eisenhorn and it follows his career as he sets out to ruthlessly strike down heretics, even as he battles not becoming one. It includes of course the crew that travels with him. It’s in large part a detective story, but it has an interplanetary setting, and oozes action and interesting creatures and settings.

Sure, it is part of the Warhammer 40,000 universe, which I didn’t know a lick about before I read the book. And that’s in part why I can wholeheartedly recommend it to you, but let me spell that out, plus give you many more:

Eisenhorn is a great intro to Warhammer 40,000. Although I was completely unfamiliar with Warhammer 40,000, I was able to pluck out the key ideas with ease. Not only did Dan Abnett give me a intro to 40K through Eisenhorn, but he also did a good job of allowing Eisenhorn to stand alone. While I don’t think I will end up reading more 40K books, I now feel like I have the big picture, plus got to read a great story to boot.

Dan Abnett is an amazing writer. It’s almost like there is just a tiny baby step over Gooney Otter Creek to place him in the conversation of one of science fiction’s very best contemporary writers.

It’s part of a larger world. If Eisenhorn turns out to be your jam, then you are in luck. Warhammer 40,000 is one of the more enduring properties of nerdom. There are board games, video games, volumes of books, and of course miniatures, all of which allow fun opportunities to nerd out even more. But it’s hella confusing to try to break into a pretty with decades of lore. Since Eisenhorn makes for a nice intro, what would you have to lose in giving it a try?

Alas, the Eisenhorn omnibus is out of print, as I mentioned earlier in the introduction. I don’t know why the publisher would let something this cherry slip through their fingers, but the only way to get it collected is from a third-party seller. It’s going for about $40 right now.

The good news is that each of the individual volumes are still available. Here’s part 1, Xenos. That works out well actually, as it gives you an opportunity try the first bite. And I wholeheartedly recommend  you take that opportunity.

Review of Acquire, the Board Game with Many More Buyers than Sellers

Necromunda: Hired Gun and More of This Week’s News for Nerds

Interview with Robert Eggleton, Author of Rarity from the…